Accessibility links
Senate Set to Vote to Expand Stem-Cell Research The Senate on Monday takes up a bill likely to pass and prompt the first veto of the Bush presidency. It would relax restrictions the president himself imposed on funding of research using stem cells from human embryos. 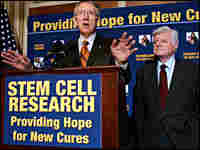 BILLS BEFORE THE SENATE

The Senate will begin 12 hours of debate Monday — with votes to follow on Tuesday — on three separate stem-cell bills. Under an agreement reached to bring the bills to the Senate floor, each will have to win 60 votes in order to pass, and no amendments will be permitted. A look at the bills up for a vote:

HR 810: This is the primary bill in the current debate. It would expand federal funding for research on embryonic stem cells beyond the limits set by President Bush in August 2001. For example, it would allow federal funding for research on cell lines derived from embryos left over from in vitro fertilization attempts after Aug. 9, 2001. The bill would also impose ethical protections on the research, including requirements that donors not receive money or other inducements for the embryos.

The House bill passed 238-194 in May 2005. Because no amendments are allowed under the Senate deal, if the bills passes, it will go directly to the president. If President Bush vetoes it, as promised, it would become the first veto of the Bush presidency.

The other two bills are far less controversial; both are expected to pass easily.

S 2754: This bill would authorize funding for the National Institutes of Health to research ways to obtain "pluripotent" stem cells without harming human embryos.

The legislation is sponsored by Pennsylvania's Republican senators, Arlen Specter and Rick Santorum, who are on opposite sides of HR 810, the main bill to expand federal funding. Specter supports HR 810; Santorum opposes it.

S 3504: Known as the Fetus Farming Prohibition Act of 2006, this bill was introduced on June 13. It is designed to prevent scientists from soliciting or using tissue from a woman who became pregnant for the express purpose of donating fetal tissue for research. It also bans the use of human tissue that was gestated in the uterus of a non-human animal. The measure is sponsored by Santorum and Sen. Sam Brownback (R-KS), both of whom are vocal opponents of HR 810. — Julie Rovner

When it comes to embryonic stem cells, you can find just about any opinion you like: They are an untapped elixir of life; they will lead to embryo "farms" where potential lives are snuffed out. NPR science correspondent Joe Palca looks at the facts and fictions behind stem-cell science:

The first embryonic stem cells were isolated in mice in 1981. But it wasn't until 1998 that researchers managed to derive stem cells from human embryos. That kicked into full gear an ethical debate that continues to this day. A look at key moments in the controversy so far:

A bill on stem-cell research is likely to prompt the first veto of the Bush presidency. The Senate is about to take up legislation that eases restrictions on funding for research using stem cells from human embryos. The president himself imposed those restrictions.

By Tuesday night, the Senate will vote on three separate stem-cell bills. All are expected to pass.

Two are intended to provide political cover for the president, so he can veto the third. That one, called HR 810, originally passed the House in May 2005. It would in effect overturn President Bush's own policy -- which currently allows federal funding of embryonic stem-cell research, but only on stem cell lines that were already in existence in August of 2001. The president hasn't made any public comments on the issue recently, but he made his feelings about the House bill clear last year.

"This bill would take us across a critical ethical line by creating new incentives for the ongoing destruction of emerging human life," Bush said after the House passed the bill last May. "Crossing this line would be a great mistake."

Advocates of embryonic stem-cell research disagree. They say harnessing the power of embryonic stem cells could lead to treatments or cures for such intractable ailments as diabetes, Parkinsons' disease, and spinal cord injuries. Sean Tipton, of the Coalition for the Advancement of Medical Research, said it quickly became apparent that the president's limits were too tight, and the cell lines available were insufficient.

"What that is doing is hampering our best scientists," Tipton says. "It's forcing the bst American scientists to use suboptimate research tools. And we find that policy unacceptable."

With polls showing broad public support, the House passed a bipartisan bill that would allow research on newer cell lines -- but still, only those from embryos left over from in vitro fertilization attempts. Fifty House Republicans broke with the president and voted for the bill. And it has the support of many Republicans in the Senate as well, led by Utah's Orrin Hatch.

Still, opponents of the measure, like Richard Doerflinger of the National Conference of Catholic Bishops, say backers of the bill are misreading the public's sentiment.

"They're not setting aside the moral issues," Doerflinger says. "If you tell them there are some avenues that requiring destroying human embryos, and others that do not, they clearly prefer [exhausting] the other means first before we even would consider figuring out whether we have to cross that other line."

That is exactly what the other two bills the Senate will take up are aimed at. One would prohibit something no serious scientist is proposing -- "fetus farming": basically, implanting an embryo into a woman's womb so she can grow it to fetal stage, then aborting it to get the stem cells.

The other bill, also backed by religious conservatives like Doerflinger, would expand funding for research to find alternative ways to get cells that can turn into any other cell type in the body. So far, this seems to be a property found only in embryonic stem cells. And so far, they're only available by destroying embryos.

Embryonic stem-cell research proponents like Sean Tipton say that, while they don't object to those additional bills, they are not substitutes for the House-passed measure.

"The other two bills do nothing to move science forward,"Tipton says. "We're not going to let people hide behind them and pretend they're for stem cell research, when really their vote says they're not. "

The addition of the two bills, of course, is to give conservatives something to vote for, and President Bush something to sign. But Colorado Democrat Rep. Diana DeGette, one of the lead sponsors of the House bill, say vetoing her measure would be a mistake for the president.

"This is not like flag burning," DeGette says. "It's not a wedge issue. Seventy-two percent of Americans, including Nancy Reagan and Orrin Hatch, support this bill."