Accessibility links
Play's the Thing at Rochester Museum The Strong National Museum of Play, located in Rochester, N.Y., is a giant laboratory for exploring the role of play in society. Museum representative Scott Eberle tells Scott Simon it's a grown-up place for kids of all ages.

The Strong National Museum of Play, located in Rochester, N.Y., is a giant laboratory for exploring the role of play in society. Museum representative Scott Eberle tells Scott Simon it's a grown-up place for kids of all ages. 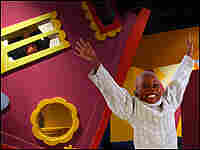 A young man enjoys the upside-down room, one of several venues for play at the Strong Museum. Strong National Museum of Play hide caption 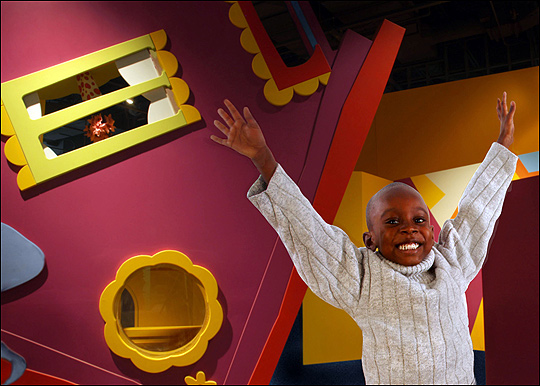 A young man enjoys the upside-down room, one of several venues for play at the Strong Museum.

There's a place where children can skip along the yellow brick road, storm a fairy tale castle or land on a shipwrecked adventure island. And with all due respect to Michael Jackson, it's not the Neverland Ranch. It's the news Strong National Museum of Play, which has now opened in Rochester, N.Y.

Scott Eberle is the director of play studies at the museum, and the developer of the field of play exhibit. He joins us from his office in Buffalo. Mr. Eberle, thanks very much for being with us.

SIMON: And when we say that people can play there, what can they do?

Mr. EBERLE: They can play at the museum. You know, it's our, not just our message, it's our medium as well. In the plays exhibit, for example, you can send the balls up to the roof and let them come down and watch them, anticipate their twists and turns. There's a funhouse. You can go in a room that changes your perspective.

All the things that play does. You know, we anticipate, it surprises us, we derive pleasure from it, we understand more about ourselves and to fully realize the play activity.

SIMON: Would people make a mistake to think that this museum is for children alone?

Mr. EBERLE: They would, as a matter of fact. It's not a very well kept secret that it's really an adult museum that kids love.

SIMON: The only thing that distresses me is the whole idea of studying play.

SIMON: Does that kind of take the play out of play?

Mr. EBERLE: Does it seem a little incongruous?

SIMON: I guess I would despair of someone playing and having somebody with a clipboard standing there, trying to record every move or something.

Mr. EBERLE: Well, you know, actually, play is a very serious and deep subject. You know, the neuroscientists say that it's the way our brain learns best. It does bare studying. Because play also gives us a glimpse into our psychology.

You know, you know the difference between a player and a bully just be looking at his face.

SIMON: What do you look for?

Mr. EBERLE: Psychologists look for the play face. You know, the eyebrows are arched, the mouth is open, the eyes are smiling. Even chimps have a play face. They cover their teeth because teeth are weapons.

SIMON: I never knew that.

Mr. EBERLE: I think it's even more modern than the modern sense. Because we're not really about things. What we're really about is how these things mediate play, how it helps get us to that state.

SIMON: So in the gift store, do you have a lot of different colored balls or what?

Mr. EBERLE: It's the museum gift store that's appropriate to a play museum.

Mr. EBERLE: Yeah. All the classic toys and balls, the kind you'd like. And toys that have made it into our National Toy Hall of Fame as well.

Mr. EBERLE: Well, you can get an eight ball, you can get Lincoln Logs and Lego, you know, construction toys, that adults hoped kids would learn from, and kids just learn by playing.

Mr. EBERLE: Oh, what a delight to talk to you, Scott.

And this is NPR News.