Accessibility links
The Sound of Silence At a recent Paul Simon concert, hearing-impaired fans were able to enjoy the music through the help of sign-language interpreters. Sign Language Associates sent three interpreters who had gone through Simon's songs line by line to come up with translations.

Listen
The Sound of Silence 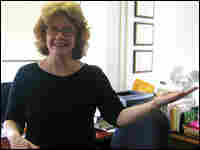 See Bailey and her colleague Kevin Dyels use sign language to "sing."

When She Doesn't Know a Song's Lyrics

Molly Hullinger lost the ability to hear speech nearly 30 years ago, but that didn't stop her from attending a recent Paul Simon concert. She loves music. Even if she can't understand the words, she can hear some of the low tones, and she can feel the beat.

She also got help from three interpreters who were on hand to sign the lyrics. The interpreters are with Sign Language Associates, a Maryland-based company that provides interpretation at a variety of events, including conferences, government hearings and theater productions.

Requests for sign-language interpreting at concerts started coming in after the Americans with Disabilities Act was passed in 1990. It required venues to provide access for people with all kinds of disabilities, including hearing loss.

Depending on the concert, there could be one deaf person in the audience, or as many as 20 or 30. In most cases, the artist ultimately covers the cost of the interpreters.

To prepare for the Paul Simon concert, Janet Bailey, president of Sign Language Associates, and two other interpreters listened to Simon's music for two weeks. Line by line, they figured out different ways to interpret his songs.

Signing music is not about word-for-word translation, Bailey said. It is about trying to convey meaning. Sign interpreters think conceptually, considering flow, rhythm and whether the signs convey visually the mood that each song tries to convey.