Accessibility links
What's in a Name? The Avocado Story In 1915, a group of California farmers reinvented the humble ahuacate. The fruit now known as avocado has a buttery, nutty flesh unlike any other and presents a mouthwatering array of serving options. 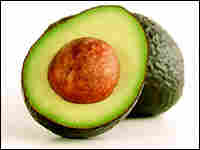 The flesh of an avocado is unlike any other fruit: buttery, not sweet, somewhat nutty and oily in flavor; firm enough to be sliced or diced, yet pliable enough to be mashed into a paste or puree. Scroll down for three avocado recipes. iStockphoto hide caption 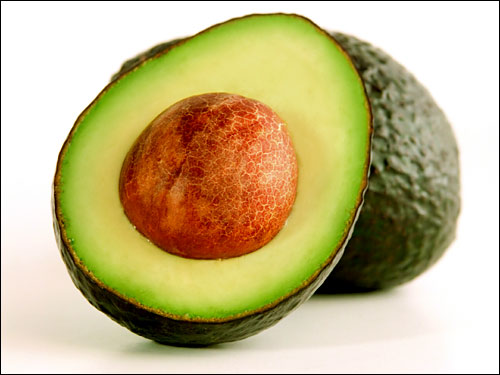 The flesh of an avocado is unlike any other fruit: buttery, not sweet, somewhat nutty and oily in flavor; firm enough to be sliced or diced, yet pliable enough to be mashed into a paste or puree. Scroll down for three avocado recipes.

Selection, Storage and Use

On May 15, 1915, in the posh new Hotel Alexandria in Los Angeles, a cadre of California farmers gathered to decide the fate of a new crop.

The ahuacate, a pebbly-skinned, pear-shaped fruit, had been a staple food in Mexico, and Central and South America since 500 B.C. In the 16th century, Spanish conquistadors fell in love with the fruit after observing its prized status among the Aztecs.

Until the early 1900s, the ahuacate had never been grown commercially in the United States. By 1914, however, hotels in Los Angeles and San Francisco were ordering as many of the fruits as they could and paying as much as $12 for a dozen.

But the farmers faced a marketing problem. First, ahuacate was too hard for Americans to pronounce. Worse, it was the Aztec word for testicle, named for its shape and reputation as an aphrodisiac. Then there was the other unappealing name: "alligator pear."

The farmers came up with a new name: avocado. They informed dictionary publishers of the change — and that the plural was spelled "avocados," not "avocadoes" — and named their own group the California Avocado Association.

The approach worked. Today, California accounts for nearly 90 percent of all avocados grown in the United States.

When the farmers first met, E.J. Wilson, a Berkeley horticulturalist, predicted little interest from the American market. "It contain[s] no sugar and fruits are supposed to be sweet — the sweeter the better," he wrote to a colleague.

The farmers knew that Wilson's concerns were unfounded. What made the ahuacate so different from other fruit was the very reason it was appealing.

Like most fruit, the avocado ripens once plucked from the tree. But its flesh is unlike any other: buttery, not sweet, somewhat nutty and oily in flavor; firm enough to be sliced or diced, yet pliable enough to be mashed into a paste or puree.

There are more than 400 varieties of avocado, but Hass has become the most popular in the United States. Named after postal worker Rudolph Hass, who purchased the seedling in 1926 from a California farmer, the distinctive purplish-black fruit has a thicker skin and smaller body than other varieties. Farmers found the Hass easier to cultivate, and its higher oil content and good nutty flavor appealed to consumers.

Avocados present a mouthwatering array of serving options. They can be sliced and served with apples, nuts and cheese. In their most popular form, guacamole, they are mashed with salt, lime, garlic and cilantro — and chiles and tomatoes, depending on the recipe. A friend feeds her infant spoonfuls of avocado straight from the skin: the perfect baby health food. Indonesians blend them into drinks with sweet condensed milk. Brazilians add it to ice cream. Californians put it in their maki rolls.

Avocados have a subtle nutty flavor — too subtle for some people to get excited about. But the beauty of avocados is not so much its flavor as its oily consistency. Avocados have become popular in restaurants and homes because, in food-science terms, they act as a "covalent bond" with other ingredients. The creaminess of the fruit converts disparate tastes into complementary ones and punches up otherwise drab ingredients. Grilled corn kernels, diced red onions and mango elbow each other for attention until chunks of avocado mediate and mellow the mix into a tasty salsa — an unstable structure turned stable. An ordinary salad of greens, tomatoes and raw veggies turns almost decadent with slices of avocado.

Another way to think of avocado's role is to consider the fat marbling in a prime steak. Marbling is what makes a steak juicy and flavorful. Avocados, with their natural fatty richness, serve a similar purpose when incorporated with other foods. Mash an avocado with a pinch of salt and a drizzle of oil, and you'll find it an ideal condiment — and flavor conduit — for nearly any meal.

The fat in an avocado gets a bad rap. While it does contain saturated fat — a little more than 1 gram per quarter-segment — the fruit is high in fiber, has more potassium than bananas and is loaded with folates and vitamin E. Of all fruits, the avocado is highest in protein. As a bonus, the natural oils of the fruit are good for your skin and provide a refreshing alternative to over-the-counter facial products.

And if all that is not enough, remember that the Aztecs thought the avocado was an aphrodisiac.

The avocado gives this popular Indonesian drink a consistency similar to egg nog.

Peel and pit avocado. Put all ingredients into blender and puree until smooth.

There are many ways to make guacamole, but my wife's version has earned consistent praise and requests for the recipe. Keep the avocado somewhat chunky and use good salt.

Split avocados, discard the pits, and empty contents into a medium bowl. Add garlic, onion and cilantro. Mash with a fork or the ball end of a large whisk until smooth but still chunky. Add lime juice, salt and pepper to taste. Serve with chips or use as a topping on grilled chicken or steak. 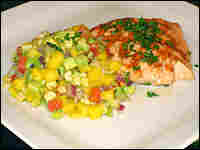 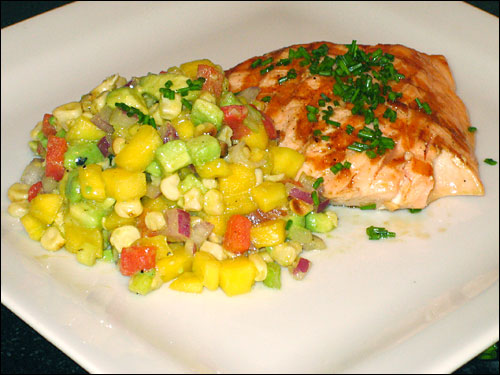 2 ears grilled corn on the cob

Hold corn upright on a cutting board and slice corn kernels off cob. Mix kernels in bowl with all remaining ingredients except avocado. Let sit in refrigerator for at least half an hour. Before serving, add diced avocado. Mix gently, adding more olive oil and salt to taste.