Accessibility links
Wielding Cuteness as a Weapon In the unlikely event that Dido were to mate with Bjork, Psapp is the likely result. "Hi" is a shimmery mix of the things the duo does best: gently insistent, vaguely Brazilian melodies layered over offbeat percussion.

Wielding Cuteness as a Weapon

Wielding Cuteness as a Weapon 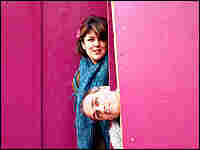 The latest and twinkliest in a line of British male-female electronic pop acts (see also: Portishead, Everything but the Girl), Psapp specializes in works of weaponized cuteness. The duo's breakthrough, the frequently great and terrifyingly bubbly The Only Thing I Ever Wanted, is a bundle of tics wrapped in warm-bath melodies wrapped in more tics: Toys and mechanical chickens are used as effects, as are kitchen utensils and a pot-bellied oud. There's a weird fascination with cats. In the unlikely event that Dido were to mate with Bjork, Psapp (the "P" is silent) is the likely result.

In spite of its unconventional moorings, The Only Thing I Ever Wanted is a pop album at heart, the sort of thing overheard at Anthropologie stores or used as TV theme music (one of the duo's older tracks, "Cosy in the Rocket," plays over the opening credits of Grey's Anatomy).

"Hi" is the disc's most easily digestible song, a shimmery mix of the things Psapp does best: gently insistent, vaguely Brazilian melodies layered over offbeat percussion. (Is that a xylophone? The chicken? Who knows?) Airy and deft, it's the album's most bewitching track, never even threatening to bend under the weight of its own whimsy.

Album
The Only Thing I Ever Wanted
Artist
Psapp