Accessibility links
Hassan Nasrallah: Mideast Man of the Minute If Sheikh Hassan Nasrallah survives the current cross-border fighting, the leader of the terrorist group Hezbollah could emerge as one of the most influential leaders in the Arab world. A brief look at his past and present actions. 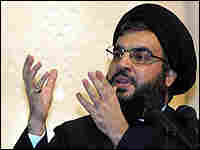 In April, he warned that his operatives would seek to abduct Israeli soldiers. And on July 12, his warning was realized. Hezbollah operatives, under the guidance of Sheikh Hassan Nasrallah, staged a deadly, cross-border raid into Israel that left eight Israeli soldiers dead and two abducted. If he survives the current cross-border fighting, Nasrallah, leader of the terrorist group Hezbollah, could emerge as one of the most influential leaders in the Arab world. Here's a brief look at his past and present actions.

Early Years: A grocer's son, Nasrallah was born in south Beirut in 1960. In his youth, his commitment to study and his charisma caught the attention of influential Shiite clerics in northern Lebanon. By the age of 16, he was sent to study theology at the Shia seminary in Najaf, Iraq -- one of the spiritual centers of Shiite Islam.

But in 1978, the often anti-Shiite Iraqi regime expelled Nasrallah and hundreds of radical Lebanese Shiite clerics. Over the next four years, he became increasingly involved with the radical Shiite Amal movement in Lebanon. At the time, Lebanon was in the midst of its 15-year civil war. Nasrallah and other prominent, young Shiite radicals soon came to believe that Amal was becoming too secular. When Israel invaded Lebanon in 1982 -- part of an effort to crush the Palestinian Liberation Organization -- Nasrallah broke away from Amal and joined the newly-established Hezbollah -- or Party of God. Nasrallah was regarded as a strong, charismatic orator and a good organizer.

What He's Like: "Softspoken" and "extremely serious," according to those who know him. "He speaks like a military commander," says Adam Shatz, who wrote a series on Hezbollah for the New York Review of Books. But as a public orator, his rhetoric is often lofty, and even somewhat hyperbolic. Though he is an Islamist, his focus is often on pan-Arab themes harking back to the 1960s and '70s, when leaders spoke of "driving Israel into the sea."

Current Position: He's been the secretary-general of Hezbollah since 1992, after Israel assassinated his predecessor, Sayyad Abbas Musawi. The group is widely believed to be one of the best-trained and funded militant organizations in the Middle East. Nasrallah is also a key figure in Lebanese politics.

His movement is a political party represented by a deputy in the Lebanese cabinet and several members in Parliament; it has established a wide social network in south Lebanon providing funds for schools, hospitals and food pantries. Largely for these reasons, Nasrallah has managed to form a strong base of support among poor Shiites in Lebanon.

But as Hezbollah has further solidified its relationship with Iran and Syria, the group has become more powerful. Iranian military officers have helped train Hezbollah operatives to carry out attacks against Israel. Throughout the Arab world, Nasrallah is seen as a hero -- a leader capable of inflicting pain on Israel.

Role in the Crisis: Nasrallah is one of the main engines driving the latest fighting. He understands the importance of propaganda and opposes any normalization of relations with Israel. But Nasrallah also believes that Israel understands the use of force and he's had success, in the past, forcing Israel's hand when it comes to negotiations over prisoner exchanges. In 2004, Israel released hundreds of Palestinian prisoners in return for an abducted Israeli businessman and the bodies of three Israeli soldiers. But there may be other motivations behind this latest round of attacks. One theory is that Iran wanted Hezbollah to divert international attention from Iran's nuclear program.

Hezbollah's Track Record: The organization has been implicated in a series of terror attacks, including the 1983 bombing of U.S. Marine barracks in Beirut that left 240 dead, and is widely believed responsible for the 1992 attack on the Israeli embassy in Buenos Aires and the 1994 bombing of a Jewish cultural center in the city.

Hezbollah also pursued a low-intensity war against Israeli forces occupying south Lebanon. In 1993, a year after Nasrallah took the helm of Hezbollah, his operatives killed 26 Israeli soldiers, who at the time, were part of a security contingent occupying a part of southern Lebanon. The mounting Israeli casualties in southern Lebanon are widely seen as the reason Israel eventually withdrew its army from the area in 2000. For Hezbollah, the withdrawal was regarded as a victory. 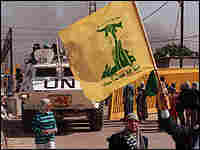