Accessibility links
Gene Test Promises to Find Right Drug, Right Dose The wrong prescription and dose can mean ineffective drugs and harmful side effects. A new test, part of the growing science of pharmacogenetics, is designed to help doctors figure out which drugs and doses are right for their patients. 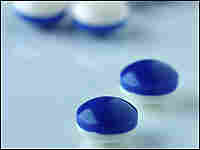 Is This the Right Drug for Me?

Doc, what can you tell me about pharmacogenetics?

If you pose that question to your physician, you want to find out whether a medication you're taking (or are about to take) is the right dose (and the right drug) for your body. Pharmacogenetics is the science of using genetic tests to fine-tune prescriptions. But it's so new, your doctor might not be aware of it.

Tests are available, or soon to be available, for a number of medical conditions. Here are some online resources that might help you (and your doctor):

Colon Cancer: Mayo Medical Laboratories offers a test to assess the risk for side effects from irinotecan hydrochloride (or Camptosar), used in the standard treatment for advanced colon and rectal cancer.

Depression: Mayo Medical Laboratories also has a test that can help identify patients at risk for side effects from drugs prescribed for depression.

For additional information on pharmacogenetics, visit the National Institutes of Health site. Or read this explainer at the Food and Drug Administration's site.

Finding the right drug and the right dose is part of the art of medicine. A genetic test designed to help doctors determine just that is being sold by The Mayo Clinic, it announced this week. The test is part of a new science called pharmacogenetics.

A few years ago, doctors were having trouble finding the right drug for Marla Flood's son Jacob. Jacob has autism and a long history of biting, hitting, kicking and scratching, his mother says.

"We had probably tried every drug there is for the treatment of his aggressiveness, his obsessive-type behaviors," Flood says. "He always had a negative reaction, either an increase in aggression or just some side effects that were very harmful to him."

Jacob’s doctor, autism expert Patty Manning-Courtney at Cincinnati Children's Hospital and Medical Center, says it's not that uncommon in children.

"Occasionally there are patients who didn't respond or were, in fact, worse on meds," Manning-Courtney says. "In children with autism, it's a lot of trial-and error-practice with medicines."

Jacob was given Risperdal, a powerful antipsychotic drug that helps many children with autism and behavior problems. But it didn’t help Jacob, his mother says.

"Jake started having tremors; he would just shake all over, unable to focus," Flood says. "I would give him his medication; he would sit on my lap and just be a zombie. That's the only way I can describe what he looked like."

Jacob's hospital is a pioneer in the new field of pharmacogenetic testing. It offers tests for two genes that produce enzymes that break down drugs. These genes control how the body metabolizes 25 percent of all drugs, including some used for autism.

Dr. Manning ordered the tests for Jacob. Results showed that he is part of a small minority that metabolizes drugs differently.

A normal dose of Risperdal was actually an overdose for Jacob. So Marla Flood agreed to start her son back on the drug -- at an extra-low dose.

"Now he's not near as aggressive as he has been," Flood says. "I don't have bruises on me now."

The promise of pharmacogenetic testing is that people get the right dose of the right drug. Sometimes the tests show that a drug doesn't work. For example, codeine, a pain reliever, cannot be broken down by seven percent of whites and two percent of blacks. These people get the side effects and none of the pain relief.

Commercial tests are available, but only one is approved by the Food and Drug Administration. It costs about $300. Some university hospitals do their own testing, and the Mayo Clinic offers some tests nationally.

Pharmacogenetics pioneer David Flockhart of Indiana University says the question is who should be tested and when. Eventually, people may be tested at birth, he says.

The FDA already recommends that doctors consider a gene test before prescribing the breast cancer drug Herceptin and the attention-deficit and hyperactivity drug Strattera.

But Flockhart says it will take more research before doctors embrace the tests. So what should patients currently taking drugs do if the drug doesn’t seem to be working, or if it is creating bad side effects?

Flockhart says patients are their own best advocates and should consult a physician.

Other experts, including Russ Altman of Stanford University, say pharmacogenetics is such a new science that most doctors didn't learn about it in medical school. Clinicians have to find a laboratory that offers the test and learn how to read the results, he says.