Accessibility links
For Toddlers, a World Laden with Advertising For many weary parents of preschoolers, television can be a godsend. And some of the programming might even be educational. But some experts say that even the most positive children's television can carry messages that aren't good for children.

Listen
For Toddlers, a World Laden with Advertising 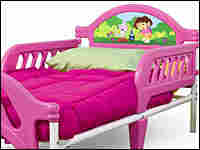 An informal survey of Dora the Explorer products, from popsicles to the bed shown here, turned up more than 150 items and a price total of more than $3,000. But Dora is not the only show with extensive merchandising. NickJr.com hide caption 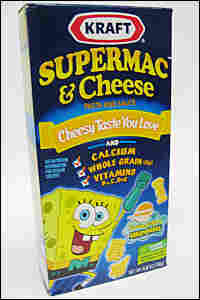 Scroll down to read an excerpt from Susan Linn's Consuming Kids, a highly critical look at corporate marketing strategies toward young people.

For many weary parents of preschoolers, television can be a godsend. And some of the programming might even be educational. But some experts say even the most positive children's television can carry messages that aren't good for children.

Angelica Flores has observed that her 4-year-old daughter, Araceli, wants anything that has her favorite character, Cinderella, on it. With her 7-year-old son Tomas chiming in to ask for items such as SpongeBob SquarePants Macaroni and Cheese, Flores says trips to the grocery store have become more challenging.

Flores' friend, Julie Courtney, often digitally records her 4-year-old's shows so she can skip the commercials. Nonetheless, she's noticed that her daughter still recognizes the logos for Coca-Cola.

Research by Vicky Rideout of the Kaiser Family Foundation has shown that many parents of preschool-age children have an uneasy awareness of the impact of commercials on their kids. "One mom mentioned to me [that] her daughter, who couldn't even talk yet, was humming the McDonald's jingle every time she saw the Golden Arches," Rideout says.

But Rideout's research says that discomfort does not translate into real concern for parents. In fact, most parents see appropriate programming as a godsend. About one-third of children age 6 and younger even have a television in their room, just so they can watch their shows while parents are occupied elsewhere.

Cyma Zarghami, the president of Nickelodeon, says her own company's research confirms that parents aren't worried about television. They focus on issues such as safety, making family life manageable and living within a budget. Zaraghami says some parents do complain that food ads aimed at kids have turned grocery shopping into a challenge. Nickelodeon tries to address that by promoting some healthy products, such as Dora the Explorer carrots.

But ultimately, Zarghami acknowledges, Nickelodeon believes that by putting characters on products, they are serving their real customers: kids.

"We don't ever want to say that we didn't do stuff that kids wanted or loved... within the parameters of being responsible and age-appropriate," Zarghami says.

Mayo Clinic pediatrician Dan Broughton says that parents should be concerned about the impact the media is having on their kids. Broughton speaks for the American Academy of Pediatrics on this issue, and says parents tend to worry too much about statistically remote dangers such as child abduction or cancer.

According to the American Academy of Pediatrics, children younger than 2 years old should never be in front of a television, even watching made-for-baby videos. Toddlers should spend no more than two hours a day with the television on, and should be restricted to quality children's programming.

Vicky Rideout says about one-third of young children live in homes where parents leave the television on almost all the time, regardless of whether anyone is watching.

"They think that, leaving the TV on in the background, the kids are mostly ignoring it," Rideout says.

But Broughton says that children take in a lot, even if they are only occasionally exposed to programming intended for general audiences. A colleague recently told him about a father whose 4-year-old son raised the topic of Levitra while on a doctor's visit for an earache. He notes that children are attentive to messages that aren't necessarily intended for them, and that they may not be equipped to process the information, even with ads on age-appropriate programs.

"It's sad that just about every media experience for children today is designed to sell them something," says Harvard psychologist Susan Linn, co-founder of the Campaign for a Commercial-Free Childhood. Linn believes that parents don't realize that they're succumbing to a sophisticated, multibillion-dollar advertising industry.

The only way to combat that, Linn says, is through activism against advertising aimed at young kids. But she acknowledges that many parents don't support her position, even though it is restricted only to junk food. And according to Kaiser Family Foundation research, while half of parents say their young children are greatly influenced by food advertising on television, 56 percent oppose policies restricting junk-food ads.