Accessibility links
'Clerks II' Takes Smith Back to the Beginning Writer-director Kevin Smith returns with a sequel to the indie flick Clerks, the movie that put him on the map. Clerks II once again brings Dante, Randall, and even Jay and Silent Bob, to the big screen. Steve Inskeep talks with Smith about his characters and his career.

Listen
'Clerks II' Takes Smith Back to the Beginning

Writer-director Kevin Smith returns with a sequel to the indie flick Clerks, the movie that put him on the map. Clerks II once again brings Dante, Randall, and even Jay and Silent Bob, to the big screen. Steve Inskeep talks with Smith about his characters and his career. 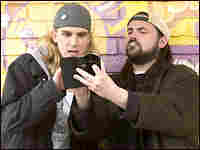 It's been 12 years since a filmmaker created a cult classic out of two guys working at a convenience store.

Mr. JEFF ANDERSON (Actor): (as Randal) Everybody that comes in here is way too uptight. This job'd be great if it wasn't for the (censored) customers.

Mr. ANDERSON: (as Randal) Liar. Tell me there aren't customers that annoy the (censored) out of you on a daily basis.

MONTAGNE: The movie was Clerks. The main character was named Dante, and the movie tracked his life through one hellish, endless day. He got stuck at work and pelted with cigarettes and discovered a dead man in the bathroom.

Kevin Smith made that low-budget film inside Quickstop, a New Jersey store where he'd actually been employed. His characters provided misdirection to a generation of 20-somethings. And now that they're in their 30's, they're back.

Steve Inskeep spoke to their creator.

Kevin Smith no longer works for the minimum wage. He lives in a Hollywood house that he bought from his friend Ben Affleck, who also starred in Smith's last movie, Jersey Girl, which bombed.

Mr. KEVIN SMITH (Filmmaker): Next movie up, I don't want to work with famous people.

INSKEEP: Instead, Smith turned back to his first movie and to his past. He made a sequel, Clerks II - another long day of profanity, toenail painting, a scene with a donkey that is sure to offend some moviegoers, and the absolute minimum of work.

Mr. SMITH: For years, I was a convenience store-type guy. So basically, I'd be there by myself. It's all-you-can-eat kind of food affair. You know, it's usually in a very small town so, of course, you become very familiar and friendly with all the locals. And since it's a Mom-and-Pop joint, you don't get that high traffic of, like, a 7-Eleven. So I could bring in a TV and a VCR, kick back, and watch movies.

INSKEEP: Do you still stop into a convenience store, and, say, you know, you mind if I take a turn at the cash register there?

Mr. SMITH: You know, I opened up two of my own retail outlets. I've got, like, two comic book stores - one in Red Bank, New Jersey, one out in Los Angeles. And so I can take a turn behind those registers and...

Mr. SMITH: Comic book stores. And the awesome thing is, like, I can just take money out of the register this time around as well. But at the Quick Stop…

Mr. SMITH: Yeah, there were times. There were some convenience stores, not so much Quickstop, where I was a bit of a till-tapper back in the days.

Mr. SMITH: But I go back to Quickstop periodically, and - obviously, when we go back to shoot something.

INSKEEP: Was this your idea, or did somebody come to you and say, look, if you can make a cheap Clerks II, we'll make money no matter how bad it is.

Mr. SMITH: No, this was me, and I actually had to convince folks to come along for the ride. Like, it was weird having to convince Harvey Weinstein, like, dude, a Clerks sequel. And he was like, eeeh, I don't know. And I handed him the script, and he was really not convinced.

Mr. SMITH: It was just like, it's just two guys sitting around talking the whole time. I said, well, dude, that's what the first movie was. And he was, like, really? I didn't remember. All right, go ahead.

Jeff Anderson and Brian O'Halloran, the guys that play Randal and Dante - I thought I would tell them and they'd be over the moon about it. And Jeff Anderson was the toughest to convince, you know, because he was just like, dude, for whatever reason, people seemed to like that first movie. And, you know, why would you want to mess with that? You make a sequel, if it sucks, you run the risk of potentially having people retroactively hate on the original. He was like just leave well enough alone.

INSKEEP: Now, in Clerks II, several of the same characters have moved on to a fast-food joint - moving up sideways in the world - something. And I want to play a clip from this. This is a character who is deeply religious and also deeply fond of the cartoon characters the Transformers, and he's getting razzed about it.

Unidentified Man #2: (In movie clip) Oh, no they didn't. They were more than meets the eye.

Unidentified Man #1: (In movie clip) I thought you weren't even allowed to watch a lot of TV in your house because you're all Christian.

Unidentified Man #2: (In movie clip) Well, as it turns out, cars and trucks that turn into robots aren't really that blasphemous because my pastor says that machines can turn into other machines and it's not a slight against God.

Unidentified Man #1: (In movie clip) Transformers were a total slight against God, as much as God sent His only begotten son to die on the cross to redeem mankind, and all we did to pay Him back was make terrible cartoons like the Transformers.

INSKEEP: Kevin Smith, I wanted to play that clip because it seems to reflect two things that concern you over and over again in your filmmaking.

Mr. SMITH: Yeah, I'm a big fan of both, actually. You know, I was kind of raised Catholic, and so - you know, one day I kind of decided that maybe Catholicism was a bit too strict for my tastes, and that since I wasn't following all the rules of the club maybe I didn't belong in the club. But I still maintain a pretty strong tie to Christianity. I'm a pretty spiritual cat. I'm a pray-er, sir.

Mr. SMITH: I'm particularly praying pretty hardcore in advance of the opening of Clerks II, as you might imagine.

Mr. SMITH: That's when I busted out the actual rosary beads.

INSKEEP: Was it weird at your age, not that you're so old, but you're in your 30's now…

INSKEEP: ...to return to this world of slackers in their 20's? Although these guys are getting a little old for that world, but still...

Mr. SMITH: I don't know that I've ever really left it, you know. I mean, from Clerks to Mallrats to Chasing Amy to Dogma, Jay and Silent Bob Strike Back - they're films that are all kind of centered on the shiftless, lay-abouts. You know, Jersey Girl wasn't, and look what happened there.

So, you know, talking about people that are kind of not very ambitious is something that I dig on, because that's the world I came from. Most of the people I still know aren't very ambitious.

INSKEEP: I'm just thinking, if there were a Clerks III ten years from now and these same guys are 45 now and working in a dumpy place, I'd just feel kind of sad.

Mr. SMITH: Yeah, but why? Why would that make you sad? Have you ever been in a convenience store where, like, somebody upwards of 40 is manning the register?

Mr. SMITH: I see that all the time. That doesn't make me sad. Somebody's gotta sell me the milk, dude. Somebody's gotta flip the burgers. There's no crime in being old and having a job that, you know, isn't as glamorous as film or radio or something like that. Not everyone shoots for the stars, man. Some people just kind of want to scrape by.

My old man went to work at the post office when he got married and had a kid. And, you know, he worked there for what, 20 years or something like that? And not as a postman or as a letter carrier, nothing as glamorous as all that. He was the guy who worked at the sectional center who cancelled your stamp - soul-killing work like that from eleven o'clock at night till seven in the morning shift. And we were always very proud of him, because he was one of the only guys come out of the post office that never shot anybody, but at the same time...

Mr. SMITH: ...at the same time, this was a guy who, he didn't really aspire to more. He just wanted to like, make a living to pay for his family, support his family. Like, the aspiration he had was to have the family, and the job was just a necessary evil. And I think there are lot of people out there who are like that. You know, the American dream isn't always just like you can get as much as possible for as little as possible. Some people are just happy to kind of scrape by if it affords them, you know, the lifestyle that they're looking for.

INSKEEP: Well, Kevin Smith, thanks very much for speaking with us.

Mr. SMITH: Thank you for having me, sir.

INSKEEP: Kevin Smith is the director of the movie Clerks and its sequel Clerks II, which opens Friday.

This is MORNING EDITION from NPR News. Sitting in for Steve Inskeep, I'm John Ydstie.