Accessibility links
Reporters Give Unique Peek Of White House White House pool reports have offered a revelatory, often hilarious glimpse into the private workings of the administration for years. NPR's White House correspondent, Don Gonyea, talks with other reporters about their time in the pool and the journalistic issues involved. 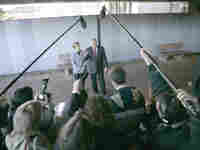 President Bush and Laura Bush at a press conference in 2004. For many White House events, only a select pool of reporters are allowed to attend. They report back to their colleagues. Eric Draper/The White House hide caption 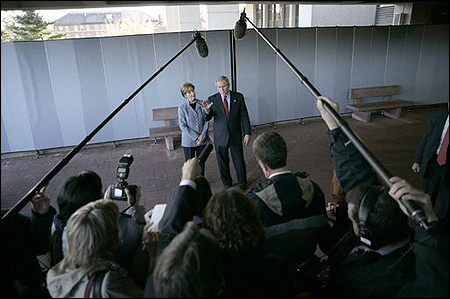 President Bush and Laura Bush at a press conference in 2004. For many White House events, only a select pool of reporters are allowed to attend. They report back to their colleagues.

Scroll down to read some of Ken Herman's pool reports. 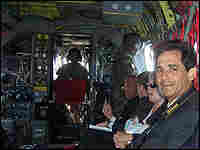 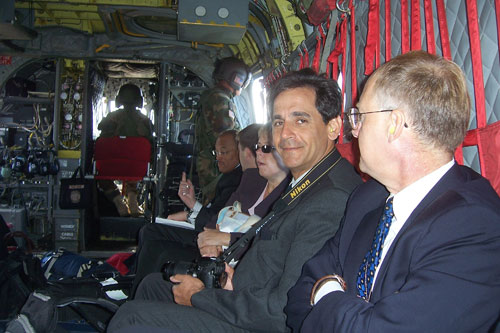 Cox Newspapers' Ken Herman on pool duty in a chopper. 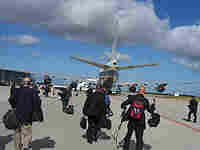 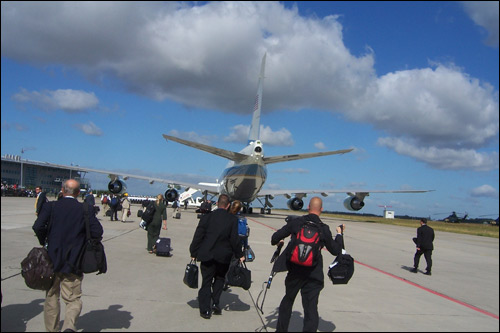 If you've ever wondered what reporters do on a slow news day, you should read White House pool reports.

Because many presidential events aren't open to the entire White House press corps, a pool of reporters from each medium -- print, radio and television -- is assembled to report back to their colleagues about what took place.

The dispatches are revelatory and often hilarious, colored with off-the-cuff observations. They give a unique glimpse of political life behind the curtain of pomp and circumstance.

Whether cheekily describing the caviar in the pool hold or the president's ceremonial first pitch, the reports are sure to entertain.

But the nature of the pool report is changing. Now, pool reports are finding their way to blogs and are circulating to the public via e-mail.

Traditionally written for an audience of insiders, the dissemination of the reports to the wider public raises journalistic questions for reporters.

Ken Herman of Cox Newspapers and Julie Mason of The Houston Chronicle talk about their experiences as pool reporters and how they approach the task of writing a report.

In our daily reminder of just how funny life can be, a Texan who eventually profited from the demise of Washington’s old baseball team tossed the ceremonial first pitch Thursday night for Washington’s new baseball team.

Bush arrived at the stadium at 6:08 p.m. after an uneventful motorcade from White House. Upon arrival, Bush went to each locker rooms to chat with the teams. Pool was in place along third-base line at the time.

Bush, wearing a red Nationals’ warm-up jacket, strode to the mound from the third-base side and got a strong ovation (amid a smattering of drowned-out boos) from a crowd so enthusiastic that it also had given Javier Castro, the Nats’ assistant clubhouse manager, a strong ovation.

We are told that the president warmed up at the stadium, out of sight, with catcher Schneider prior to the ceremony.

Bush, a right-winged hurler, is 2-0 in presidential elections. One of the wins was unsuccessfully appealed. It was his fourth appearance as presidential first-pitch thrower, previously having performed the honor at home openers in Milwaukee in 2001 and St. Louis in 2004, and at Yankee Stadium on Oct. 30, 2001 at Game Three of the Yanks-Diamondbacks World Series.

The ball used for the first pitch at the Nats’ home opener was handed to Bush by former Washington Senators hurler Joe Grzenda (14-13 with a 4.00 ERA during an eight-year Major League career that ended with the St. Louis Cardinals in 1972). Grzenda, among MLB’s all-time leaders in consonant-to-vowel ratio, played with six teams in his eight MLB seasons, an impressive number in the pre-free agency days.

(Caution: Your spellcheck might attempt to change Grzenda to Grenada, grazing, greasing or grossness.)

The ball was the same one Grzenda used to throw the last pitch at RFK Stadium on Sept. 30, 1971 at the last game of the Washington Senators before the team moved to Arlington, Texas. The Senators, who led 7-5 at the time, had to forfeit that game to the New York Yankees when fans interrupted play.

Several ownership changes after the Senators became the Texas Rangers (see chronology below), Bush became the team’s managing general partner. He enjoyed a nice profit, about $15 million (“more money than I ever dreamed possible,” he wrote in his 1999 book “A Charge to Keep”) when his group sold the team in 1998.

At the time, Bush was living in government housing in Austin while temporarily employed as a governor, a job he quit in 2000 to take another government post.

The new Nationals were a foreign-based entity (known as the Montreal Expos) until taken over by American interests, sent briefly to a Caribbean island (where they played “home” games in Puerto Rico) before being transferred to Washington.

Lawdy, lawdy, lawdy Mr. President -- Priscilla Presley, bit of a first lady in her own right, waited with daughter Lisa Marie on the front steps of Graceland as the presidential motorcade wound its way to the door. They didn't really look over at the pre-positioned pool, try as we might to make meaningful eye contact.

The mother wore a cream-colored pantsuit and had reddish hair, the daughter was in a brown skirted suit, with blonde and brown streaks in her hair. They whispered to each other and watched the cars pull up.

The motorcade pulled in without with usual screaming sirens, given the dignity of the ocassion. Bush and Koizumi got out of the car but seemed paralyzed by a winsome kind of shyness. It was Mrs. Bush who bounded up the steps with a friendly, "How're y'all?" Handshakes all around and oops -- the first ladies must have forgot to coordinate because Mrs. Bush was in a cream-colored pantsuit, as well.

Still and all, they posed gamely for a group photo on the steps. Bush was chatting with Lisa Marie. Just writing that seems totally weird. The two leaders were in shirtsleeves and casual slacks. Bush seemed pretty cheery.

Coming up behind the lead cars were the entourage, not unlike the King's own. Josh Bolten, also a rock star of sorts, wandered up the steps in his shades. Karl Rove, the "other" Elvis, seemed excited and moved around a lot. A sprawling motorcade pool came dashing up the driveway, clearing the way for this pool to head to the gift shop.