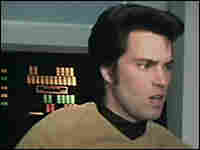 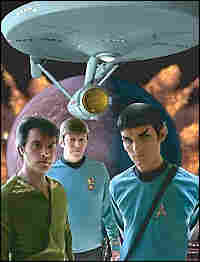 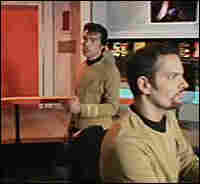 The authenticity of the USS Enterprise set is critical to the volunteer filmmakers. Retro Film Studios, Inc. hide caption 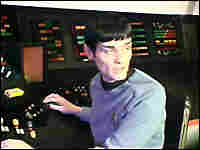 In a tiny town in rural upstate New York, sci-fi fans are correcting what they see as one of the great blunders in television -- NBC's decision to cancel the original Star Trek series.

On a sweltering Saturday afternoon in Port Henry, N.Y., James Cawley works on what looks like a Hollywood set. His life-sized replica of the USS Enterprise bridge sits in what used to be a used car dealership on the outskirts of town.

The attention to detail is remarkable, part studio set and part shrine. "We've matched everything just the way it was," says Cawley, who grew up near the set. "We found an original 1964 office chair that was the basis of Capt. Kirk's chair."

Cawley's goal is to finish the series' original five-year voyage, which was derailed not by Klingons but by network executives. CBS and Paramount, which now own the franchise, granted Cawley and crew to make new episodes for distribution on the Internet. The caveat: Cawley is not allowed to make any money from the project.

"My day job as [an Elvis impersonator] has paid for ninety percent of this," says Cawley.

Cawley and his crew of volunteers have gotten so good at making episodes -- they've finished three so far -- that they've started luring Trek icons to Port Henry.

Walter Koenig, who played Chekov in the original series, has visited Port Henry twice. He was drawn to participate in the project by the quality of filmmaking and by new story lines that allow his character to step into the spotlight.

"For the first time, we discovered who Chekov was, that he had an inner life, and that he was a character who could evolve. He wasn't simply an expository character saying 'Warp factor four!'" says Koenig.

This summer, two volunteer Trek films are in production in Port Henry -- one directed by Tim Russ, the Hollywood actor who played Tuvok the Vulcan on Star Trek: Voyager.

Cawley says these productions are as good as plenty of the sci-fi series shown on cable TV. He says they have tallied 30 million downloads worldwide, and even had their episodes translated into Spanish.

Cawley's dream is that the owners of the Trek franchise will buy in someday and agree to let him earn a living playing Kirk full-time.

"I'm just hoping that CBS will embrace the whole fan-film movement…We'd love for them to license the project, so to speak, and give us a small percentage. I mean, this is found money for them. Even at a dollar a download, that's a lot of money for somebody to say, gee, we don't want it," says Cawley.

For now, all the Star Trek: New Voyages episodes from Port Henry are available online, free of charge.