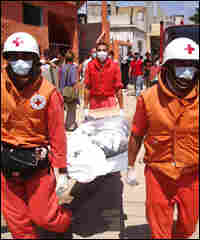 Workers from the Lebanese Red Cross deliver the bodies of a woman and child, victims of Israeli attacks. Ivan Watson, NPR hide caption 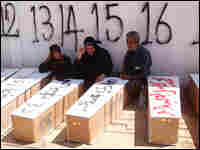 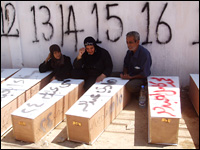 A grieving family sits next to the coffins of several dead children.

Carpenters and volunteers were hard at work in the courtyard of Tyre’s state hospital today, busily constructing dozens of coffins for a mass burial for more than 80 Lebanese civilians who were killed in the 10-day-old Israeli bombing campaign.

Nearby, two trucks stood parked. For days, their motors have been running around the clock. They are refrigerator trucks, and since the hospital mortuary overflowed at the start of the Israeli bombing campaign, they have been used to store a growing cargo of corpses.

The hospital's director, Dr. Salman Zeynadin, says many of the victims died from serious burns, the results of Israeli air and artillery strikes in the villages and countryside around Tyre. With the situation still too dangerous to hold proper burials, Dr. Zeynadin ordered the temporary burial of the bodies in a mass grave.

Doctors in Tyre say since the fighting began, the city's hospitals have received more then 300 wounded and 102 dead.

Israeli jets have repeatedly bombed the road network in southern Lebanon. The road to Tyre snakes past demolished bridges and bombed gas stations. Cars have to skirt around huge craters in the road.

The town of Tyre itself is almost completely deserted. In the ancient port, several men sat next to idle fishing boats. George Atiya, a 48-year old carpenter, said his friends and neighbors have been receiving automated phone calls from the Israeli military, with warnings recorded in Arabic instructing them to evacuate all of Southern Lebanon.

Across town today, bulldozers dug two long trenches in an abandoned field. And in the afternoon, Lebanese army trucks loaded with coffins, backed into the pits.

One by one, soldiers dragged the boxes out and laid them on the ground. As they worked, Israeli warplanes began bombing a ridge just a few miles away.

Just before bulldozers finally filled in the pits, workers rushed in to add another coffin. It contained the body of a Lebanese woman killed in an Israeli air strike today. She was buried along with 81 others.

Day after day, Red Cross worker Sam Zheir has been bringing dead and wounded people in from the countryside. All of them, he said, were civilians. Many were buried today.

As the Israeli military bombs southern Lebanon, aircraft periodically drop leaflets over the countryside, instructing people in Arabic to evacuate the area and move north, for their own safety.

But leaving is dangerous. Two days ago, Zheir says he found a car full of fleeing civilians, which had been hit by an Israeli bomb.