Accessibility links
Jellyfish Take Over an Over-Fished Area Critics of the fishing industry have long predicted that if over-fishing continues for much longer, "junk species" like jellyfish will start filling up the vacancies. Until recently, there was no evidence that the prediction would come true. But now, scientists report the largest jellyfish invasion ever, off southern Africa. 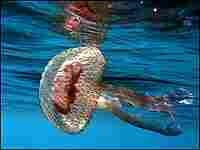 A medusa floats in the sea near the Adriatic town of Split, Croatia. Medusae are one of the species of jellyfish responsible for the bloom on the Namibian coast. Matko Biljak/Reuters/Corbis hide caption 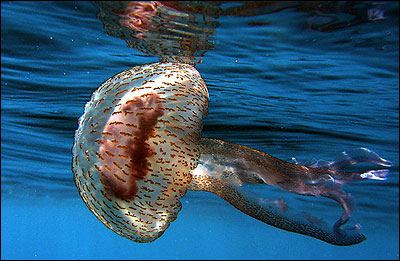 A medusa floats in the sea near the Adriatic town of Split, Croatia. Medusae are one of the species of jellyfish responsible for the bloom on the Namibian coast.

Critics of the fishing industry have long predicted that if over-fishing continues for much longer, "junk species" like jellyfish will start filling up the vacancies.

Until recently, there was no evidence that the prediction would come true. But along the coast of Southern Africa, famously productive fisheries have crashed in recent years. In a new paper, English scientists say the spot on the food chain long occupied by these fish has now been filled by the largest jellyfish boom ever measured.

These jellyfish are said to be so dense that they cause trawling nets to burst at the seams.

Q&A: What's Good About a Jelly? 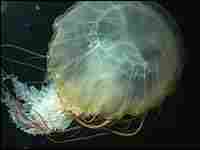 Sea nettles, a type of jelly, have been growing unchecked in Namibia's waters. Critics of the global fishing industry say that overfishing has damaged the ecosystem there, causing the bloom. Kevin Schafer/Corbis hide caption 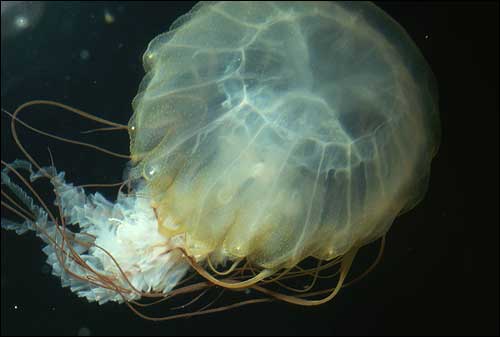 Sea nettles, a type of jelly, have been growing unchecked in Namibia's waters. Critics of the global fishing industry say that overfishing has damaged the ecosystem there, causing the bloom.

The average person doesn't think about jellyfish too much -- only when stung. But there may be another reason to be wary of the creatures: their blooms. That's when jellyfish reproduce in mass numbers in a small area.

The problem is blooms may be happening more frequently, and as in Namibia, they're lasting for far too long. On such a large scale, jellies can smother an area, eating up all the fish eggs and ripping fishing nets with their sheer number.

Chad Widmer, senior aquarist at the Monterrey Bay Aquarium in California, has been studying jellyfish for the past decade. He and others are working to find out more about their blooms. He spoke with NPR about the pervasive creatures, and how, in normal conditions, jellies are good.

Q: How many species of jellyfish are there?

A lot. If I were to ballpark, I'd say maybe 30,000 different species, but we're discovering new kinds all the time.

What size are they?

They can be very, very tiny, down to less than a millimeter tall and a millimeter wide, and the largest can be three or four feet in diameter. There are animals called siphonophores, like the Portugese man o' war, which are a lot like jellies, but are a colony of organisms rather than a single jellyfish. These can be very long. There's one in Monterey Bay that can get to be 130 feet long.

Where are jellyfish found?

All over the world. Pretty much everywhere you look in the ocean, you can find jellies.

It seems like jellies get a bad rap. How'd they earn that reputation?

They sting swimmers at beaches. They'll wash up dead on shore and people, not knowing what they are, pick them up to play with them and get stung. Also, anytime you get a non-native species from one body of water and transplant it to another, you can cause all kinds of trouble. Oil tankers and ocean liners do that with jellies all the time.

Why do jellyfish sting?

For the most part, 95 percent are just going to sting. Some jellies are actually able to choose whether to sting their prey. How they do that, we don't know. As for the stingers, they're like kids' jack-in-the-boxes -- there's a box, and a cap, and a happy little puppet guy that jumps out.

Stinger cells are arranged very much like that. There's a box, a trigger, and a trap door. When you hit the trigger, the trap door pops open, but instead of a happy puppet guy, there's a hollow, harpoon-like, spring-loaded dart full of neurotoxins. They make it so the muscles stop working so that the prey doesn't struggle. If you're a gelatinous animal, you don't want to struggle with your prey. You want that thing to stop moving.

Do jellyfish do anything good for the ecosystem?

Sure. In the ecosystem, they play an important role. They're eaten by a lot of things. Some animals ride around on jellyfish. There are juvenile fish that use jellies as homes. They hide in tentacles and don't get stung, but are protected from predators. Just by the nature of being in the ecosystem, they eat a lot of things, and how that affects everything is really unknown at this point.

Of the thousands of species of jellyfish, how many are known for blooming?

Lots of them. Environmental cues, like changes in water temperature or salinity, tell the polyps -- the part of a life cycle of the jelly where it will asexually reproduce and make copies of itself -- to turn on jellyfish production mode. The thing that really makes it impossible for those of us studying jelly-bloom ecology is that nobody knows where the polyps live in nature. That's the holy grail of jellyfish ecology: Until you know where the polyps live in nature, you can't get at the real question of jelly-bloom ecology.

Besides the bloom in Namibia, have there been other blooms associated with overfishing?

Japan just went through a huge bloom. They've got like these 300-pound jellies killing fish and tearing holes in the nets. We get blooms in Monterey Bay, although in three years, we haven't seen any.

The severity of the sting has to do with the potency of the neurotoxin and how big the spring-loaded dart is. Most jellies you come across actually have stingers too small to get through a human's thick skin.

If you do get stung, I would treat it first by removing any tentacles that are still around the affected area, then use running water. Basically, you're trying to remove any stingers that haven't stung you yet. Then put vinegar on there. If you have mustard, you can use that. After that, I like to use a topical antihistamine cream.

Once you've been stung, little red welts will arise and they will itch three or four hours later. The cream keeps you from itching. There are some "jellyfish sting" suntan lotions out there and bottom line is, they don't work.

If you don't have vinegar, urine will work in a pinch … But I haven't tried it.

Chad Widmer is senior aquarist at the Monterey Bay Aquarium, where he researches jellyfish and manages their display and acquisition.

"Jellies: Living Art" at the Monterey Bay Aquarium
A Consumer's Guide to Sustainable Seafood
How Pervasive is "Fishing Down Marine Food Webs?"