Accessibility links
Os Mutantes (Finally) Make American Debut This week, the pioneering Brazilian band Os Mutantes will perform in this country for the first time. The group came to prominence in 1968, as part of the Tropicalia movement that polarized Brazil. The band got back together earlier this year, performing for the first time since 1978. Critic Tom Moon is among the faithful who's been waiting for this reunion.

This week, the pioneering Brazilian band Os Mutantes will perform in this country for the first time. The group came to prominence in 1968, as part of the Tropicalia movement that polarized Brazil. The band got back together earlier this year, performing for the first time since 1978. Critic Tom Moon is among the faithful who's been waiting for this reunion. 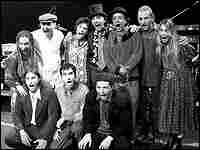 The Brazilian band Os Mutantes has collected some big name fans. Beck and David Byrne are among those who have said they've been influenced by the group. Well tonight Os Mutantes plays for the first time in this country. They have a show in New York. The psychedelic rock group came to prominence in 1968 as part of the socially active Tropicalia Movement in Brazil. They broke up 10 years later.

But they're back together now and our critic Tom Moon has been waiting for the reunion.

To a certain sliver of the music universe, the return of Os Mutantes is an event. Decades before hip-hop-style cut and paste became the norm, this band was smashing together elements of samba and psychedelic rock into totally delightful collage. It was a revolutionary sound, a response to Brazil's military dictatorship that felt more relevant than quaint Bossa Nova.

MOON: Check out this organ and guitar freak-out. It sounds like nothing you'd ever expect to hear from Brazil.

MOON: Brothers Sérgio Diaz and Arnaldo Baptista grew up listening to short-wave radio broadcasts of American and British pop music. They loved Brazilian music, too, but as they grew older and took in the cataclysmic creativity from the Beatles and Jimi Hendrix and the San Francisco hippies, they wanted to make music that felt wild.

MOON: Of course, to make rock and roll in Brazil in the late ‘60s, Os Mutantes had to be resourceful. The brothers and singer Rita Lee, who's not part of the reunion tour, tapped whatever was around. On one song, Lee used a can of bug spray to suggest a hissing cymbal sound.

The built makeshift guitar effects and devices to transform the voice made from garden hoses and transistor radio speakers. One such gadget figured prominently on this beautiful song from late 1968.

MOON: Now that computers make mixing songs and styles so easy, it might seem that Os Mutantes missed its golden reunion moment. Sérgio Diaz, who's now consultant to several music software companies, doesn't think so. He believes it wasn't just the odd collisions that made his band special - it was the irreverent spirit behind them, the sense of reckless adventure. In the age of the mash-up, we need that more than ever.