Accessibility links
Study Illuminates How Babies Learn to Speak A high-tech machine that monitors infants' brain cells as they listen to speech reveals a key element in how babies go from hearing sounds to speaking them. 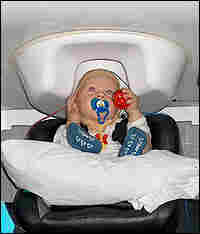 A baby's head rests inside an M.E.G. -- a machine that tracks millisecond by millisecond the activity of brain cells. Courtesy Patricia Kuhl hide caption 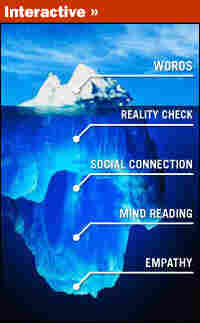 WHAT LIES BENEATH: Explore the social underpinnings of language in this multimedia interactive.

A high-tech machine that monitors infants' brain cells as they listen to speech reveals a key element in how babies go from hearing sounds to speaking them.

From birth, babies' brains are bathed in the sounds of language. But how do they get from hearing those sounds to speaking them?

That's what University of Washington neuroscientist Patricia Kuhl is studying: What happens in the brain that prepares a baby to move from speech perception to speech production?

"We want to know how it is that we train our muscles, our tongues and lips to do that very precise mother-tongue kind of thing," Kuhl says.

To find this out, Kuhl went right to the source: babies. She used a new technology, called M.E.G., that tracks millisecond by millisecond the activity of brain cells. Researchers placed babies in this device -- which looks like an enormous hair dryer -- and then played different sounds to the babies.

The scientists watched the babies' brain activity while they listened to various sounds. Kuhl's team discovered that by 12 months, millions of nerve cells in the brain's two language centers are successfully connected and communicating: first hearing the sound, then producing it.

"The brain is going into its environment and selectively grabbing out sounds that have to do with speech and processing them in a completely different way from the way that other sounds are being processed," says Bill Greenough, a neuroscientist with the University of Illinois at Urbana-Champaign.

Greenough calls the study, which watches the action inside a baby's brain at the speed of thought, a "technical tour de force."

Kuhl's results are published in the journal NeuroReport.