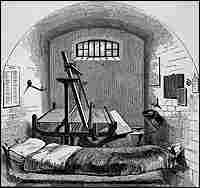 Pentonville is a prison built in 1842 in North London. Its design was influenced by the "separate system" developed at Eastern State Penitentiary in Philadelphia. Stapleton Collection/CORBIS hide caption 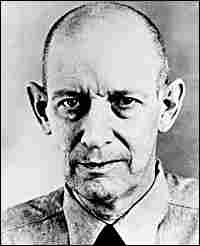 The "Birdman of Alcatraz," Robert Stroud, is one of the prison's most famous D Block residents. Stroud got his nickname from a previous prison stay in Leavenworth, Calif., where he raised canaries. Bettmann/CORBIS hide caption

Thirteen years ago, Pelican Bay State Prison was cut out of a dense forest near Crescent City, Calif. The highlight of the Supermax prison was the Security Housing Unit (SHU), where 1,300 of the state's most hardened criminals are kept in near isolation. San Francisco Bay Area Press Photographers Association hide caption 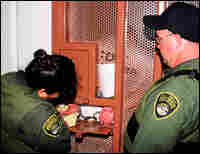 Guards at the Pelican Bay State Prison SHU put handcuffs on an inmate through a small hole in the door. Adam Tanner/Reuters/Corbis hide caption

In 1995, a federal judge rule that conditions at the Pelican Bay facility "may well hover on the edge of what is humanly tolerable." Adam Tanner/Reuters/Corbis hide caption

An overview of key moments in the history of solitary confinement.

1829 - The first experiment in solitary confinement in the United States begins at the Eastern State Penitentiary in Philadelphia. It is based on a Quaker belief that prisoners isolated in stone cells with only a Bible would use the time to repent, pray and find introspection. But many of the inmates go insane, commit suicide, or are no longer able to function in society, and the practice is slowly abandoned during the following decades.

1890 - In an opinion concerning the effects of solitary confinement on inmates housed in Philadelphia (Re: Medley, 134 U.S. 160), U.S. Supreme Court Justice Samuel Freeman Miller finds, "A considerable number of the prisoners fell, after even a short confinement, into a semi-fatuous condition, from which it was next to impossible to arouse them, and others became violently insane; others still, committed suicide; while those who stood the ordeal better were not generally reformed, and in most cases did not recover sufficient mental activity to be of any subsequent service to the community."

1934 - The federal government opens Alcatraz in San Francisco Bay to house the nation's worst criminals. Most inmates spend many hours outside in the yard and on required work details. But a few dozen are kept in "D Block," the prison’s solitary-confinement hallway. One cell in particular is called "The Hole" -- a room of bare concrete except for a hole in the floor. There is no light, inmates are kept naked, and bread and water is shoved through a small hole in the door. Although most inmates only spend a few days in the hole, some spend years on D Block. Conditions are better than in The Hole -- inmates have clothes and food -- but they are not permitted contact with other inmates and are rarely let out of their cells. The most famous inmate on D Block is Robert Stroud, known as the "Birdman of Alcatraz,” who spends six years there. A 1962 movie about Stroud -- and subsequent media reports on the conditions on D Block -- made solitary confinement a fixture of the American imagination for the first time.

1983 - Two correctional officers at a Marion, Ill., prison are murdered by inmates in two separate incidents on the same day. The warden at the time puts the prison in what he calls "permanent lockdown." It is the first prison in the country to adopt 23-hour-a-day cell isolation and no communal yard time for all inmates. Inmates are no longer allowed to work, attend educational programs, or eat in a cafeteria. Within a few years, several other states also adopt permanent lockdown at existing facilities.

1989 - California builds Pelican Bay, a new prison built solely to house inmates in isolation. By most accounts, it is the first Supermax facility in the country. There is no need to build a yard, cafeteria, classrooms or shops. Inmates spend 22 1/2 hours a day inside an 8-by-10-foot cell. The other 1 1/2 hours are spent alone in a small concrete exercise pen.

1995 - A federal judge finds conditions at Pelican Bay in California "may well hover on the edge of what is humanly tolerable" (Madrid v. Gomez). But he rules that there is no constitutional basis for the courts to shut down the unit or to alter it substantially. He says the court must defer to the states about how best to incarcerate offenders.

1999 - A report by the Department of Justice finds that more than 30 states are operating a Supermax-type facility with 23-hours-a-day lockdown and long-term isolation. The study finds that some states put 0.5 percent of their total inmates in this kind of facility, while other states lock up more than 20 percent of their inmates this way.