Accessibility links
Tasty Summertime Tradition in New Orleans "Snowballs" are a summertime obsession in New Orleans. The shaved-ice treats flavored with syrup are sold from corner stands like Hansen's Sno-Bliz. Ernest and Mary Hansen started the business during the Depression. Both died soon after Hurricane Katrina and their granddaughter, Ashley, has taken over.

"Snowballs" are a summertime obsession in New Orleans. The shaved-ice treats flavored with syrup are sold from corner stands like Hansen's Sno-Bliz. Ernest and Mary Hansen started the business during the Depression. Both died soon after Hurricane Katrina and their granddaughter, Ashley, has taken over. 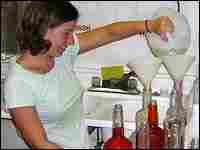 Ashley Hansen mixes the syrups that are poured over finely shaved ice at Hansen's Sno-Bliz. Some of the recipes are secret and they’re all in her head -- passed on from her late grandmother. hide caption 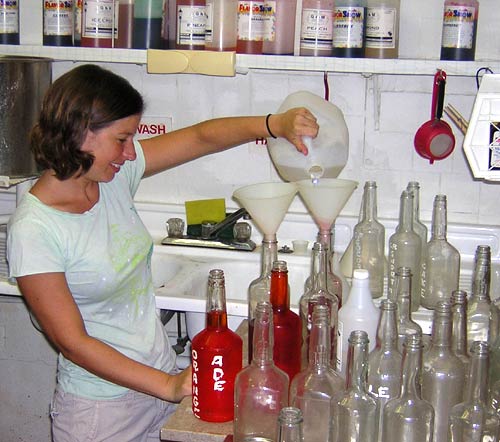 Ashley Hansen mixes the syrups that are poured over finely shaved ice at Hansen's Sno-Bliz. Some of the recipes are secret and they’re all in her head -- passed on from her late grandmother.

In New Orleans, it's been hot and very humid. But that's the perfect combination for one business that's become an institution in the Crescent City, Hansen's Snow-Bliz. Mary and Ernest Hansen started the snowball shop during The Depression. They both died last year, Mary after being airlifted from a hospital following Hurricane Katrina, and Ernest, a few months later. Their granddaughter Ashley has reopened the shop for the first time without her grandparents.

NPR's Jeff Brady checked in to see how she's doing.

Ashley Hansen starts her workday the same as her grandmother did for most of the 20th century, making the syrups that will be poured over finely shaved ice.

Ms. HANSEN: And then this is - this is our sugar and it's going into the big kettle of spring water.

Ms. HANSEN: This is a big honor for you. I don't show our recipes to many people.

BRADY: So at some point, am I going to have to turn my head?

BRADY: History is everywhere. The metal spoon Hansen stirs with was used for so long by her grandmother that the tip is warn down. Her grandfather built the large kettle in his machine shop. And then there's the makeshift cash register, old yellow cigar boxes, even the bottles that the syrup is mixed in have a history.

Ms. HANSEN: These bottles are old glass bottles and they have writing on them, the name of the syrup that goes in them. And…

BRADY: You said they're old glass bottles, but I recognize some of these.

Ms. HANSEN: Well, some of them are old Jack bottles, and old vodka bottles. We had a cousin whose husband drank a lot. And every winter they would save all the bottles for my grandparents. And Cousin Thelma would sterilize them and bring them to my grandparents, and they would start using them.

BRADY: And she's still using them today. Hansen says after the hurricane, and then the death of her grandparents, there was never any question she'd reopen the shop. Past customers started calling up, asking if they could help her clean up from the storm. She reopened at the beginning of summer.

Unidentified Man: Give me a small cream of strawberry with condensed milk.

Ms. HANSEN: A small cream of strawberry with condensed milk, and a small strawberry shortcake.

BRADY: And now, as in the past, you can expect to wait a half hour or more in line. Eleven-year-old Grace Hart(ph) from Gretna, Louisiana, apparently spent some of that time developing a theory on why people choose certain flavors of snowballs.

BRADY: And you like really sweet ones, and somebody else in your family likes really sour ones?

BRADY: Customers say it's not only the syrups that make Hansen's snowballs special, it's the ice. A machine Ernest Hansen built nearly seven decades ago still shaves the ice so fine that it looks like whipped cream cup(ph).

Ashley Hansen is keeping the shop open just three days week right now. It's hard to find help in post-Katrina New Orleans, she says. Often she relies on her father, a local judge, to help out. Eventually, she hopes to keep the shop open seven days a week.

(Soundbite of customers and Dixieland music)

GONYEA: This is NPR News.