Accessibility links
In U.S. Prisons, Thousands Spend Years in Isolation Over the past two decades, solitary confinement has moved out of the prison basement and into whole facilities built just for isolation. These places have many names -- Supermax, intensive-management units, secure housing -- but the meaning is the same: years alone, out of the public view and away from public oversight. 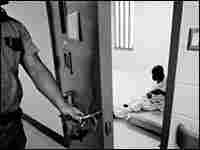 An inmate sits in his solitary confinement cell in a prison in Huntsville, Texas, in this file photo from 1996. Most U.S. inmates who are sent to solitary spend at least five years there. Ed Kashi /Corbis hide caption

Part 1 — Wednesday, July 26: California's Pelican Bay prison is considered the model for most long-term segregation units in U.S. prisons today. NPR visits the prison's secure housing unit to discover what life is like for the more than 1,200 inmates who live there in tiny, windowless cells. (Read Part 1: 'At Pelican Bay Prison, a Life in Solitary')

Part 2 — Thursday, July 27: At Oregon State Pennitentiary, corrections officers are rethinking the idea of isolation and wondering if there might be a better way. (Read Part 2: ' As Populations Swell, Prisons Rethink Supermax ')

Part 3 — Friday, July 28: Daud Tulam spent 18 years in solitary confinement in New Jersey. He's now free and trying to adjust to life on the outside.(Read Part 3: 'Making It on the Outside, After Decades in Solitary')

Over the past two decades, solitary confinement has moved out of the prison basement and into whole facilities built just for isolation. These places have many names -- Supermax, intensive-management units, secure housing -- but the meaning is the same: years alone, out of the public view and away from public oversight.

Isolation today means 23 hours a day in a concrete cell no bigger than a bathroom. One hour a day is spent alone in a concrete exercise pen, about the length and width of two cars.

Most inmates held in solitary have no contact with the outside world other than the U.S. mail. Depending on the state, inmates have limited access to visitors. Most can't watch television, call anyone on the phone or even touch another person while in the units.

Conservative estimates say that there are more than 25,000 inmates serving their sentences this way in 40 states. The inmates aren't in these facilities because of what they did on the outside. No one is sentenced by a court or a judge to serve their time in isolation, except in the rare occurrence of terrorists who could pose a threat to national security.

Inmates are put in isolation because of something they did on the inside. Prison officials say inmates are placed in isolation because they are the most violent, dangerous prisoners. Officials say most inmates in the units are members of gangs that are making their prisons too risky for the officers and the other inmates. But over the years, the violence rates in U.S. prisons have not decreased, nor has the strength of the gangs.

In many states, inmates held in solitary confinement have almost no way out. Many stay in isolation until their sentences run out. And that's pretty common. Almost 95 percent of the inmates in isolation in this country will be released back to the public one day. Many of them will receive little, if any, help with the transition. Texas, for example, took 1,458 inmates out of isolation in 2005, walked them to the prison's gates and took the handcuffs off.

A few states are trying to implement programs to help inmates work their way out of isolation. Several states, including Oregon and Colorado, have started a system that allows inmates to earn back privileges with good behavior and eventually work their way out of isolation. Oregon also offers inmates therapy sessions with a visiting psychologist to work on anger management. And a dozen states now rely on a panel of prison officials outside the prison to decide who goes into isolation and who gets out, so it's no longer solely at the discretion of the warden.

Prisoner advocates such as the American Civil Liberties Union and Human Rights Watch are calling for an end to long-term isolation, arguing that it may make inmates more violent and render them unable to rejoin society. But many prison officials and correctional officers say isolation units are necessary, allowing them to control prison gangs and keep prisons safe for the rest of the inmates.