Accessibility links
Richard Armitage: U.S. Must Talk to Syria Creating a peacekeeping force for southern Lebanon is a centerpiece of the U.S. plan to end fighting between Israel and Hezbollah. But it will be difficult, if not impossible, according to the former deputy secretary of state in the Bush administration. 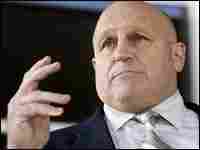 Richard Armitage, in a January 2005 photo, is a former deputy secretary of state. He is currently president of Armitage International, a consulting firm in Arlington, Va. Tarik Tinazay/AFP/Getty Images hide caption

Armitage Has Doubts About a Peacekeeping Force for Lebanon

Armitage Says United States Should Talk to Syria About the Crisis

Creating a peacekeeping force for southern Lebanon is a centerpiece of the U.S. plan to end fighting between Israel and Hezbollah. But it will be difficult, if not impossible, according to Richard Armitage, a former deputy secretary of state in the Bush administration. Armitage says a potential solution to the crisis lies in a step the United States has avoided: talking to Syria.

"I find a lot of chatter about this peacekeeping force, but I find very few people putting their hands in the air saying they've got troops who are willing to do it," Armitage says in an NPR interview. "There are very few nations who have sufficient troops to take on a mission, whether it's a robust mission of disarming Hezbollah, which would mean fighting, or whether it's a mission of being interspersed between the two warring camps."

If such a force were deployed, Armitage says, it would have to be in place for years: "No matter the mission, it would be a long-term involvement because I don't think you can expect the government of Lebanon or the Lebanese armed forces to be able to do any of the heavy lifting for a long time to come."

Armitage says U.S. officials haven't used "all the levers" in finding a solution to the crisis, including having Secretary of State Condoleezza Rice talk directly to the Syrian government. Syria and Iran are considered to have influence on Hezbollah.

"I think [the Syrians] want to get involved," Armitage says. "I think they want to become more central to the solution and you might as well give them the opportunity."

"We get a little lazy, I think, when we spend all our time as diplomats talking to our friends and not to our enemies," he adds.