Accessibility links
Maliki: Iraq is 'Front Line in War on Terror' Iraqi Prime Minister Nouri al-Maliki calls for continued U.S. military and political support of his nation's fledgling democracy in an address to a joint session of Congress. Many congressional leaders -- particularly Democrats -- had criticized the Iraqi leader for failing to condemn the Hezbollah militants currently battling Israeli forces.

Listen
Maliki: Iraq is 'Front Line in War on Terror'

Iraqi Prime Minister Nouri al-Maliki calls for continued U.S. military and political support of his nation's fledgling democracy in an address to a joint session of Congress. Many congressional leaders — particularly Democrats — had criticized the Iraqi leader for failing to condemn the Hezbollah militants currently battling Israeli forces.

From the studios of NPR West, this is DAY TO DAY. I'm Alex Chadwick.

And I'm Noah Adams. Coming up on the program, the harrowing journey home from Lebanon to the U.S. We'll hear the story of scholar Fawaz Gerges in a few minutes.

CHADWICK: First, we're going to Capitol Hill where Iraqi Prime Minister Nouri al-Maliki told the joint session of Congress today that Iraq is a front line in the war on terror.

Prime Minister NOURI AL-MALIKI (Iraq): (Through Translator) I know that some of you here question whether Iraq is part of the war on terror. Let me be very clear. This is a battle between true Islam - for which a person's liberty and rights constitute essential cornerstones - and terrorism, which wraps itself in a fake Islamic cloak, and reality wages a war on Islam and Muslims and values.

CHADWICK: Iraqi Prime Minister Maliki speaking through an interpreter to the House and Senate today on Capitol Hill and an unusually tough crowd. Many Democrats in Congress threatened to boycott this speech because the prime minister has been very critical of Israel for the fight it is waging with Hezbollah militants in Lebanon.

NPR's Brian Naylor's on Capitol Hill. He joins us now. Brian, welcome back to the show. What can you tell us about these lawmakers? Did any of them make good on this threat to boycott?

Hi, Alex. Well, the only lawmaker that I spoke with that was definitely - or talking about - boycotting was Senator Charles Schumer, a Democrat from New York. And I did not see him on the floor, although I must say I spoke with him about a half hour before the speech. He still hadn't made up his mind.

But it appears as though he did not show up. However, most of the Democratic leadership did show up, as well as many, many Republicans - and I should say rank-in-file lawmakers from both sides of the aisle.

CHADWICK: Well, what did the prime minister have to say about Iraq in general?

NAYLOR: Well, it was interesting. He talked an awful lot about how the United States and Iraq, the two countries' fates were tied together. He was very grateful for the U.S. assistance for the hundreds of billions of dollars that had been spent in developing a new democracy in Iraq, and, of course, the thousands of American lives that have been lost in that war.

I think a lot of Republicans were hoping to hear and - the sense that Iraq was building its armed forces up, and that would allow U.S. forces to return home. I think members from both sides of the aisle wanted to hear that.

He did not really say that. He hinted that there was a need for the Iraqis to build up their defense forces, but he did not indicate that they were going to be at that goal any time soon.

CHADWICK: There was some sort of disruption of the speech by an anti-war protestor, Brian. What happened?

NAYLOR: That's right. There was one woman sitting in the gallery. And she interrupted the speech, saying troops, go home now. Iraqis want the troops to leave. Bring them home now.

She apparently had a t-shirt on that had a similar message. She was removed from the House chamber by the Capitol police. That was the only demonstration.

CHADWICK: So, did the prime minister say anything about Lebanon?

NAYLOR: No. He mentioned nothing at all about Lebanon, although we're told that Iraq's foreign minister - in a separate meeting with the congressional leaders earlier today - said that Iraq will join Jordan, Saudi Arabia, and Egypt in condemning Hezbollah. It's not clear exactly when or where that condemnation will take place. 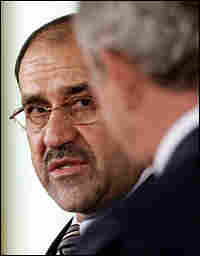 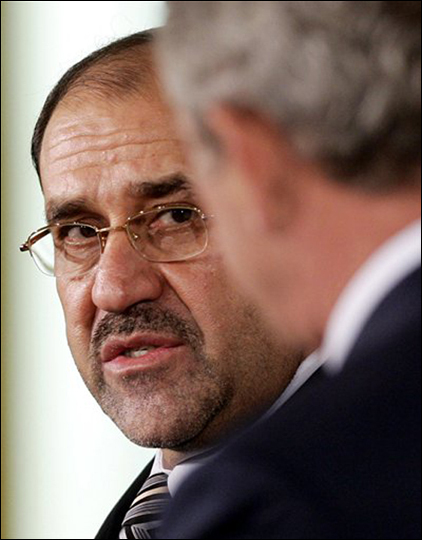 Iraqi Prime Minister Nouri al-Maliki, left, looks at President Bush during a news conference in the East Room of the White House on Tuesday, July 25, 2006.

PC users: Right-click and select "save target as." Mac users: Control-click and "save link as." hide caption

Born Nouri Kamel al-Maliki, the Iraqi premier is also known as Jawad Maliki, a name used during resistance to the Saddam Hussein regime. Read on for key dates in his rise to leadership:

1980: Flees first to Iran, then to Syria, with other Dawa opposition leaders. He would spend more than 20 years in exile.

2003: Returns to Iraq after fall of Saddam

2004: Named to the National Council, a U.S.-brokered consultative body

Nouri al-Maliki carries the weight of Iraq on his shoulders. In the capital, Baghdad, 100 people are killed in sectarian violence daily. A three-year-old insurgency threatens the stability of his country. And the Bush administration is relying on him to steer Iraq on a smooth course that will enable U.S. troops to be withdrawn.

Al-Maliki was chosen as prime minister last spring in a protracted process that forced every political and religious faction to compromise. He is a Shiite, and a senior member of the influential Shiite party Dawa. Before last May, al-Maliki was unknown outside Iraqi political circles. His most prominent contribution to the postwar reconstruction project was helping to write the interim constitution.

But after Iraqis went to the polls earlier this year to elect their first, fully-democratic government in history, the elected members of Parliament took more than three months to form a government.

Al-Maliki's Dawa party was part of the United Iraqi Alliance which won the plurality of seats in the election. At the time, the alliance selected then-interim prime minister Ibrahim Jaafari to become the next permanent prime minister. But leaders from Sunni and Kurdish opposition parties blocked Jaafari's nomination leading to a government deadlock. Sunni and Kurdish leaders claimed Jaafari wasn't capable of representing all Iraqis because of his longstanding ties with sectarian Shiite groups.

The deadlock paved the way for a compromise candidate, Nouri al-Maliki. Al-Maliki was Jaafari's deputy in the Dawa party but less divisive, and thus, more palatable to other Iraqi parties to lead the government.

In the two months he's led the country, al-Maliki has distinguished himself from his predecessors, at times, even lashing out against U.S. military forces in the country. In June, al-Maliki boosted security in the capital Baghdad by shutting down parts of the city to automobile traffic and setting up armed checkpoints manned by Iraqi soldiers.

The program has had limited success. Terrorism continues to kill and maim hundreds of Iraqis each week and there is no evidence to suggest the bloodletting will soon subside.

Al-Maliki's hope of securing, at the very least, Baghdad, will have received a boost this week. President Bush has promised to commit about 1,000 more U.S. soldiers to help patrol the capital. There are about 30,000 U.S. servicemen and women now stationed in and around Baghdad alone.

Further complicating matters for al-Maliki are the ongoing sectarian divisions that have made it difficult for him to gain the trust of Sunni and Kurdish communities.

Al-Maliki joined the Dawa movement in the 1970s while a student in Baghdad. The Shiite resistance movement was banned by the Baathist regime. Al-Maliki was active in the movement through the decade when his involvement was discovered in 1980. Shortly before he was sentenced to death, al-Maliki managed to escape the country and found exile in Syria.

In Syria, al-Maliki was active in the Iraqi opposition movement, even helping to found the U.S.-backed Iraqi National Congress. Once the Saddam regime fell in April 2003, he returned to Baghdad and became involved in the De-Baathification Commission of the interim Iraqi government. This, too, has made it difficult for al-Maliki to gain the trust of Sunni communities. Many Sunnis viewed the de-Baathification process as a conspiracy by Shiites to dominate the country.