Accessibility links
The Slow Build to a Crashing Finish Snow Patrol appears content to issue a series of great, gooey ballads familiar to anyone who's heard Coldplay's "Fix You." "Chasing Cars" is formulaic and utterly irresistible, built to play in trailers for romantic movies involving Zach Braff.

The Slow Build to a Crashing Finish

The Slow Build to a Crashing Finish 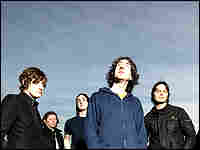 If Irish quintet Snow Patrol is tiring of its role as That Band That Kind of Sounds Like, but Isn't, Coldplay, it shows no evidence of it. Unlike Coldplay, Snow Patrol doesn't seem at all embarrassed that it's not U2, or even Radiohead.

Instead, it appears perfectly content to issue a series of great, gooey ballads familiar to anyone who's ever heard Coldplay's "Fix You." It's all here: the wavery vocals, the reassuring lyrics, the slow-build-to-a-crashing-finish arrangements. Like Snow Patrol's ubiquitous ballad "Run," "Chasing Cars" is formulaic and obvious and utterly irresistible, built to play in trailers for romantic movies, and on soundtracks to Zach Braff movies.

Perhaps more than anything, it demonstrates how good Snow Patrol is at musical shorthand, at conveying great emotion with lyrical economy. "Chasing Cars" contains roughly a few dozen words, total, and its signature line ("Let's waste time / chasing cars / around our heads") suggests it might be a love song for dogs. That's something Coldplay might want to consider, if Chris Martin and company ever get tired of writing songs about Gwyneth Paltrow.