Accessibility links
A Funky Trendsetter, Frozen in Time A venerated art-funk band that helped spawn hip-hop and No Wave, ESG should always stay in the way-back machine: It has such a singular sound that, were it to deviate even for a second, it would come across as calculated and fake. Thankfully, it's still 1978 in ESG's world.

A Funky Trendsetter, Frozen in Time

A Funky Trendsetter, Frozen in Time 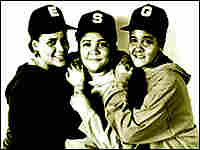 The South Bronx staple ESG helped define the sound of hip-hop and No Wave. hide caption

It's usually considered sad when a band is caught in a time warp, not updating its sound to reflect current tastes. But, like AC/DC, ESG should always stay in the way-back machine. Both bands have such singular sounds that, were they to deviate even for a second, it would come across as calculated and fake, not a progression. Thankfully, however, it's still 1978 in ESG's world.

When the South Bronx's Scroggins sisters formed their band 28 years ago, they had no way of knowing that they would help define the sound of hip-hop and No Wave — not to mention today's punk-funk trend — through such skeletal-groove classics as the Moody EP, which features the oft-sampled classic "UFO," and the Come Away With ESG LP. While the band never broke up, ESG remained mostly silent throughout the '90s, even as the group's legend continued to grow. The 2000 compilation A South Bronx Story introduced ESG to a new audience, spurring the group to make two more albums, including this year's Keep on Moving.

"Gimme a Blast" closes the new disc, acting as the perfect summation of the collection as a whole. The sound is still stripped naked, consisting of bowel-rumbling bass, disco drums, ding-dong congas and rinky-dink keyboard melodies. If that description seems like it could be applied to the great LCD Soundsystem, that's because the talented outfit nabbed the soul of its sound from a mighty funk outfit that's still worth discovering.