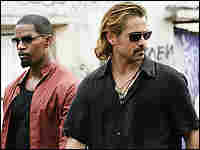 Pastel suits, ultra-cool shades and stubble are back. Miami Vice, the movie, blasts its way into theaters today, and at least one of the original perps returns to the scene of the crime.

In movies from Thief to Collateral, Michael Mann has reveled in stories where the night is alive with menace.

This story has two Miami cops getting in over their heads as they go deep undercover to infiltrate the mother of all drug cartels.

TURAN: Danger not only stalks the characters, it's drawn a bead on writer/director Mann, and he doesn't come away unscathed.

The moviemaking in Miami Vice is impeccable, but its story turns out to be too flimsy a read to support all of the weight put on it. The film does look great, as Mann works once again in razor sharp, high definition digital video. Every image we see is thought out and then thought out again.

If an airplane flies past a cloud, it's the cloud of a lifetime. If a drug dealer has a hideaway, its near Brazil's spectacular Iguazu Falls. Nothing is casual. Nothing is done without yielding maximum visual effect.

TURAN: After the look, the next thing we notice about Miami Vice is the endless supply of attitude. Everyone in the movie is way past mythic, way past cool. If lean, hard, macho looks could kill, there would be even more corpses littering the street.

Unidentified Man #2 (Actor): Once we pick up the load, the next time you hear from us it'll be a date, time, and a place. Like there's an 18-wheeler in a parking lot in North Miami with the keys in the ignition. You pick it up, you drive away smooth. That's how we do it.

TURAN: Part of the fun of a film like Miami Vice, obviously, is watching our heroes be too cool for school. But these guys are just too, too cool. Their cocky attitude feels repetitive and it hamstrings them from acting in any other key.

Mr. FOXX: (As Det. Ricardo Tubbs) White prison gangs (unintelligible). Meth labs and trailer parks, bouncing the old lady around until they get busted back.

Mr. FARRELL: (As Det. James Crockett) Do me a favor.

Mr. FARRELL: (As Det. James Crockett) In return for the risks you took in recovering your (unintelligible), allow me to buy you a drink.

TURAN: But this is a Miami Vice version of romance. Isabella is such a convincing dragon lady that a relationship with the equally self-involved Crockett is doomed in more ways than one.

Ms. LI: (As Isabella) What do you like to drink?

TURAN: Both characters are too in love with themselves to make their pairing believable.

Mr. FARRELL: (As Det. James Crockett) It's a bad idea.

Ms. LI: (As Isabella) This is (unintelligible).

Mr. FARRELL: (As Det. James Crockett) And it has no future.

TURAN: In the end, Miami Vice turns out to be just an old fashioned B picture with an A+ budget. But money can't buy it all, even in Miami.