Accessibility links
Court Holds Russia Responsible for Chechen's Death The European Court of Human Rights has found Russia responsible for the presumed death of a young Chechen man who disappeared six years ago. Thursday, the court leveled a $44,000 fine on Moscow. The landmark case may give hope to families of thousands of people abducted during Moscow's brutal war in Chechnya.

The European Court of Human Rights has found Russia responsible for the presumed death of a young Chechen man who disappeared six years ago. Thursday, the court leveled a $44,000 fine on Moscow. The landmark case may give hope to families of thousands of people abducted during Moscow's brutal war in Chechnya. 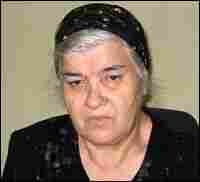 The European Court for Human Rights found Russia guilty of the disappearance of Fatima Bazorkina's son and for failing to carry out an investigation Gregory Feifer, NPR hide caption

The European Court of Human Rights has found Russia responsible for the presumed death of a young Chechen man who disappeared in war torn Chechnya six years ago. And yesterday, the court leveled a $44,000 fine on Moscow. The landmark case in the Human Rights Court could give hope to families of thousands of people abducted during Moscow's brutal war in the region.

The last time Fatima Bazorkina(ph) saw her son, it was on Russian television. Journalists accompanying soldiers during Moscow's assault on Chechnya in early 2000 had filmed a Russian General interrogating 25-year-old Khadzhi-Murat Yandiyev.

FEIFER: The video shows the General questioning Yandiyev after Russian troops have taken the village of Ahan-Kalat(ph). Then he ordered his soldiers to execute him. Take him away, finish him off, shoot him, he said. The video ends with soldiers leading Yandiyev away. His body has never been found. Bazorkina says the video put her family into shock.

Ms. FATIMA BAZORKINA: (Through Interpreter) It was horrible. What kind of feelings can one have? It was a huge thunderclap in the middle of a quiet day. To see that, to hear it, it's just awful.

FEIFER: Bazorkina searched for her son in detention centers in war engulfed Chechnya and elsewhere. She also appealed to Russian prosecutors. But authorities closed the criminal case into the disappearance in 2004, citing a lack of evidence. Bazorkina then approached human rights group who helped her file suit in the Strasbourg court last year.

Yesterday, the court found Russia guilty of her son's disappearance and for failing to carry out an investigation. Bazorkina says the decision gives her a small measure of hope.

Ms. BAZORKINA: (Through Interpreter) I want to find out the truth about what happened to my son. I haven't found any other way forward. I've received no answers from any organization to any of my questions, nothing from law enforcement agencies.

FEIFER: Khadzhi-Murat Yandiyev was a Moscow University student who returned to Chechnya at the start of Russia's second war there in 1999 to search for his father. The next time Bazorkina saw her son was on television, bearded and dressed in military fatigues. He was injured and the video shows soldiers kicking him. A charity called the Russian Justice Initiative helped Bazorkina file her case. Director Ole Solvang says an estimated three to five thousand people, mostly Chechens, have disappeared since 1999.

He says the Strasbourg court's decision is especially important because abductions are still taking place.

Mr. OLE SOLVANG (Director): What this decision will mean is that there is some hope of redress for these types of violations. A lot of people in Chechnya and the North Caucuses, they've lost faith in the system. So what this case will actually prove to them is that it is possible.

FEIFER: Solvang says in most disappearance cases there's significant evidence the pro-Moscow forces are responsible. It's unclear how Russia will respond to yesterday's ruling. The government says it takes the problem of disappearances seriously, but the general seen ordering Yandiyev's execution has since been promoted to the command of all troops in Southern Russia.

Still, Fatima Bazorkina says she hopes the Strasbourg court's decision will help in her goal of having a Russian court judge those guilty of her son's disappearance. We have laws, after all, she says. We have to uphold them.