Accessibility links
Sitting on the Porch: Not a Place, But a State of Mind All Things Considered asks you to sit down a spell as it examines an important place in summertime mythology, the front porch: its history, its role in American life and literature and its rich symbolism.

Listen
Sitting on the Porch: Not a Place, But a State of Mind 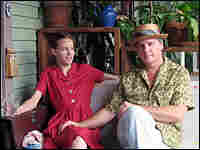 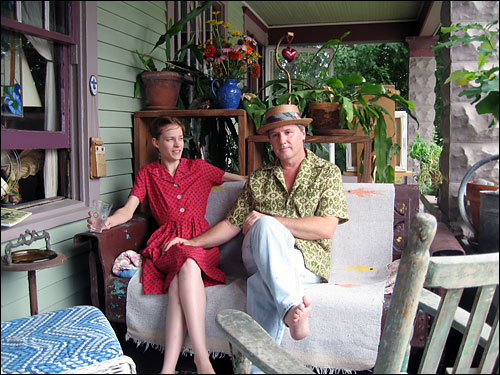 Tell us about a treasured porch memory or what's happening on your porch this summer. We may use these stories on air or on NPR.org.

Send Us Your Porch Story

On a hot summer night in Washington, D.C., a group of teenagers are hanging out on a front porch at Kenndra Powell's row house. Powell, 19, leans on the railing to point out porches up and down the street. Each, she says, has its own personality.

"That porch is the nosy house," she says. She points out the loud porch, the chill porch.

She says a house without a porch is boring.

"They're missing the fun that we're having out here," Powell says, before debating a friend about the merits of a porch versus a big yard -- a discussion that goes on some time.

Porches, debate and democracy go together. And it's no surprise the tradition of gracing an American home with a front porch goes back to the early days of the country's history.

This summer, All Things Considered is examining the front porch: its history, its role in American life and literature and its rich symbolism.

Porches were a necessity before air conditioning, whether it was the screened sleeping porch or the broad, columned veranda where iced tea -- and gossip -- were plentiful.

In the mid-1800s, a well-known landscape gardener named Andrew Jackson Downing began writing about his vision of the American home -- and how it could stand apart from English architecture. The porch was key.

It functions as an important "transitional space between the private world of the family and the public realm of the street," notes David Schuyler, author of a biography of Dowling.

But today, many homes don't have that transitional space, and air-conditioning, television, computers and other enticements draw people inside the home. American porch culture isn't what it used to be. Claude Stephens is trying to change that.

By day, he's education director at an arboretum in Louisville, Ky. By evening, he's known as Crow Hollister, his "porch-sitting alias." Stephens is founder of the Professional Porch Sitters Union Local 1339. The group doesn't have a motto, just a suggestion: "Sit down a spell. That can wait."

"The Professional Porch Sitters Union is about not planning anything. Anybody can call a meeting at any time, and attendance is optional," Stephens says.