Accessibility links
Leavitt Charity's $500,000 Returns, in the Form of Rent Part of the funds distributed by a Utah foundation established by Health and Human Services Secretary Michael Leavitt and his family is used to pay the rent for students living in Leavitt-owned apartments. The foundation is under fire for giving away little money -- but securing substantial tax advantages for Leavitt's family.

Articles of Incorporation for the Leavitt Foundation 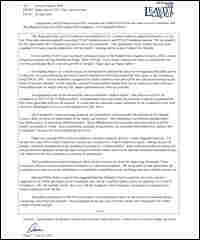 Text of a letter from the Leavitt Group outlining its position. hide caption 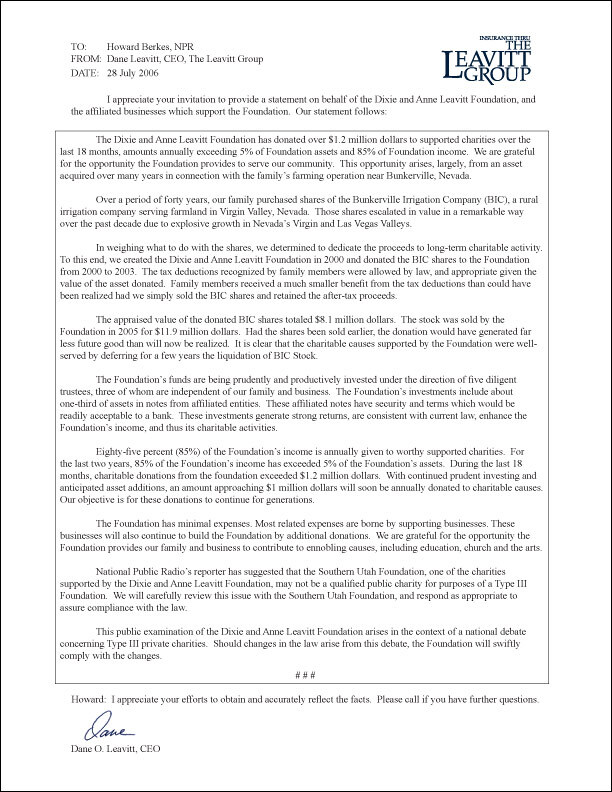 Text of a letter from the Leavitt Group outlining its position.

There’s a new twist to the story about Health and Human Services Secretary Mike Leavitt and his family’s charitable foundation. Last week, we and others reported that the Leavitt family charity is a special kind of foundation that bi-partisan forces in Congress are trying to restrict. It can offer huge tax deductions, while loaning money back to donors, and giving little away. NPR has discovered another Leavitt foundation practice that also raises eyebrows.

The program also received funds directly from Leavitt Land and Investment. Together, the Leavitt company and the Leavitt Foundation put $578,500 in the housing scholarship program. And the Leavitts got all that money back. The needy students were placed in housing units owned by Cedar Development Company, another Leavitt family business.

This means that the Leavitt entities contributed more than a half-million dollars, received tax deductions for that amount, and then got the money bank.

“It looks very suspect when the source of the money is the Leavitts, and the beneficiary of the payments of the housing money is also the Leavitts,” says Rick Cohen of the National Committee for Responsive Philanthropy. “I don’t think that the public anticipates that money, put into an entity that is supposed to be something like a philanthropic institution, would be used in a way that directly benefits the people who receive a charitable deduction for their donations. It makes the charitable purpose somewhat suspect.”

Suspect, but legal, according to tax-exempt organization experts consulted by NPR. The Dixie and Anne Leavitt Foundation is what the Internal Revenue Service calls a Type III Supporting Organization.

The foundation has the ability to legally loan money to family corporate interests or family members. It can even donate money that ends up in the coffers of family businesses, as in the case of the rent money paid for housing scholarships.

These loans and rents must be at market rates. Information supplied by the Leavitts depicts the loans as market-rate loans. And research conducted by NPR indicates the scholarship rents are also at market rates.

Independent use of donated funds is also key to Type III Supporting Organization status. A “supporting organization” like the Leavitt family foundation must name a principal recipient of its contributions. The Leavitts picked the Southern Utah Foundation.

One former officer of that foundation complains that the Leavitts exercised undue influence over the uses of its donated funds. Rhea Tuft resigned as secretary-treasurer of the Southern Utah Foundation to protest the scholarship arrangement.

“I just felt like we were being used to muddy the waters,” she says. “If someone did come in and look at it, there was just one more foundation involved. They might get bogged down. They wouldn’t look at it all the way through. [They] wouldn’t see the whole picture.”

Tuft acknowledges, however, that the Southern Utah Foundation did assert independence when it came to some Leavitt donations. The foundation’s board rejected a funding proposal that would have sent Leavitt family members to Latin America to work on a water project. Foundation President Scott Truman adds that the board votes on Leavitt funding proposals, thereby maintaining the independence the law requires.

Clues in the Paperwork

Before Rhea Tuft left the Southern Utah Foundation, she left a clue about the scholarship program in the foundation’s federal tax forms.

Someone looking closely at the forms would find something suspicious. In fact, that’s what happened this week when NPR examined these and other documents related to the activities of Leavitt family charities.

Southern Utah Foundation President Scott Truman said there must be some mistake.

“The Southern Utah Foundation has never given any money to the Dixie and Anne Leavitt Foundation,” he told NPR.

He referred us to former treasurer Rhea Tuft, who admitted to a bit of civil disobedience. Tuft said the money listed actually went to the housing scholarship program. But she listed it as a contribution to the Leavitt Foundation, because she knew the money eventually ended up back in Leavitt bank accounts.

It’s not, says Rick Cohen of the National Committee for Responsive Philanthropy. “It’s really not [the Leavitts’] money. Once the money is in a non-profit institution, it is money that the American taxpayer has entrusted to them for the best public uses.”

Cohen suggests that the use of that money for rent paid to the Leavitts is more personal than charitable.

"This is certainly not what I would call a tax scam,” Boisture says.

He suggests the Leavitts did not profit from the arrangement.

"It’s not like the Leavitts got a big charitable deduction upfront, and then got their money back tax-free," he says. "When they received the rent payments, they had additional taxable income that precisely offset their initial deduction. They got to pay the additional tax later -- and there’s some benefit in that tax deferral. But they also lost the ability to earn interest on the donated funds. And more important, a bunch of students who would otherwise have had to pay rent got rent-free apartments."

The Leavitts did fill apartments that they had trouble filling when the program began. They presumably profited from the collected rents. And they failed to engage in the spirit of philanthropy, which requires sacrifice, suggests Rick Cohen of the National Committee for Responsive Philanthropy.

“People contributing to charities don’t expect to come out even," Cohen says. "That doesn’t sound like charity.”

"It appears to me that the whole philosophy behind the Type III Supporting Organization was that, essentially, you utilized the economic ecosystem of a strong business to help foster philanthropy,” Leavitt said.

HHS Secretary Mike Leavitt has no direct involvement in the Dixie and Anne Leavitt Foundation, according to his brother Dane. Secretary Leavitt still owns shares of the Leavitt company that received tax deductions for foundation donations.

And he owns shares in Cedar Development Company, which received rental income from the Leavitt-funded scholarship program. But he may have a bigger problem, and he shares that problem with the rest of the family.

A Problem for the Secretary?

NPR’s review of the tax returns filed by the Southern Utah Foundation indicate that the foundation does not qualify to be a recipient of donations from a Type III Supporting Organization. That includes the Dixie and Anne Leavitt Foundation and the Michael and Jacalyn Leavitt Foundation, a relatively new charity started by Secretary Leavitt.

“Supported organizations” like the Southern Utah Foundation must be “public charities” as defined by the Internal Revenue Service. That includes being the recipient of a significant number of donations from the general public. The Southern Utah Foundation failed to meet IRS minimums for public contributions for the last three tax years, according to its own tax forms.

Southern Utah Foundation President Scott Truman says he’s “not aware of the public charity issue.” But he thanked NPR for alerting him to the problem and vowed to look into it, as did Dane Leavitt, spokesman for the Leavitt family.

The discrepancy could raise questions about past and current Leavitt foundation donations funneled through the Southern Utah Foundation. And it could force the Leavitts to find another primary charity.

Secretary Leavitt was offered an opportunity to respond to this story. His spokeswoman referred questions to Leavitt family spokesman Dane Leavitt.

The Leavitt family spent many hours responding to document and information requests from NPR and provided every document requested.