Accessibility links
Aryan Brotherhood Leaders Convicted of Murder Four leaders of the Aryan Brotherhood prison gang are convicted on charges of murder, conspiracy and racketeering. The verdict, delivered in a In Santa Ana, Calif., courtroom, was hailed as a victory for federal prosecutors trying to curb the gang's violent and racist activities.

Four leaders of the Aryan Brotherhood prison gang are convicted on charges of murder, conspiracy and racketeering. The verdict, delivered in a In Santa Ana, Calif., courtroom, was hailed as a victory for federal prosecutors.

The charges are part of an ongoing effort to curb the group's violent and racist activities behind bars.

Two of the four gang members, Barry Mills and Tyler Bingham, could get the death penalty. The other two defendants may receive life sentences.

The four defendants were charged with conspiracy to commit murder to extend their control over drug trafficking, gambling and other prisoners. The government also accused them of fomenting a race war behind bars.

As the verdicts were read, defendants Barry "The Baron" Mills, the gang's leader, and Tyler "The Hulk" Bingham, Christopher Gibson and Edgar "Snail" Hevle barely reacted.

The picture of the Aryan brotherhood painted by witnesses was of a particularly ruthless gang, which ordered murders and assaults with notes written in code -- and sometimes in an invisible ink made from fruit juice or urine.

But gang members apparently saw themselves differently, citing as their inspiration thinkers from Neitzche to Machiavelli. One witness said there was a formal oath: Integrity, loyalty and silence comprise the principle ethics of honor, it began.

The defense argued that their clients had only banded together to protect themselves in the violent and racially divided prison system. They also contended that the government witnesses were perjurers whose testimony was bought with cash or promises of parole.

This case was particularly complex, requiring the jury to answer nearly 80 questions. It's also believed to be one of the largest federal capital cases in the United States.

Hevley and Gibson will be sentenced on October 23. They could receive life in prison. Mills and Bingham, his top lieutenant, could be sentenced to death for ordering the murders of two African-American inmates. The penalty phase begins August 15. 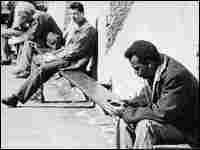 Convicts sit in the exercise yard at California’s San Quentin State Prison in 1965. The year before, the Aryan Brotherhood organized because of racial tensions in the prison. Harry Benson/Express/Getty Images hide caption

The Aryan Brotherhood began with incarcerated white supremacists who aligned themselves against black and Mexican prisoners. Over its four-decade history, the gang has become less about racist ideology (it has allegedly formed alliances with the Mexican Mafia, another prison gang) than about the acquisition of power.

The "Brand," as the gang is also known, is a selective group; often, a murder or other significant act of violence is required to gain membership. In the 10-year period ending in 1985, for example, incarcerated AB members were linked to 40 homicides in California alone. A brief history of the gang:

1964: The Aryan Brotherhood is founded in California's San Quentin maximum-security prison. Irish bikers formed the Brotherhood to fight against the Black Guerrilla Family. It is rumored that the AB sprung from a 1950s gang known as the Bluebirds.

1980: Throughout the 1980s, the gang becomes more organized as it establishes a chain of command. Two factions of the gang exist -- federal and California state. The federal faction creates a three-man commission to supervise gang activity in federal prisons. Allegedly, Barry Mills and Tyler Bingham are selected to oversee the gang's actions as high commissioners.

1982: An FBI report states that members of the Brotherhood are recruiting new members from prisons around the country. Prison officials try to disband the group by moving members throughout the correctional system. The AB forms a California commission and council that must approve the murder and assault of gang members who violate the organization's rules.

Oct. 22, 1983: Four guards are stabbed, two fatally, by AB members at the U.S. Penitentiary in Marion, Ill. It is the first time in federal prison history that two guards are killed on the same day.

1990s: Authorities relocate most of the Brotherhood's leaders to "Supermax" prisons, where prisoners are held in single cells for almost the entire day. The gang continues murdering prisoners and trafficking drugs.

1992: Assistant U.S. Attorney Michael Jessner begins investigating the gang after it is linked to the strangulation of a prisoner in his cell at the Lompoc federal prison in California.

1993: The AB's federal commission forms a council that organizes day-to-day gang activity in the federal faction.

Fall 1994: Michael Patrick McElhiney arrives at the maximum-security federal prison in Leavenworth, Kan. He came from the Marion federal prison, where he served time with Barry Mills. McElhiney quickly becomes a much-feared AB gang member. In 2002, he is charged with running the gang's day-to-day operations at Marion and with controlling drug trafficking at Leavenworth.

1997: Barry Mills and T.D. Bingham allegedly order a race war at a prison in Lewisburg, Pa., leading to the deaths of two black inmates.

Aug. 28, 2002: Assistant U.S. Attorney Gregory Jessner indicts nearly all the members suspected of being leaders in the gang. He charges them with carrying out stabbings, strangulations, poisonings, contract hits, conspiracy to commit murder, extortion, robbery and narcotics trafficking.

March 14, 2006: The first in a series of gang-member trials begins in Orange County, Calif., for Barry "The Barron" Mills, T.D. "The Hulk" Bingham, Edgar "The Snail" Hevle and Christopher Overton Gibson. The four are accused of ordering or participating in 15 murders or attempted murders in the last 25 years. Federal racketeering charges are brought against 40 AB members, including Michael McElhiney. In a 140-page indictment, federal prosecutors outline gang actions that allegedly resulted in 32 murders or attempted murders in and out of prison.

July 13, 2006: The defense makes its closing arguments in Santa Ana, Calif., in the trial against accused gang members Mills, Bingham, Heyle and Gibson.