Accessibility links
Dining Al Fresco Can Be a Recipe for Risk Weekend Edition food essayist Bonny Wolf ticks off the many things (including ticks) that can spoil the summer picnic.

Listen
Dining Al Fresco Can Be a Recipe for Risk

Weekend Edition food essayist Bonny Wolf ticks off the many things (including ticks) that can spoil the summer picnic.

Temperatures in the 90s, even the 100s, have driven many people to seek air-conditioned refuge for the duration of the heat wave. Some hardy souls undoubtedly still insist on holding picnics. After all, 'tis the season for al fresco dining.

For those who insist on eating outdoors, WEEKEND EDITION food essayist Bonny Wolf has some advice.

It's all about the table. Eating outdoors is appealing, but do we have to sit on the ground? The idealized picnic is splendor in the grass, lush parks, shade trees, blue skies, big blankets, wicker baskets, children playing Frisbee as grownups put out the spread. But the lush parks are dotted with hidden rocks, clumps of dirt, and bug condos. The shade trees drop leaves, twigs, and pine needles in your hair and in the potato salad.

Blue skies one minute yield to thunderstorms the next. The blanket instantly becomes a rumpled mess the moment the first person attempts to sit down on it. And the wicker basket is too heavy to lift, let alone carry. Oh, and you forgot the corkscrew. If you're at the beach, add a little sand in your food, the flavor of suntan lotion with your watermelon, and, of course, the promise of a painful sunburn.

To be honest, a picnic without a table is no picnic. Some places are worse than others. You'll long for regular black ants if you picnic anywhere but a high porch in Texas, home of the fire ant. Fire ants are aggressive, stinging insects, and they work in gangs. They swarm up your leg and attack. It feels like you're on fire. Fire ants can kill small animals, so leave the pets at home. Then there are mosquitoes, gnats, flies and yellow jackets. Let's face it. This is insect party time.

The picnic discomfort doesn't stop with the bugs. There is the food, too. Gooey barbecued chicken slides off the soggy paper plate on to your white pants. Your cup of wine, if you get the bottle opened, inevitably spills on the disheveled blanket. And a wayward Frisbee knocks over the just opened jar of pickles.

The Victorians were major picnickers. Like today, picnics were casual. They only took two or three servants who went ahead with the joint of cold roast beef, the iced champagne, and the kerosene burner for tea. There was sometimes a tent to provide shade from the sun and protect from tree droppings, and other droppings. The feast was served on fine china and silver candlesticks adorned the table. Yes, the table. Now that's a picnic.

HANSEN: Bonny Wolf is a contributing editor of NPR's online food column, Kitchen Window. Check it out for more summer food ideas at npr.org/kitchenwindow. Wolf's book, Talking With My Mouth Full, will be published this fall. 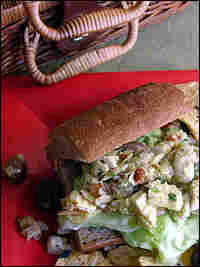 Chicken salad is a perfect dish for a picnic -- indoor or out. Scroll down for chicken salad and deviled eggs recipes, reader comments. Andrew Pockrose hide caption 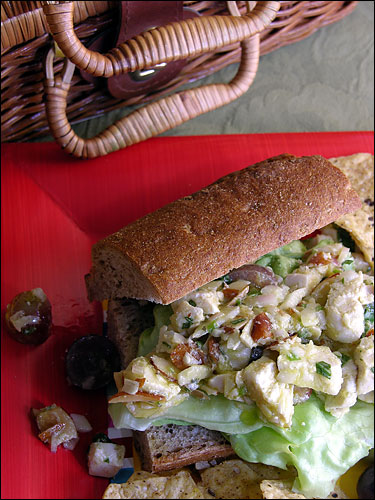 Chicken salad is a perfect dish for a picnic -- indoor or out. Scroll down for chicken salad and deviled eggs recipes, reader comments.

There's something magical about a casual meal of salads or sandwiches, a good baguette, a ripe cheese and some fruit enjoyed en plein air; in other words, a picnic.

The word picnic comes from the French pique-nique and was originally a potluck social event. By the 19th century, picnics were linked to excursions and eaten outside in beautiful settings.

A pleasure excursion, a beautiful setting -- the romance is undeniable. That must be why picnics have been portrayed in films, literature and even captured on canvas (think Manet's Le Dejeuner sur L'herbe.)

These fine-arts versions conjure an ideal pique-nique: a lush period piece shot through a gold-filtered lens, a checkered blanket set out by a lake on a cloudless day, the young and glamorous unpacking a wicker basket overflowing with rare delicacies. And if children exist, they are either at home with the nanny or off riding horses.

In the real-life version, though, the nanny must have the day off because the kids are not only present, they're complaining of starvation; the little one is crying because she won't eat deviled eggs or chicken salad; and the beautiful fruit salad she will eat is at home on the counter where we forgot it. Then, before anyone's taken a bite, a greenhead fly attacks.

We've moved from a verdant period film to the set of a B-movie. And we Bostonians are the lucky ones, because as you travel to warmer parts of the world, bugs take on even more horrifying proportions. (Even though it happened more than a decade ago, I still vividly remember a hand-sized spider scurrying across my hotel room wall in St. Kitts. A picnic in the tropics must be the quest of a hero -- or a fool.)

Despite all the travails, a casual repast eaten outside hasn't lost its allure. My family of four has reached a compromise with nature, though. Rather than packing everything up, hauling it somewhere off the beaten track and keeping our fingers crossed that the weather-insect-pickiness stars all fall into alignment, we opt for the less exotic.

For us, it's the narrow walkway in front of our house, but it could just as easily be a fire escape or even a cement stoop in New York City. It really doesn't matter as long as we're able to feel the sun on our backs as we eat, while still maintaining easy access to running water, the bathroom and extra napkins, not to mention any critical foodstuffs we might have forgotten.

In fact, my 5-year-old daughter and I love picnics so much we'll happily set one up in the living room if we're in the mood for a party but are having what New Englanders call "weather," which is most of the time. I realize naysayers would assert these don't technically qualify as picnics, but 5-year-olds are masters of imagination.

On these special outings (innings?), we're enjoying a perfect meal on a flawless day in our minds. It's always insect-free, and we each have something we like on our plate.

True, it's not the picnic of our dreams. But given what we have to work with here in Boston, it just may be the best of all possible worlds.