Accessibility links
Visions of Two Lebanons Photos from an American freelancer living in Beirut capture how the war between Hezbollah and Israel is affecting the largely Christian north and the Muslim south in very different ways — and also how the tragedy links both sides. 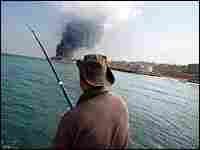 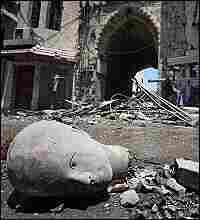 The disembodied head of a statue lies in the rubble of a site bombed by Israelis. Stephanie Sinclair hide caption

The nation of Lebanon is a study in contrasts — the southern half is largely Shiite Muslim, and whole towns and villages are controlled by Hezbollah. But to the north, the country is dominated by Christians.

But in the tightly woven fabric of the city and the nation, everyone is feeling the effects of the battles between Hezbollah and Israel. There are an estimated one million refugees fleeing the fighting, many with nowhere to go.

Stephanie Sinclair, a freelance American photographer living in Beirut for the past two years, captured images of both sides of a nation in crisis.