Accessibility links
After Afghanistan: Amputee Rebuilds Life in America Army Sgt. Tim Brumley says he had expected things to be pretty quiet in Afghanistan, where he was deployed last year after 10 months in Iraq. But he ended up losing his foot after being wounded in a major firefight with the Taliban. 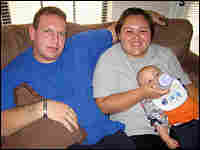 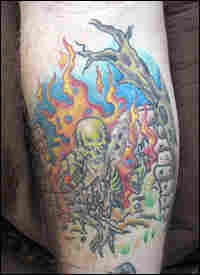 Brumley calls this his "therapy tattoo." He says the image is of the Taliban fighter who attacked him in Afghanistan. "It looks like he is being pulled into hell," Brumley says. Andrea Hsu, NPR hide caption 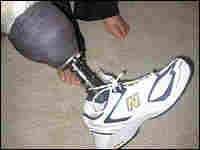 Brumley's left leg was amputated nine inches below his knee. He asked his prosthetist to make him a foot that would allow him to surf. Andrea Hsu, NPR hide caption

Listen to a two-part series by Melissa Block on the burn unit at Brooke Army Medical Center in San Antonio.

When Army Sgt. Tim Brumley was deployed to Afghanistan last year, he says he expected things to be pretty quiet.

"We all thought it would just be going over there and winning the hearts and minds of the women and children, digging wells, setting up school and pretty much playing peacekeeper," he says. "We didn't know we'd get into hours- and even days-long engagements of pretty heavy combat."

In May 2005, four weeks after arriving, Brumley was wounded during a major firefight with the Taliban in southern Afghanistan. He lost his left foot and part of his leg, which was amputated nine inches below the knee.

After he came home to San Antonio, the 26-year-old got a new tattoo on his forearm. The vividly colored tattoo tells the story of what happened when a Taliban fighter shot him.

He calls it his "therapy tattoo" and it serves to remind him that he is still alive.

He does rehab three times a week at Brooke Medical Center at San Antonio's Fort Sam Houston. Lately, he's been running on a track.

Brumley's wife, Teresa, says that when her husband went to Afghanistan, she too wasn't really worried. Not like when he was in Iraq, she says, when she would panic every day.

"Afghanistan is patrolling, peacekeeping, so your mind is at ease," she says. "But it's not as easy as they made it seem like it is."

But she doesn't feel misled, she says. "They are in a war. For us to have our guard down, we're being naive."

Tim Brumley says he thinks the United States will be out of Afghanistan in the next five years or so. Iraq, though, is a different story.

Brumley will soon be medically retired from the Army. He's about to start taking classes at a nearby community college, and he hopes to become a teacher and an athletic coach.

Next month, he and eight other war amputees will be going to California for a surfing clinic and competition. He's never surfed before but says he's always wanted to learn. In fact, he told the prosthetist at the hospital to make sure to give him a foot he could surf with.

"I don't want to miss a minute," he says. When he thinks about it, he says, "I lie awake in bed like a little kid on Christmas Eve."