Accessibility links
Tweens and Media: What's Too Adult? From ads to music, the airwaves and circuits are filled with messages and images about sex. Tweens -- kids roughly between the age of 8 and 12 -- are especially vulnerable to these suggestions, since they are what marketers call "age aspirational." 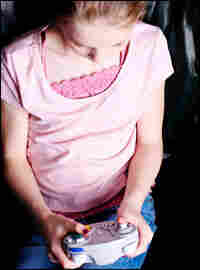 Exposure to age-inappropriate content can come at kids from all directions as media platforms proliferate. Says one 11-year-old of imagery in the video game Grand Theft Auto: "It's just really weird." iStock hide caption

'Behind These Hazel Eyes' 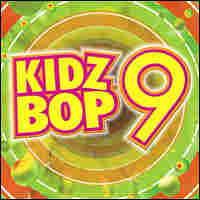 Hear Part One of the Series

For Toddlers, a World Laden with Advertising July 31, 2006

Kids between the ages of 8 and 12 are often labeled "tweens," and a scene at Boston's Fayerweather Street School illustrates the term: While kids in one area of the school set up a video game on a computer, others nearby cloak themselves in fabric and pretend to be monsters.

While old enough to be media-savvy and technically proficient, tweens are still young enough to engage in imaginative play -- and often too young to process much of the sexual content that comes their way on the screen and in music.

Connie Biewald, who has been teaching sex education at Fayerweather for 18 years, says that kids haven't changed much. "They don't really know a lot more, really, in terms of deep understanding," Biewald says. "But they're exposed to a lot more than they used to be exposed to."

Even content that is tailor-made for kids may seem surprisingly grown-up to some listeners. Kidz Bop, a best-selling series featuring studio singers covering well-known songs while accompanied by a chorus of kids. The albums have been extremely successful, and earlier this year, Kidz Bop 9 debuted at No. 2 on Billboard's top albums chart.

Kidz Bop creator Craig Balsam says the music, which is marketed on TV, attracts kids as young as 4 years old. But its biggest audience is probably 8 to 10 years old, the sweet spot of the "tween" market. While Kidz Bop does change some lyrics for its young audience, most of the songs are cool and – well -- sexy.

"It's hard to have a brand for kids that has absolutely no edge," says Balsam. "I really think they would be completely disinterested."

Parents daily face innumerable decisions about the way their kids interact with the media. Letting an 8-year-old listen to music that's a little sexy, or watch certain TV programs, seems pretty innocent compared to some alternatives. So the question becomes: Where does a parent draw the line?

Samantha Skey, a vice president at Alloy Media + Marketing, says that tweens are still very influenced by their parents, who hold the purse strings and thus are involved in the buying decisions.

"There is significantly less rebellion in young people today ... and a more aspirational relationship between parent and child," Skey points out.

Recent research from the Centers for Diseases Control and Prevention and other sources seem to confirm Skey’s assessment; suicide rates, teen pregnancy and drug use are all down.

But Wheelock College Professor Diane Levin still sees cause for concern. She’s writing a book about kids and the media, and says that our culture is so saturated with sexual images that some parents may not realize how their children process those images. She cautions parents to consider where it all may end.

"Think about how [it looks] through their eyes, what kinds of understandings can they make," Levin says. "It's harder and harder to think about what it means for someone who's fresh, who doesn't understand, who can't think the way we do."

Experts say that communication is the most potent line of defense; even the most careful parents can't be with their kids all the time.

Barbie Is the Least of My Problems, as a Mom 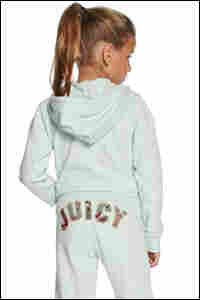 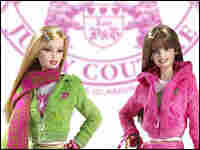 What goes around comes around: Juicy Couture Barbies are modeled on the label's founding designers, Pamela Skaist-Levy (left) and Gela Nash-Taylor. hide caption 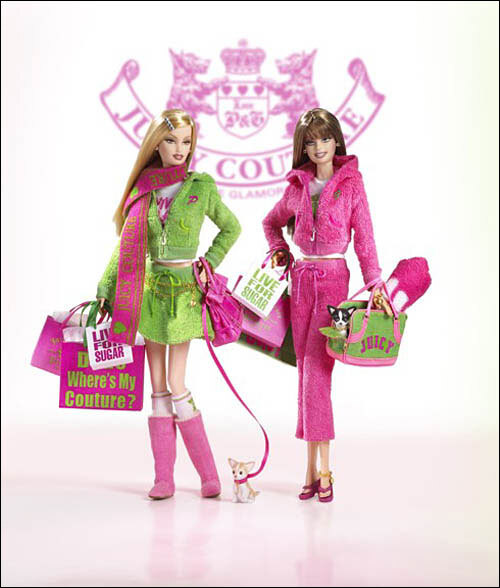 What goes around comes around: Juicy Couture Barbies are modeled on the label's founding designers, Pamela Skaist-Levy (left) and Gela Nash-Taylor.

When I was eight years old in 1978, Barbie was forbidden. Barbie was the big influence my feminist mother was worried about. Barbie was too sexy. Barbie was unrealistic. I was not allowed to have a Barbie.

So I went over to my cousin's house to play with her Barbies. She had several, along with a Barbie townhouse, a Barbie camper van, and a Barbie Super Vette. My cousin named her favorite Barbie Crissy after the Suzanne Somers character in Three's Company. To me and my cousin, Barbie and Crissy represented glamorous adulthood. Crissy the Barbie had this gauzy three-piece yellow and white outfit. There was a puffy overshirt with a camisole and a sheer, sweeping skirt. Very sexy.

The sexy was what my mother was worried about. She was worried that if I played with Barbie I would want to have big breasts, feet that were frozen into position for wearing high heels, and lots of sexy yellow clothes. She didn't want me to want the glamorous adulthood that Barbie portrayed. She was so worried about this that she banned Barbie in our house. She dug up something called The Sunshine Family for me to play with. They were Barbie-sized dolls – a mother, father, little girl and baby boy – but the mother had flat feet. Instead of a Super Vette there were directions for making your own baby crib out of those green plastic baskets strawberries come in. My mother spent a lot of time supervising Sunshine Family craft projects. I think she felt that if I spent enough time on them I would forget that I wanted a Barbie. If I forgot that I wanted a Barbie, I would forget to want big breasts and high heels and sexy clothes when I grew up.

When I do all of this worrying -- and I do a lot of it -- Barbie is the least of my worries. I don't think that the meaning of Barbie has changed in the last 30 years. But up around her have grown so many other influences on girls that the power of Barbie has been diluted. Barbie represented a host of sins to my mother's generation of feminist mothers. They didn't want us to play with a toy that had sexy clothes. But when I go shopping for my toddler daughter, I am not thinking about the clothes her dolls might wear. I'm concerned about the clothes that are in her size but seem to be meant for a sexy Barbie doll.

Check out the size-2T shirts with sparkles and butterflies and the word "Juicy!" written right over the place where her breasts will grow -- 10 years from now. She could wear them with the matching hip-huggers -- over her diapers. She could try out the leopard-print tights or the jeans with "Sweet" written over the butt in rhinestones. It's hard to find little girl clothes that aren't saucy or sexy or overpriced. A big topic on the playground circuit is where to find affordable little girl clothes that look like they are meant for little girls, not little Barbies.

There are so many ways that kids are sexualized these days that my mother's Barbie ban seems sweet and quaint. I didn't see it that way at the time. I thought she was being cruel and unfair. I was jealous of my cousin and her trunk full of Barbie clothes. Now my cousin's oldest daughter is five, the new target age for Barbie. My cousin said that she got out all of her old Barbies recently. Her daughter played with them a little but she just wasn't that interested. She is very interested in sparkly shoes – especially flip-flops – and Disney princesses.

When it comes right down to it I don't think my mother's Barbie ban was as effective as she'd hoped. I went right ahead and played with Barbies every chance I got, just not at home. I got a lot of other messages about women and sexuality and dress from my mother, especially when I watched her dress and put on her make-up. What I didn't have in the 70s – and that my daughter has now – are all of the commercials and video games and pop-up ads pointed right at her and the sexuality she doesn't even know she has yet. I couldn't ban all of those things even if I wanted to. I have to hope that she will watch me getting dressed, just like I watched my mother, and I hope she learns from that, too.

The power of Barbie has been diluted, for mothers and for daughters. If Barbie symbolized every antifeminist attitude my mother held dear, for me she's just one of many toys that might teach my daughter a message I find distasteful. If Barbies represented the apex of grown-up cool to me and my cousin when we were kids, Barbie is just another doll to our daughters. They can wear their own sexy clothes if we let them. They don't need to pretend with Barbies.