Accessibility links
MTV at 25: From Upstart to Parent Network On this day 25 years ago, a cable channel called Music Television debuted, broadcasting "Video Killed the Radio Star" by the Buggles as its first video. The Buggles pretty much disappeared, but MTV became a behemoth. Today, the corporation owns more than 50 channels in 28 languages and 168 countries.

Listen
MTV at 25: From Upstart to Parent Network 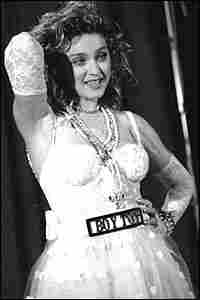 Madonna poses at the MTV Video Music Awards on Sept. 14, 1984. This was before she got into Kabbalah. hide caption

What Was on the Radio

MTV, Kennedy and Me: Let's Begin to Heal 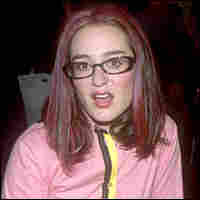 Like many nerds who came of age in the 1980s, I grew up on MTV. It was born on my ninth birthday — Aug. 1, 1981 — and my family got cable soon afterwards, which meant a steady diet of Duran Duran, Devo, The Eurythmics and other alternatives to exercise, the opposite sex and natural light.

It's a common lament among those in my generation that MTV doesn't show videos anymore, and that today's teenagers are robbed of the experience we grew up with, from the air of musical discovery to the sense of anything-goes rebellion to the towering hair. Many wonder whether kids growing up today will feel a connection to MTV the way we did, and the answer is: If it's been a part of their lives, they probably will. We feel nostalgia for pop culture because it was there when we were there, and that's about it.

Throughout its 25 years, MTV has left an indelible mark on tastes and culture. The Real World helped launch the phenomenon of reality television while teaching a generation about exhibitionism and eating disorders. The network helped ignite the careers of virtually every major pop singer to gain notoriety in the '80s and early '90s. It made household (or at least dorm-room) names of everyone from Nina Blackwood to Jesse Camp and beyond. For many years, it not only aired videos on its flagship channel, but also found room on its playlist for underground music — even clips by the unsigned, unknown likes of Dog Police.

In October 1993, when I was music director at the University of Wisconsin's then-microscopic student radio station, WLHA, MTV came to town as part of a tour of college campuses. During the four days it was in Madison, the network shot an episode of the alternative-music showcase Alternative Nation in WLHA's musty basement studios. So, on a Friday night, shortly before its nine billionth airing of some episode of Beavis and Butt-Head, I got to make my national television debut alongside spasmodically obnoxious MTV personality Kennedy.

Our exchanges — which spanned 90 minutes of programming but could be edited down to seven and a half harrowing minutes of footage — were, to put it diplomatically, awkward. Kennedy gabbled and shrieked and spouted inside jokes, while I wrung my hands nervously, smirked blandly and tried to keep up with Kennedy's patter. I was lost and terrified, of course, and it showed: I couldn't have been more flummoxed by her boilerplate questions ("What are the kids listening to these days?") if they'd been calculus equations posed in Sanskrit.

I would rather be stung by 10,000 hungry wasps than share this footage with the world — no streaming video for you, public! — but a few of the friends who have seen it have marveled at the way my conversation with Kennedy seems to take place not only in another era, but on another planet. There's a public-access feel, and this woman is rambling and tripping over her lines, and then this nervous fellow introduces an Aerosmith video for some reason, and who is that guy shrieking on the phone? This is MTV, the trendsetter and tastemaker, on its most cutting-edge show?

The fact that MTV would put a scrawny, flopsweat-soaked, 21-year-old college-radio music director on its airwaves for an hour and a half (not to mention the fact that it would employ Kennedy for years) might have been cause to question the network's judgment. But in many ways, the experience characterized what's so lovable and maddening about MTV at its best: It flies by the seat of its pants, tries new and often abrasive things, films nitwits riding skateboards off of rooftops, and even airs short film clips timed to songs by popular musicians. MTV may be struggling to re-establish its identity today, but as long as it remembers to risk looking foolish — and make eager 21-year-olds do the same — it'll be just fine.

MTV's VJs of Yore: Where Are They Now? 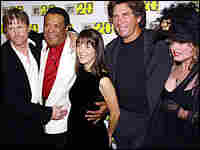 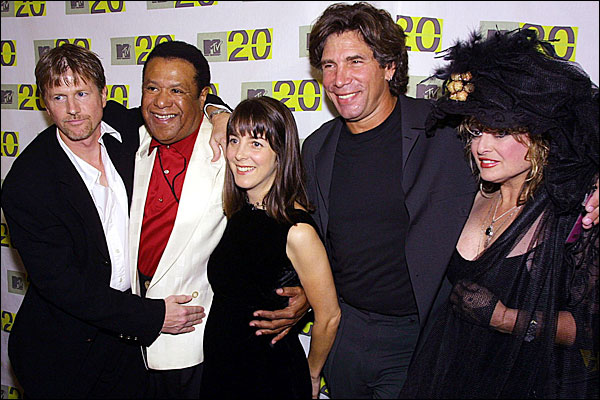 They helped to usher in the age of music videos, and then they moved on -- to radio, very often. Here are some updates on video jockeys from MTV's past, starting with the original five.

After leaving MTV in 1990, Quinn stayed in television, working as both actor and anchor. In 2005, she joined Sirius Satellite Radio, where she hosts a weekly show, Martha Quinn Presents: Gods of the Big '80s.

Jackson returned to radio in Los Angeles after his stint on MTV. He was host for a number of successful radio programs before he suffered a fatal heart attack in March 2004. He was 62.

Since his 1987 departure from MTV, Hunter formed a production company, Hunter Films, with his brother Hugh and co-founded the Sidewalk Moving Picture Festival in Birmingham. He is currently a host on Sirius Satellite Radio's 80s music channel.

Blackwood’s post-MTV career has included a number of acting roles, including a tour with the 2003 road company of The Vagina Monologues. Currently, she produces two syndicated radio programs -- Nina Blackwood’s Absolutely 80s and Nina Blackwood’s New Wave Nation -- and is a host on Sirius Satellite Radio.

After leaving MTV in the 80s, Mark Goodman went on to work at radio stations and made some television appearances. For a time, he was music supervisor on Desperate Housewives. He currently co-hosts Big 80s on Sirius Satellite Radio.

After spending the '90s at MTV, the snarky, bespectacled Kennedy hosted the game show Friend or Foe on the Game Show Network in 2002 and appeared as a commentator on VH1's Best Week Ever in 2004. Last year, she began hosting the Fox News Channel's Reality Remix.

Rolling Stone editor Kurt Loder joined MTV in 1988 as anchor for the channel's weekly news show The Week in Rock, and hosted several MTV news specials. He continues to supply the channel and MTV radio network with news and views. He also writes for MTVNews.com and has a movie review forum on the channel.

John Norris came to MTV in the late '80s as an alternate for Kurt Loder. He is currently a news correspondent based in New York, where he covers music, entertainment, pop culture, politics and social issues.

An MTV veejay from 1987 to 1994, Adam Curry went on to become a Web entrepreneur from the mid- to late-1990s, and later moved to the Netherlands to work on a morning show. He has since become a leader in podcasting.

Videos, Then and Now