Accessibility links
'Crazy' for a Summer Anthem Youth Radio's Anyi Howell would like to nominate a tune for the title "Song of the Summer": "Crazy," by Gnarls Barkley. It may not be the No. 1 hit, but it's the song that seems to be everywhere right now.

Listen
'Crazy' for a Summer Anthem

Youth Radio's Anyi Howell would like to nominate a tune for the title "Song of the Summer": "Crazy," by Gnarls Barkley. It may not be the No. 1 hit, but it's the song that seems to be everywhere right now. 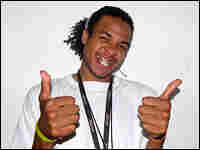 In the music industry, a lot of pop musicians who release a single after April 1st do so with the hope that their single will be the song of the summer. Now that's not necessarily the number one selling, chart topping hit, but the song of the summer is the tune that seems to be everywhere when the weather's hot. It flows out of car windows and leaks out of ear buds. It's on the radio when the teenagers wash your car at the gas station.

This year, Nellie Furtado and Shakira have both made good runs at having the song of the summer, but Youth's Radio's Anyi Howell would like to nominate another hit, Crazy by Gnarls Barkley.

Mr. GNARLS BARKLEY (Musician): (Singing) I remember when, I remember, I remember when I lost my mind. There was something so present about that day. Even your emotions had an echo and so much space.

Every few years a song comes along that mixes genres and influences so well that everyone from young club hoppers to the square soccer moms will crank it up a notch. In 2003, it was Outcast's Hey Ya. This summer, that hit is Crazy by Gnarls Barkley.

HOWELL: Crazy fills a void for music listeners by deviating from the same old stale pop formulas. It has the heart-wrenching vocals of soul, the kicks of hip-hop and the up-beat strings and guitar samples of a movie score. Because of all these influences, Crazy is getting airplay almost all over the radio dial, making it the most inescapable jam this season. The song's sound is so unique that my friend, Pendarvis Harshaw(ph), can't quite wrap his mind around it.

Mr. PENDARVIS HARSHAW (Berkley resident): Alternative, that's the word. Kind of out there kind of there really stream leftist. It sounds like the music video would be on some field of tall grass, a whole bunch of flowers kind of falling back into it.

HOWELL: Actually the video features singing inkblots. You know, the kind they show you at the psychiatrist's office to find out if you're bonkers. Karim Ablancho(ph) says the song makes her feel a little less looney.

Ms. KARIM ABLANCHO: People do call me crazy. The part that I like the most is when they say it's not that I know too little, it's that I know too much. I mean when I heard it, I was like, oh snaps, I can listen to this.

HOWELL: Like Karim, I could definitely related to being labeled eccentric by my friends and co-workers. But the majority of those people consider me to be pretty musically talented, too. For artists, the two often go hand in hand, like Nirvana's Kurt Cobain or Outcast's Andre 3000. The same creativity that makes good music can also be the reason people label you in insane. My roommate Karim Shandly(ph) doesn't see himself as a mad musician, but I still him singing him in the shower.

Mr. BARKLEY: (Singing) Is it so coincidence I've come.

HOWELL: A lot of industry insiders seem to think it's career suicide for musicians to step out of a specific genre, but with the Gnarls Barkley single spinning on all kinds of radio stations, the prospect of taking a chance and producing outside the box doesn't seem quite so crazy anymore.

NORRIS: Anyi Howell with his nomination for song of the summer. It's Crazy by Gnarls Barkley. This piece was produced by Youth Radio.