Accessibility links
Senate Considers Minimum-Wage Rise, Estate Tax Cut This week the Senate is debating whether to pass a bill that would both raise the minimum wage for the first time in almost a decade, and permanently cut the estate tax. It's a compromise that would give both Democrats and Republicans something each side wants. The House has already passed the bill. Don Gonyea talks to David Wessel of The Wall Street Journal.

This week the Senate is debating whether to pass a bill that would both raise the minimum wage for the first time in almost a decade, and permanently cut the estate tax. It's a compromise that would give both Democrats and Republicans something each side wants. The House has already passed the bill. Don Gonyea talks to David Wessel of The Wall Street Journal.

In today's business, the debate over the minimum wage.

GONYEA: The Senate this week will consider a bill that is aimed at helping some of the lowest-paid Americans, and some of the richest. It would increase the minimum wage for the first time since 1997, and cut the estate tax. The House has already passed the package.

David Wessel, deputy Washington bureau chief of the Wall Street Journal, joins us to explain both the substance and the politics. Good morning.

GONYEA: So how did the estate tax and the minimum wage increase get married in this same bill?

Mr. WESSEL: The only way that the Republicans could hope to get the estate tax through the Senate - where they need a couple more Democrats to reach the 60-vote majority you need to get anything done in the Senate - was to package it with something that Democrats love, and that's the minimum wage increase.

On the other hand, there was no way to get a minimum wage increase through the House - where some Republican moderates really wanted to get it done - without giving the conservative Republicans some red meat. And the estate tax cut does that.

GONYEA: Let's break it down. What's the economic argument for raising the minimum wage?

Mr. WESSEL: The minimum wage is $5.15 an hour. It's been there since 1997, even though consumer prices have gone up about 25 percent since then. This bill would raise it over three years to $7.25 an hour. And the argument is that the lowest-paid workers in America have been left out of the recent economic expansion, and only by the government raising the floor will they be able to benefit.

GONYEA: And the argument against it?

Mr. WESSEL: Well, the argument against it is the classic economic argument. Conservatives and many labor economists and former Federal Reserve Chairman Alan Greenspan - among others - have said if you raise the minimum wage, you're just creating more unemployment.

GONYEA: Okay. Let's switch to the estate tax. A stand-alone version of the estate tax bill failed in the Senate just two weeks ago. Does it look like the votes are there to get it done this time?

Mr. WESSEL: It's too early to say. The problem here is the estate tax is a ticking time bomb. Under the Bush tax cuts that were passed at the beginning of his administration, the estate tax comes back to pre-George Bush levels in 2011 unless something is done. The Republicans really want to get something done this year, because they're not confident they'll have as big a majority when they come back to Congress after the November elections.

The question is have they put enough goodies in? The minimum wage, some money for abandoned mines in order to buy just a couple of Democratic senators and get over the 60-vote hump. It's just too early to tell.

GONYEA: If it passes in its current form here, who would be the big winners, economically? It's not a full repeal of the estate tax.

Mr. WESSEL: No. As you know, the Republicans had hoped to repeal the estate tax permanently once and for all, but there's no way that's going to get through Congress. So this is a compromise, which would limit its impact really to the very richest Americans.

Interestingly, though, the way the thing is structured is the super rich - anybody who leaves over $25 million - faces a 30 percent tax rate. The people who get off well are the not-quite-so rich - people who just have a few million dollars. They get a lower tax rate, or exempt altogether.

Mr. WESSEL: Right. Well, you know, the estate tax has become a populist issue, which is an amazing fact given how few people pay it. Family farms and small business are always the preferred slogan: who wants to defend plutocrats? In fact, many family farms and small businesses are much too small to be covered by the estate tax, and even those that are a little bigger usually have found some way around it. So it's really not about those people, despite the argument.

GONYEA: David Wessel is deputy Washington Bureau chief of the Wall Street Journal. Thanks for being here.

GONYEA: You can learn more about how the minimum wage works and about who benefits when it goes up at npr.org.

A Primer on the Federal Minimum Wage 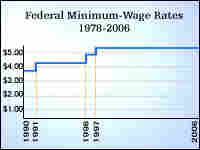 The current minimum-wage rate of $5.15 — increased from $4.75 in 1997 — has remained static for almost a decade. Jeremy VanderKnyff,NPR/U.S. Department of Labor hide caption 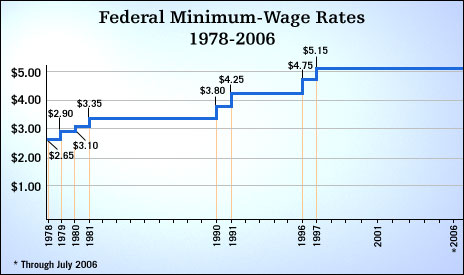 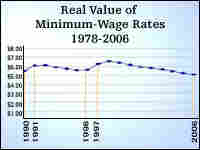 Since the last federal increase in September 1997, the purchasing power of the minimum wage — after accounting for inflation — has deteriorated by 20 percent. Jeremy VanderKnyff,NPR/Economic Policy Institute hide caption 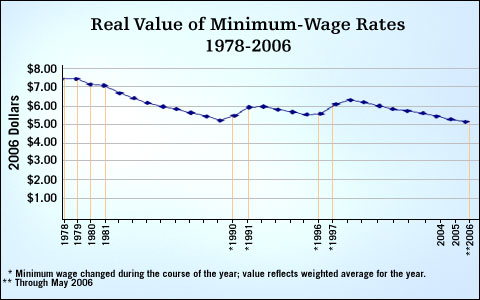 Since the last federal increase in September 1997, the purchasing power of the minimum wage — after accounting for inflation — has deteriorated by 20 percent.

The minimum wage is of maximum importance when it comes to welfare reform and poverty reduction. Learn more about how the value of an honest day's work is measured in the United States.

What is the minimum wage?

The federal minimum wage is $5.15 per hour for covered nonexempt employees. The Fair Labor Standard Act spells out who is and isn't exempt from the minimum-wage requirement.

Minimum-wage exceptions apply to workers with disabilities, full-time students, employees who receive tips, student-learners, and people younger than 20 during the first 90 days of their employment.

What about workers who receive tips?

Employers are required to pay their tipped employees $2.13 per hour in direct wages, if the following three conditions are met:

*The amount plus tips received equals the federal minimum wage or more.

*The employee keeps the tips.

*The employee regularly gets more than $30 a month in tips.

If an employee's tips plus direct wages do not equal the federal minimum hourly wage, the employer must make up the difference.

How often does the federal minimum wage increase?

The minimum wage does not increase automatically. In order to raise the minimum wage, Congress must pass a bill which the president signs into law.

Why has a federally mandated minimum-wage increase taken so long?

Congress has been slow to raise the minimum wage because many business groups are opposed, and many economists believe that increasing the wage will cause some jobs to disappear. The mainstream view is that increases in the minimum wage come with a price: fewer minimum-wage jobs.

How are states handling minimum-wage rates?

Across the country, states are debating minimum-wage rates. Many are raising the minimum wage through legislative action and ballot initiative. So far, 28 states and the District of Columbia have enacted minimum wages greater than those put in place at the federal level.

Since the last federal increase in September 1997, from $4.75 to $5.15, the purchasing power of the minimum wage — after accounting for inflation — has deteriorated by 20 percent. Adjusted for inflation, the value of the minimum wage is at its lowest since 1955. This year, state legislatures in Arkansas, Maryland, Michigan, North Carolina, and Pennsylvania raised their minimum wages above the federal level for the first time. Maine, Delaware, and Rhode Island — all states with minimum rates already above the federal level — passed additional increases this year.

Who benefits from the proposed minimum wage hike?

Eleven percent of the work force, or an estimated 14.9 million workers, would receive an increase in their hourly wages if the minimum-wage rate were raised from $5.15 to $7.25 by 2008.

Among workers likely to benefit from the wage increase, 59 percent are women. Nine percent are single parents.

Who would be negatively impacted by the proposed wage increase?

Some low-skilled workers would likely see their jobs disappear. And there is another group that's hard to pinpoint: jobs that would have been created at $5.15, but won't be created at $7.25.

Whether the missing jobs disappear or never get created, it's primarily younger workers who are affected. Teenagers, dropouts and workers who only have a high school diploma — anyone who doesn't bring at least some specialized skills to the workplace could be hurt. Of course, they could also be helped. That's why an increase in the minimum wage is controversial.