Accessibility links
To Air Is Human, To Rock Out, Divine New York Times writer Dan Crane talks about his book, To Air is Human, his stage name, Björn Türoque, and how he relinquished his guitar to become the second greatest air guitarist in the nation.

Listen
To Air Is Human, To Rock Out, Divine

New York Times writer Dan Crane talks about his book, To Air is Human, his stage name, Björn Türoque, and how he relinquished his guitar to become the second greatest air guitarist in the nation.

Excerpt: 'To Air Is Human' 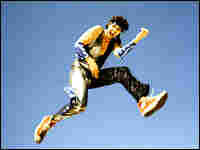 A friend of mine in LA has invited me to join twenty or so musicians for a Neil Young tribute concert, part of a series of fund-raisers for Theatricum Botanicum, a cool outdoor theater tucked in the hills of Topanga on the outskirts of Los Angeles. Well- established local musicians and a few bigger names like folksinger Michelle Shocked and seventies folk icon Jackson Browne will be participating. I feel vaguely intimidated by the prospect of performing on the same stage as Mr. Running on Empty, in a tribute to someone as formidable as Neil Young. But, then again, I have shared the stage with the greatest air guitarists in the world.

The night of the concert, I show up at sound check with my iPod and my air guitar. Most everyone else has brought an acoustic guitar, mandolin, or banjo, and a large dose of sincerity. There is an old Wurlitzer electric piano waiting to be played. Backstage, amidst some of LA's finest musicians, I load up on complimentary wine and stumble upon the set order tacked to the wall. This must be some kind of mistake, I think. Apparently, I am to close the show.

One by one the performers are called onstage to do a sound check. They tune up, adjust the balances between their various instruments, swap out bad cables, and ask the soundman for more vocals in the monitor. (As usual, vocalists can never have enough of themselves in the monitor.) I am blown away by a few of the players, particularly Jackson Browne, and this is only the sound check. Since I am last in the set, I am last to test out my gear. I walk on stage, plug in my iPod, and let a few seconds of my song erupt over the speakers. It's loud. Embarrassing. There are drums and distorted guitars -- a stark contrast to the mellow unplugged vibe I was getting from the other players. I quickly stop the iPod and lower my forehead in to my hand. This will be a complete disaster.

A few performers later, a surprisingly well-aged Jackson Browne, wearing the classic blazer, T-shirt, jeans, and blindingly white sneakers of every man over fifty who still wants to be cool but who will no longer endure the torture of shoes that lack at least an inch of foam cushioning, plays his version of "Only Love Can Break Your Heart." It's mesmerizing, and I stand there biting my nails, thinking, Wow -- that guy really sounds like Jackson Browne.

Michelle Shocked has the entire audience join her in a version of "Helpless," and that's about how I am starting to feel backstage as I pace around, nervous as hell. I've only played air guitar for people who were expecting air guitar. I feel way out of my league. Can I go home instead?

Nope. It's time for the finale -- time to coax Björn Türoque, my air guitar alter ego, out of hiding. I run out onstage, approach the mike cautiously, and announce, "Okay, people, it's time to get stupid." My hands are shaking as I grab the microphone to steady myself. I practiced by singing along in the car on the way here, but I somehow feel ill prepared for this.

I can hear murmuring among the crowd.

"This song requires a little setup..." I continue. "In the past few years, I've somehow gotten mixed up in the crazy world of competitive air guitar." The audience, thankfully, seems to find this funny.

"As those of you who have attended an air guitar competition know, it's a tradition for every competition to end with this song, which you will hear shortly. All air guitarists are asked to get up onstage and play this song together."

Laughter is erupting throughout the outdoor venue. They actually seem to be in the mood for a little comic relief after all the solemnity.

"In Finland, where the Air Guitar World Championships are held, it is said that if everyone in the world were to hold an air guitar instead of a gun, there would be no war."

I wish I could make that up.

"This is my own cover of the song, which I recorded, so it is in fact me playing the instruments, and I will be singing; but in the spirit of world peace, I'll be playing air guitar for to night's performance."

I pick up my iPod off the floor of the stage and hit play.

Then I strap on my air guitar, walk up to the microphone, and rock the hell out of "Rockin' in the Free World." The audience is laughing and clapping to the beat. The second I start singing, they are mine completely. By the time I get to the scorching guitar solo (which I recorded using a guitar filter called, appropriately, "Scorching Guitar Solo"), people are completely freaking out. I run back to the mike to finish the last chorus, and everyone is singing along. I wish I could get them all onstage with me so that we could play air guitar together.

With my last chord, they offer an extended round of wild applause. I take a bow, grab my iPod, and walk off, not knowing exactly what just happened.

"That was awesome!" says my friend Mike, another performer that night, who gives me a double high five when I arrive backstage. It feels like what a great performance should feel like. I'm actually shaking a little, overwhelmed by it all. "Dude, Jackson really dug it!" Mike whispers to me, laughing slightly and pointing to Jackson Browne, who looks over and smiles as if to say, "You're insane -- but nice work, kid."

Later, as I am leaving the theater, I hear someone shout, "There goes the air guitar guy!" The stranger comes over to shake my hand in the manner of an adoring fan. "Oh my god -- you rocked, dude! That was amazing!" he says. I say thanks and then walk away.

"The Air Guitar Guy" had a nice ring to it. 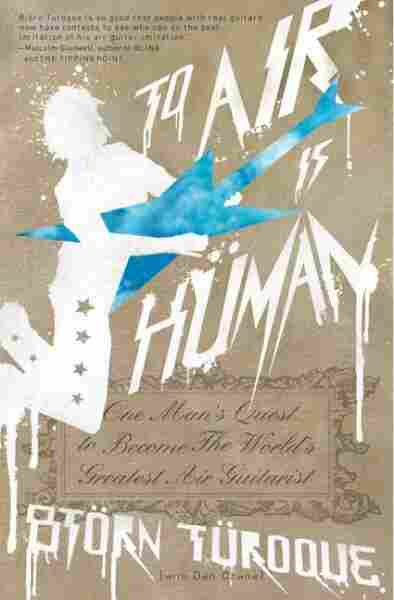 To Air Is Human

One Man's Quest to Become the World's Greatest Air Guitarist

by Bjorn Turoque and Dan Crane