Accessibility links
Taiwan Election May Bring New Ties with China If leading contender Ma Ying-Jeou is elected Taiwan's president in 2008, he will share one policy goal with Beijing: opposition to current efforts to move Taiwan toward independence.

If leading contender Ma Ying-Jeou is elected Taiwan's president in 2008, he will share one policy goal with Beijing: opposition to current efforts to move Taiwan toward independence. 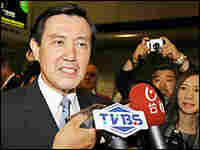 The government of Taiwan is in disarray after a series of corruption scandals. That puts Taiwan's Nationalist Party in a good position to take back political power in the 2008 presidential election. The party's charismatic leader says if he's elected, he'll try to sign a peace treaty to diffuse tensions between Taiwan and mainland China. That was last attempted in 1992. Taiwan and mainland China have been hostile to each other since the end of the Chinese civil war a half century ago.

ANTHONY KUHN: Many Taiwanese now expect President Chen Shui-bian to serve out his remaining two years in office as a lame duck. His wife, son-in-law and close adviser have been implicated in corruption scandals. His approval rating is at 20 percent or less. That's made opposition leader Ma Ying-Jeou the leading contender in the next presidential election.

Ma is chairman of the Nationalist Party, known in Chinese as the Kuomintang, or KMT. He's also mayor of the capital, Taipei. But in an interview at city hall, Ma carefully points out that just because the ruling party is in chaos doesn't mean the opposition automatically has its act together.

MA YING: We have lost the presidential election twice in the last six years. Are we ready to come back to power? Are we ready to let people understand and give back their trust to us? This is something that we have to be very, very careful. Otherwise, two years from now we could still remain as the opposition party.

KUHN: The KMT ruled mainland China for 21 years and Taiwan for 55 years as a one party dictatorship. It picked up some bad habits along the way, such as political violence, corruption and vote buying. Ma has brought fresh blood to the KMT since becoming chairman last year. With a doctorate in law from Harvard, he's as articulate as a scholar. He has a squeaky clean political reputation and the photogenic appeal of a matinee idol. If elected president, Ma says, one of his first priorities would be improving ties with mainland China. Ma says his party sees the mainland as a threat but also as an opportunity.

YING: The security problem is always in our mind. When there's more than 800 missiles - short and mid-range missiles - targeted against Taiwan, we certainly want to have better security relationship with the mainland.

YING: So we would like to reach a peace agreement with the mainland with the duration of 30 to 50 years, and included in it the military - what we call confidence building measures - so that the state of hostilities could be terminated.

KUHN: In other words, Ma would put off the question of reunification or independence for at least a few decades. That, Ma points out, is what polls show the majority of Taiwanese want. Ma says he'd also work to build stronger economic and educational ties with the mainland. He says he's encouraged to see that Beijing has gotten better at courting public opinion in Taiwan.

YING: I think they've become much more sophisticated and become more cautious in flexing their muscles.

KUHN: A decade ago, Beijing lobbed missiles towards Taiwan in a ham-fisted attempt to intimidate the island's voters. It backfired. Pro-independence President Lee Teng-hui was elected, and the U.S. sent aircraft carriers to the region as a warning to Beijing. This year, when President Chen abolished a government body in charge of reunification matters, Beijing largely held its tongue and instead got the U.S. to dissuade Chen from making any rash moves.

YING: Now they know the shortest distance between Beijing and Taipei is through Washington.

KUHN: Some Taiwanese right-wingers see Ma as possible turncoat who might sell out Taiwan to the Communists. And some China skeptics in Washington wonder if Ma makes nice with Beijing, would the U.S. lose an ally that could help check China's growing military power. Ma says no.

KUHN: Preserving the status quo, as Ma promises to do, means that Taiwan must continue to rely on U.S. military protection. But any progress in easing tensions across the Taiwan straits would mean one less security flashpoint for the U.S. to worry about.