Accessibility links
An Unexpected Delight: Fried Olives in Italy Olive Ascolana is a culinary signature of Le Marche, a region of Italy that lies between the Apennine Mountains and the Adriatic Sea. Writer Afi-Odelia E. Scruggs learned how to make the meat-stuffed, nutmeg-scented treats during a recent trip to Italy. 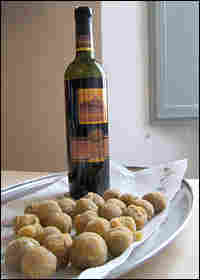 Olive Ascolana is a culinary signature of Le Marche, a region that lies between the Apennine Mountains and the Adriatic Sea. Scroll down for recipe. Anna Youngquist hide caption 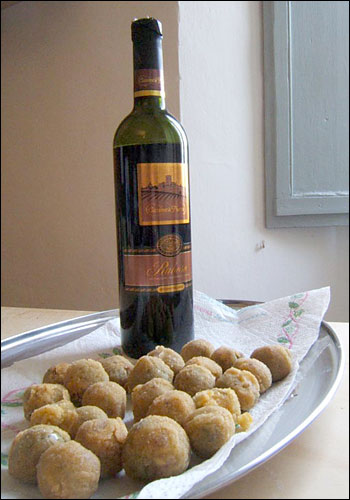 Olive Ascolana is a culinary signature of Le Marche, a region that lies between the Apennine Mountains and the Adriatic Sea. Scroll down for recipe. 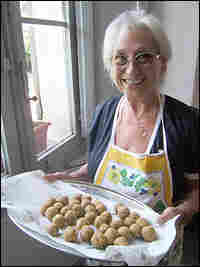 Afi-Odelia E. Scruggs is a freelance journalist who lives near Cleveland.

Before a recent trip to Italy, it had never occurred to me to stuff an olive with meat.

After my first night in Cagli, however, it seemed like a reasonable thing to do.

Cagli is about four hours northeast of Rome, in Italy's eastern Le Marche -- a region that lies between the Apennine Mountains and the Adriatic Sea. I was in town to teach journalism to American students, and went out for dinner with a group of colleagues.

When I saw the bowl of olives the waitress brought, I knew I wasn't in Cleveland anymore. The olives were covered in a golden, crunchy breading. A bite revealed a stuffing of ground meat and released the smell of nutmeg.

Olive Ascolana is a culinary signature of Le Marche. The dish originated in Ascoli-Piceno, a town in the southern part of the region, and spread north.

These olives became the favorite appetizer for many of the 33 students enrolled in the journalism program. When a program coordinator scheduled a demonstration of how to make the dish, we quickly signed up.

Our teacher, Loretta Lacche, didn't speak much English, but our translator Donna Galletta was an expatriate American who had run several restaurants before becoming an interpreter. Lacche is a retired second-grade teacher, accustomed to teaching beginners. She told us, through Galletta, that she would speak slowly and take her time.

We knew the dish was complex; it couldn't be easy to stuff meat into an olive.

We'd speculated on the process every time we ordered the appetizer. I'd decided the cook split the olive along one side, removed the pit and replaced it with meat. Other students guessed that pre-pitted olives were used. We were all wrong.

Lacche pitted the olive by using the same principle you'd use to peel an apple or an orange. As you would cut the peel off an apple in a single spiral, so, too, do you cut the olive from the pit.

Without its pit, the olive coiled into a spiral. Lacche took a pinch of the stuffing and rolled it between her fingers. She reshaped the olive around the stuffing, so the fruit regained its original shape. Then she breaded it in flour, eggs and breadcrumbs.

"If these cost a lot in a restaurant, now you know why," Galletta said.

Because olives Ascolana take so much time to prepare, they're featured at festive, special occasions, such as Christmas and Easter. Maybe one particularly ambitious person could make a batch, but Lacche's way sounded like more fun.

"The women of the family get together to make the olives and talk and reminisce," she said. "Only the women."

Although we had one male student in our group, we turned our lesson into the kind of cooking party Lacche described. We quickly discovered our skills. One of the students was a whiz at pitting. Another stuffed the fruits with admirable efficiency. A third person breaded the olives. We became an assembly line.

When we ate the olives, we didn't pop them into our mouths. We bit into them slowly, enjoying the breading, the olive and the stuffing in turn. We sipped our wine and reached for another olive.

"Next time you order these in a restaurant, you'll appreciate them," Galletta said.

But Sara Danielson, one of the students, didn't need to wait. "I appreciate them now," she said.

Get more recipe ideas from the Kitchen Windows archive. 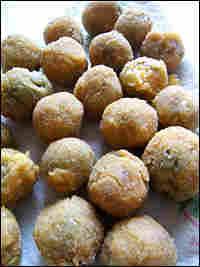 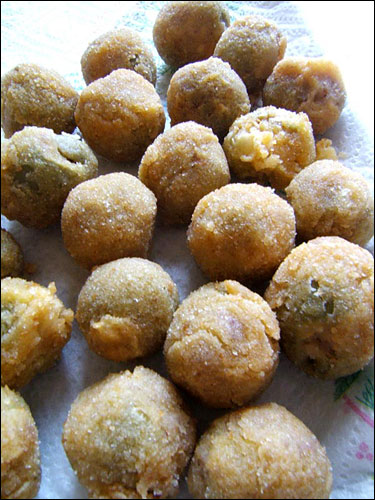 Nutmeg to taste (start with 1/2 teaspoon)

3 beaten eggs (use one for making the filling; use two for breading the olives)

Drain the brine from the olives. Place them in a bowl and cover with lukewarm water. Let them soak while preparing the filling.

Mix the meats together. In a large saucepan, melt butter and saute meats and nutmeg over low-to-medium heat until the meat is no longer pink. Add the grated Parmesan cheese and one beaten egg. Cook, stirring until the meat mixture is dry. Set aside to cool.

Drain the water from the olives and pat dry. Starting from the end without the hole, cut the olive away from the pit in a spiral, as if you're peeling an apple. The olive will coil. Place the olive meat in a bowl.

Pinch a bit of the meat mixture between your thumb and forefinger and roll into a small ball. Shape the olive meat around the filling, so the fruit regains its original shape. Set aside on a cookie sheet or on a shallow pan.

Dredge the olives lightly in flour. Pour the other two beaten eggs into a shallow bowl. Place the stuffed olives -- a few at a time -- into the bowl and spoon the egg over them. Remove olives from the egg, roll them in the breadcrumbs, then repeat the process. The breading should be thick. Set aside, and bread the remaining olives.

Pour the olive oil into a medium-sized frying pan and heat until the oil is bubbling. Fry the olives until the breading is golden brown. Remove with a slotted spoon and drain. Serve the olives while warm.