Accessibility links
Sept. 11 Conspiracy Belief Draws Attention to Teacher University of Wisconsin officials will review the teaching of an instructor who believes that the terrorist attacks of Sept. 11 were orchestrated by the U.S. government. The move follows calls from state legislators to fire the professor. Wisconsin Public Radio's Brian Bull reports.

University of Wisconsin officials will review the teaching of an instructor who believes that the terrorist attacks of Sept. 11 were orchestrated by the U.S. government. The move follows calls from state legislators to fire the professor. Wisconsin Public Radio's Brian Bull reports. 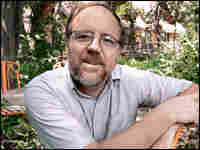 Kevin Barrett, a lecturer at the University of Wisconsin, is making national headlines for his views that the Sept. 11 attacks were carried out by the U.S. government. Mike DeVries/The Capital Times hide caption

A University of Wisconsin instructor has sparked a debate over academic freedoms.

Part-time lecturer Kevin Barrett charges the U.S. government with a cover-up, saying it planned and carried out the 9/11 terrorist attacks. His conspiracy theories have angered many state lawmakers who are calling for him to be fired. Wisconsin Public Radio's Brian Bull reports.

Kevin Barrett is a Muslim and an untenured folklore scholar who earns about $8,000 for teaching a course on Islam. He was just another conspiracy theorist until speaking out recently on a Milwaukee Radio talk show, accusing the White House of staging 9/11.

Mr. KEVIN BARRETT (Folklore Scholar, University of Wisconsin): You look at who actually signed onto that project for a new American century memo calling for a new Pearl Harbor one year before we got one. You got Dick Cheney, Richard Perle, Paul Wolfowitz - that is, this cabal of neo-conservatives…

BULL: On campus, Barrett says he keeps those views to himself. Off campus, he maintains that the World Trade Center towers were a controlled demolition -that Washington's air defenses were shut down to leave the Pentagon vulnerable, and other claims.

Mr. BARRETT: Flight plans of the two airplanes that hit the towers appear to have been on a course toward building seven, as if this building was broadcasting a homing signal.

Mr. BARRETT: I'm really pleased to be here today with all of you in…

Barrett wasn't so warmly received recently when he appeared on FOX News' Hannity and Colmes program.

Mr. SEAN HANNITY (Anchor, FOX News): The issue is whether or not…

Mr. BARRETT: Well, it's a question of science.

Mr. HANNITY: …you, it's whether or not you, with your bizarre theories, are the best…

Mr. BARRETT: I think you have the bizarre theories.

Mr. HANNITY: …the most competent…

Mr. HANNITY: Hang on a second.

Mr. BARRETT: …guys with box cutters led by a…

Mr. HANNITY: And you're a very angry man.

Mr. BARRETT: …guy on dialysis in a cave in Afghanistan. That's ridiculous.

Mr. BARRETT: I mean, that's the craziest conspiracy theory of all of them.

BULL: Kevin Barrett says he gets a lot of supportive e-mails, along with a smattering of death threats. He's also the focus of a petition signed by 61 lawmakers who want the University of Wisconsin to fire him.

State Senator NEAL KEDZIE (Republican, Wisconsin): The UW system has an obligation to teach courses based in fact, not for the sake of calling it unconventional because it's unfounded theories. This undermines their credibility.

BULL: Kedzie is a graduate of UW-Whitewater, which last year hosted Ward Churchill, the University of Colorado professor who compared World Trade Center victims to Nazis. Churchill was fired, and is suing to get his job back.

University of Wisconsin Provost Pat Farrell conducted an investigation of Barrett, and determined that his views were not grounds for dismissal.

Ms. ADRIANE CHRISTENSEN(ph) (McAllister College, St. Paul): What you have here is a kind of circus, where everyone of the participants benefits from the flapdoodle.

BULL: Adriane Christensen of McAllister College in St. Paul says the clamor over Barrett only publicizes his conspiracy theory while giving lawmakers a chance to air their grievances.

Ms. CHRISTENSEN: The University of Wisconsin probably comes out looking worse in this whole situation, but I think they did the right thing in continuing his contract so that they don't continue to make him a sacrificial lamb for free speech advocates.

BULL: The university stands behind Kevin Barrett for now, but that support may be tested again this fall. Barrett plans to teach a course outside of the university, focusing exclusively on his 9/11 conspiracy theories.