Accessibility links
Touring the World, but Always Lost Shedding the prickly remoteness that has made him an acquired taste, Eric Bachmann crafts a collection that pairs his gruff, world-weary lyrics with a newfound approachability. That's not to suggest, however, that Bachmann has lost his gift for grimness.

Touring the World, but Always Lost

Touring the World, but Always Lost 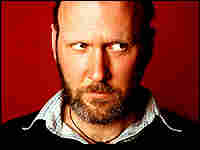 Eric Bachmann wrote his new album while living in the back of his van. hide caption

Throughout his career, the work of singer-songwriter Eric Bachmann hasn't exactly radiated warmth, whether he was unfurling surly screeds as lead singer of Archers of Loaf or re-creating himself as a crooning indie-rock Neil Diamond with Crooked Fingers. It makes sense that Bachmann's remarkable new To the Races marks his first conventional album as a solo act: Shedding the prickly remoteness that has made him an acquired taste, he crafts a spare collection that pairs his gruff, world-weary lyrics with a newfound approachability.

That's not to suggest that Bachmann has lost his gift for grimness. On To the Races' glorious opener, "Man O' War," he tours ships, seas and ruins while pausing to impart a few fatalistic lessons: "Like the moon doesn't mind / if the sun doesn't shine / the sea doesn't care / if you're lonesome tonight." Accompanied by Miranda Brown's hauntingly lovely background vocal, Bachmann takes a sort of world tour of alienation, where land and sea are equally imposing.

Bachmann wrote the songs on To the Races while spending last summer living in his van — probably not a jarring lifestyle change for an indie-rock touring musician, but still — so it's no surprise that the album showcases an acute understanding of solitude, literal and otherwise. He may have all the freedom in the world, and write songs about sailing the high seas, but Bachmann also knows better than most what it's like to be lost wherever he goes.