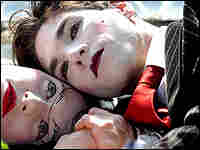 Best described as theatrical rock or punk cabaret, the music of the colorful Boston duo Dresden Dolls addresses identity crises, love and topics far more provocative. Since its debut, the band has toured with Nine Inch Nails while attracting a worldwide audience. Dresden Dolls' newest album, Yes, Virginia…, is cleaner and more mature than its self-titled predecessor, but the music remains theatrical, moody and invariably provocative.

Before forming Dresden Dolls, singer and pianist Amanda Palmer was a solo artist in the Boston area, while drummer Brian Vigilione was playing bass for another group. The two met in 2000 at a Halloween party where Palmer played some of her songs, and the two began working together shortly thereafter. Palmer, who learned piano by watching her mother play Bach and Debussy, has been writing songs since she was 9. Listening to Yes, Virginia…, it's immediately clear how far she's come since then.

Dragged from the Past, Kicking and Screaming July 18, 2006