Accessibility links
Admiring Oe's Talent for Discomfort Victor Lavalle, the author of slapboxing with jesus, says Kenzaburo Oe's novella "Prize Stock" explores themes of racism and brutality while avoiding simplistic escapes: "It's not a story about right or wrong, democracy versus anarchy, and you can't pick out the good guys." 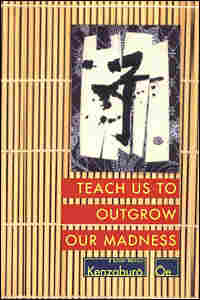 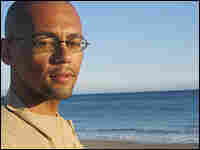 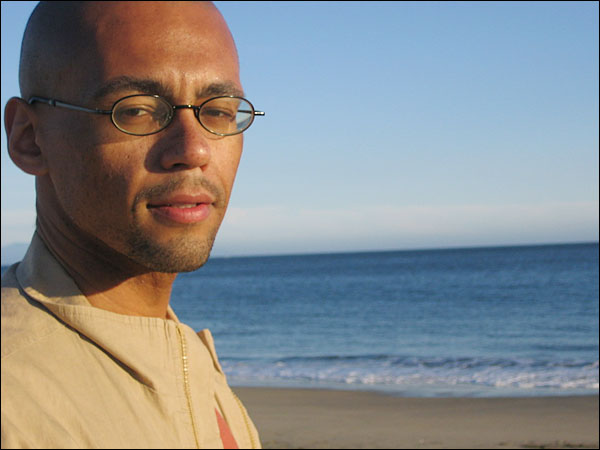 Victor LaValle is the author of slapboxing with jesus and The Ecstatic. He has been a finalist for the PEN/Faulkner Award and is a recipient of a Whiting Writer's Award. His work has appeared in GQ, The Fader and The Washington Post, among others. Currently, he is broke.

Browse Our Critics' Picks, Plus Get Excerpts

Kenzaburo Oe's 1958 novella "Prize Stock," collected in Teach Us to Outgrow Our Madness, chronicles how children in a rural Japanese village react to the detainment of a downed American airman in their midst.

The pilot is black, and as the title of the story infers, the children take at once a brutally condescending and proudly exoticized view of the soldier, thinking of him chiefly as a rare breed of livestock.

But the community of rural kids -- very much like the one that Oe himself grew up in -- gets riven by other tensions as well, including a jurisdictional dispute with a nearby town over where the soldier should be quartered. Things build to a tragic climax, which unlooses a bout of lethal violence. The young narrator, known only by his childhood nickname, Frog, realizes he is "no longer a child." The casual brutalities and hatreds of the adult world have become routine, if not any more sensible. NPR discussed Oe's novella with Victor Lavalle, author of the story collection slapboxing with jesus.

Q. Is "Prize Stock" intended as any sort of commentary on the power of American racism, showing how it -- like pop music and baseball -- proved a ready import in the wake of Japan's defeat in World War II?

Before getting into the particular racial issues at work in "Prize Stock," I think it's worth pointing out that for me, Oe's story is a particularly good example of what some people call "fantastic fiction." Despite its realistic setting and wealth of naturalistic detail, the entire story is built on an utterly unrealistic premise: There were no black airmen flying in the Pacific Theater during World War II. The famous Tuskegee Airmen only flew in Europe.

Why does this matter? Because the presence of a black airman would've forced Japanese readers to reconsider this as a straightforward story. It would've signaled that they were about to read something quite atypical, and I think this fact should send the same message to readers here as well. It forces a reader to re-examine reality, which is the great power of "fantastic fiction."

Q. OK, so beyond the premise, what are the things that make this story atypical?

Well, first, at the time when Oe wrote this story, in 1958, he was also writing, self-consciously, against an influential new movement of urban Japanese writers, who regarded any rural background as shameful and stupid. Of course that's exactly where Kenzaburo Oe came from. He'd been raised on the island of Shikoku, in a village a lot like the one in this story. I think it's fair to say that at the time Oe sat down to write this (he published it when he was 23) he'd already had a fair amount of experience with being on the losing end. (He'd also had to deal with the shame of speaking in a Shikoku dialect when he went to university in Tokyo). All of this, I think, is what helped him write "Prize Stock." I don't read it as a story about racial prejudice, but about the ways human beings abuse power.

Q. What about the frequent passages where the kids in the village liken the black soldier to an animal?

It's true that the story's description of the black soldier is animalistic until the end. But it isn't simply meant as proof of the villager's prejudice. Again, it's the context: Oe definitely used such similes and metaphors to signal the misjudgment between the Japanese villagers and the black soldier -- but he also used them because he knew his urban-reared literary peers never could. Rather than be ashamed of his knowledge about the natural world, Oe used this story to advertise it. He knew that many of his peers had no idea how animals smelled or crops grew, the closest they'd come to a forest was the park down the street.

In other words, he used a story about powerlessness to empower himself. I don't know that this makes it any easier to gloss over the descriptions of the black airman -- in fact, it shouldn't -- but it does clarify the multiple uses Oe made of his language.

For instance, Oe does not use the language of revulsion only when it comes to the black airman. In fact, Frog and the rest of the villagers are completely loathsome to the residents of the nearby town. Frog says that the townspeople see the villagers as "dirty and smelly." They treat the villagers "like dirty animals." In return, the villagers hate the townspeople, who use their power (they buy the village's goods) to keep their rural counterparts in a constant state of subordination.

But it doesn't stop there. When the villagers go to town to ask what they should do with the black airman, the townspeople aren't in a position to make any such decision about a prisoner of war. Instead, word must be sent higher up, to the prefecture -- they will give the orders. In other words, none of them is actually powerful; each is just less powerless. It's into this context that the black airman falls, literally. Oe's story isn't out to simply criticize the abuse of power: That's easy. He's writing to confront the lamentable truth that each one of us abuses it eventually.

Q. It seems that Oe intends the end of the story, where Frog spits out the word "nigger" to characterize the soldier, to mark a rite of passage into adulthood, and adult-style hatred. Does that mean that he's depicting this reflexive bigotry as something pretty much inevitable in the formation of people's character?

A. I actually find the ending to be a display of Frog's enduring ignorance rather than the start of it. By the end of the story, he does call the black airman a nigger and this signals a turn toward a new ugliness, a loss of certain innocence.

But I think that if you look back on the childhood Frog has described, it was already steeped in power and ugliness. Certainly the young girls whom Harelip terrorizes at the bathing pond wouldn't call their circumstances innocent. Frog treats his younger brother with a degree of detachment, and even cruelty, that mirrors his father's treatment of Frog. And let's not even mention the women of the village, who are faceless and certainly powerless, which like everything else in this story seems completely intentional on Oe's part. I guess I felt that Oe was illustrating, with that racial slur, Frog's movement into adulthood, but that the story as a whole had done quite a good job of patiently puncturing any sentimental picture of childhood. For instance, Oe makes it clear that the kids' view of the black airman is naive and even innocent, but he doesn't temper their ugliness ("He's like a person!") or absolve them of its taint.

Q. "Prize Stock" strikes me as a much more forthright account of how children absorb casual brutality than the junior-high warhorse on the same thing, William Golding's Lord of the Flies. Is the reason that kids are taught that rather tame treatment rather than this story because of Oe's candor about racial distrust, and use of racist language?

A. I think you're right about the Golding, particularly that the message there is about savagery rather than power, and I think that difference is why it's so palatable for our schools. In Lord of the Flies, it's the young or the fat or the good who are brutalized and these are appealing groups because everyone can agree (at least in a classroom) that no one should be mistreated because of how many snacks he ate. But Oe's story refuses these simplifications. It's not a story about right or wrong, democracy versus anarchy, and you can't pick out the good guys. This difference leads to the reasons why this story has mattered so much to me.

What I admire most about this story is Oe's willingness to be so damn exacting with his people and with himself. So many other writers of a similar background might've been content to write this story without the black airman and in this way ensure the righteous innocence of the oppressed. Whenever I reread this story, I try to imagine Oe going back to his village after the story was published (it won the Akutagawa Prize, a major award in Japan) and the members of his village saying, "You got those awful townspeople just right, but did you have to make us look so bad?"

In "Prize Stock," Oe refused to flatter himself, his village, his country, his kind (however you decide to take that) and this has made a lasting impression on me. In fact, it's become one of the fundamental tests I put to myself when I write. Whom are you flattering in this portrayal and why are you doing it? The answer is often pretty simple: I'm usually flattering myself, and it's because I want bookish women to fall in love with me.

But imagine if Oe's courageous nakedness were universal. Black writers might stop making careers out of self-righteousness and white prejudice. White guys might stop hiding behind their encyclopedic knowledge and grapple with their lack of humility. Immigrant writers might stop moaning about how hard it was for their parents to become Americans. White women might finally cut their poor mothers a little slack.

In place of these shopworn scenarios, what if white folks wrote honestly about white racism? (Because I could do with a lot less about white racism from everyone else.) Imagine black writers addressing black cruelty and sanctimoniousness, or Asian writers really coming to terms with Asian materialism.

Now, I understand, first, that none of these things are actually stories, they're only subject matter. Also, I really don't want to dictate what others should write -- the ideas above might only interest me. But what I am arguing for is discomfort. For writers to implicate themselves rather than everyone else. (And the self-distancing disclaimer that many writers favor today -- saying "I'm too ironic to be sincere" -- doesn't count here.) Kenzaburo Oe managed this kind of discomfort, but didn't sacrifice readability to accomplish it.

I feel so lucky to have encountered Oe's brilliant work because it saved me from mistaking the vapid absurdity of his chief rival in Japanese fiction, Haruki Murakami, for writing that risked real depth. Besides "Prize Stock," I'd also recommend his early short novel, A Personal Matter, though I wouldn't suggest much of his later fiction. 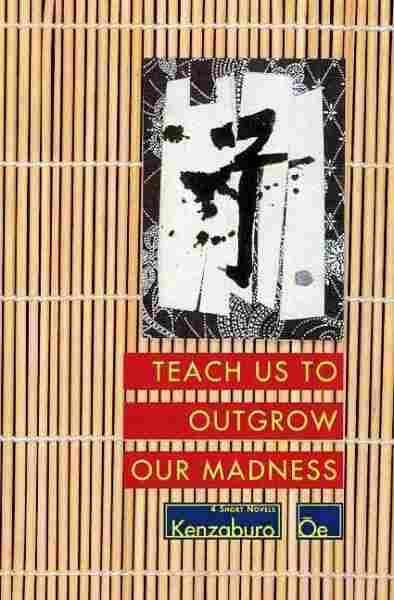 Teach Us to Outgrow Our Madness

Title
Teach Us to Outgrow Our Madness
Author
Kenzaburo Oe