Accessibility links
Call to Arms Is Heard in Post-Katrina Louisiana According to Louisiana state police, there has been a spike in the number of people applying for concealed weapons in the state. Classes for many gun-safety instructors have been near capacity levels this month.

Listen
Call to Arms Is Heard in Post-Katrina Louisiana

According to Louisiana state police, there has been a spike in the number of people applying for concealed weapons in the state. Classes for many gun-safety instructors have been near capacity levels this month. 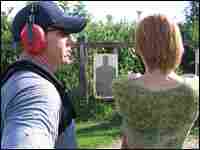 But long before this summer's crime wave, Louisiana was seeing an increase in the number of people applying for permits to carry concealed hand guns. Classes for many gun safety instructors are nearly full this month.

NPR's Audie Cornish visited one to find out why.

Mike Jarena's(ph) gun safety class for the Placaman's Parish Sheriff's Office is completely full for the third week in a row.

Mr. MIKE JARENA (Gun Safety Instructor): Thumb over thumb, everything that you've got aimed towards the target. None of this Angie Dickinson stuff.

CORNISH: The course is a requirement for those applying for the State of Louisiana's concealed handgun permit. Permit applications statewide are up 64 percent over the same six month period last year. And in parishes such as East Baton Rouge, Orleans and neighboring Jefferson Parish, the number of people seeking to carry concealed weapons this year has already surpassed last year's totals.

CORNISH: Jarena has seen his class size double and says the difference is clearly Hurricane Katrina.

Mr. JARENA: I think the biggest difference after Hurricane Katrina was it was a big wake-up call for a group of people who were always dependent on the local government to take care of them. Somebody would help them do this and someone would help them do that. And they went, there's nobody here helping us.

Mr. STEVE CANNILY(ph): And I'm Steve Cannily. Welcome to a brief look at the fundamentals of gun safety.

Mr. NICK CATRERA (New Orleans resident): My own gun will cause me more problems than they solve.

CORNISH: But you're still here because -

Mr. CATRERA: But I'm still here because it's my job to be responsible for two individuals, who are my children, and my wife. That's my job.

CORNISH: Hal Moser bought matching Kel-Tec .380 pistols for himself and his wife, Cheryl, this past weekend. Moser says when he rode out Hurricane Katrina in a New Orleans area hotel last summer, he learned a valuable lesson.

Mr. HAL MOSER (New Orleans resident): They looted my house. They looted my neighborhood. All these things added together, you know, there's a certain amount of lawlessness. It's under control much better now with the police department and the National Guard. But, you know, it still shows you have to take a lot of responsibility yourself.

CORNISH: He said the final straw came just weeks ago when someone tried to attack his wife on her early morning walk in their Gentily neighborhood. While several families have moved back to his street, Moser says areas just a block or two away feel barren.

Mr. MOSER: How would you feel if you were the only person back in your entire block or neighborhood and there's nobody around you? There's no neighbors, so you can't scream and yell for help if something happens. And just being in a safe neighborhood really helps, and if you have no neighborhood, it makes you feel a little apprehensive.

CORNISH: Terry Bracken(ph) is also here at the urging of her spouse. Her large designer handbag will be the new home of a Ladysmith revolver. Bracken says her husband carries a weapon so she never felt she needed one, until her return to her riverside home in Jefferson Parish nine months after the storm.

Ms. TERRY BRACKEN (New Orleans resident): When I was in Houston, I kept hearing that the bad element was gone. Well, when I come back, I don't think that's the case. Because they're crimes of opportunity, and I think people are taking these opportunities to prey on people that aren't expecting it to happen.

CORNISH: In New Orleans in particular, the murder rate reached pre-Katrina levels last month, despite the 300 National Guard patrolling the city, despite the fact the city's population has been cut in half.

Today, Louisiana Senator Mary Landrieu was calling on the U.S. Justice Department to lend some support to the city's overwhelmed criminal justice system.