Accessibility links
Soprano Schwarzkopf Dies at 90 The renowned soprano Elizabeth Schwarzkopf has died at the age of 90. Schwarzkopf was known for her shimmering "silvery" voice, and also for her membership in the Nazi party.

The renowned soprano Elizabeth Schwarzkopf has died at the age of 90. Schwarzkopf was known for her shimmering "silvery" voice, and also for her membership in the Nazi party. 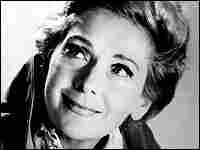 German soprano Elizabeth Schwarzkopf has died at her home in western Austria, according to Austrian state radio. She was 90 years old. No cause of death was given. With a shimmering voice and great physical beauty, Schwarzkopf was called one of the supreme singers of the 20th century. But she wasn't without controversy.

NPR's Tom Huizenga has this remembrance.

HUIZENGA: And second, her Nazi affiliations. In 1938, the 22-year-old Elizabeth Schwarzkopf applied to join the Nazi Party, just as her career began to blossom. After the war, she tried to lie about her party membership. Schwarzkopf biographer Alan Jefferson says she always had a stock answer ready whenever the Nazi question came up.

Mr. ALAN JEFFERSON (Schwarzkopf biographer): She said it was like joining a trade union. You've got to do it to get the work. Well, that was patently untrue because of the 108 members of the Berlin Philharmonic Orchestra, only eight were members of the party.

HUIZENGA: In those days, Elizabeth Schwarzkopf was a feisty young soprano with ambition to burn. She learned more quickly than most of her peers, which landed her better roles and ignited jealously. Schwarzkopf's career was solidly on the rise and so was the Nazi Party. Washington Post music critic Tim Page says he understands why Schwarzkopf stayed in Germany while so many of her colleagues fled.

Mr. TIM PAGE (Washington Post): Frankly, it takes a lot to just suddenly get up when you're young and starting your career and say, I no longer can approve of this country. I'm going to leave. Now, there's some people who did leave and they take on a certain moral greatness which I don't think anyone would attribute to Elizabeth Schwarzkopf.

HUIZENGA: But what almost every critic would attribute to Schwarzkopf is the beauty of her voice.

Mr. JEFFERSON: The voice itself was very silvery, a cliché expression, I know, but it was beautifully projected, beautifully graced and one could pick it out in the dark.

HUIZENGA: The voluptuous music of Richard Strauss became a Schwarzkopf specialty, as did the eccentric art songs of Hugo Wolf. In the late 1940s, few singers paid attention to Wolf, but Schwarzkopf's voice and personality were a perfect match for his intricate music.

HUIZENGA: Schwarzkopf revived Hugo Wolf's reputation, thanks in large part to Walter Legge, a Wolf fanatic and a shrewd record producer. He eventually became Schwarzkopf's husband and, some say, the man who manufactured her career.

Legge may have been her pilot, but Schwarzkopf knew exactly where she wanted to go. In the opera house she became a persuasive singer and actor. And, on the recital stage, singing German Leiter, she tapped into a special intimacy with her audiences.

HUIZENGA: Schwarzkopf has always had her detractors, though, who claim she was too much of a perfectionist, over-pronouncing the words. But Tim Page doesn't hear it that way.

Mr. PAGE: I always thought that you had the sense of a real singing actress with a great voice, but also with a great sense of drama, who was really milking every last little bit of what was in the music and, specifically, in the words.

HUIZENGA: After 41 years and over 1,800 performances, Schwarzkopf gave her final recital on March 19, 1979. Three days later, her husband, Walter Legge, died and Schwarzkopf moved to Switzerland. In her remaining years, she gave a few master classes, wrote a memoir of her husband and accepted the honor of Dame Commander of the British Empire. She even tried her hand at directing a production of Richard Strauss's Der Rosenkavalier, the opera that gave her her signature role of the Marshalin.

HUIZENGA: Elizabeth Schwarzkopf had a keen sense of her talent. She once gave Maria Callas an impromptu voice lesson in a busy restaurant. And when asked by the BBC to pick records to take to a desert island, seven out of the eight she chose were her own. That might sound egocentric, but Schwarzkopf said she just wanted to be able to relive her life through her recordings. And today, those recordings continue to be reissued, ensuring that Schwarzkopf's silvery tone shines well into the future.