Accessibility links
New Rubber Sidewalks Tested in 60 Cities Sixty cities in 15 states are taking a playground approach to sidewalk maintenance. They're testing rubber sidewalks as a way to avoid the costly repairs of concrete walks that have been broken up by tree roots. Officials say the rubber sidewalks as a win-win. But some residents aren't so sure. 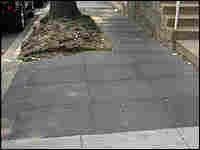 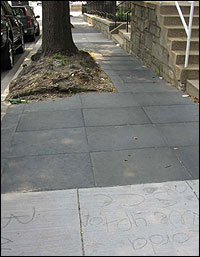 A dark gray rubber sidewalk meets a traditional concrete walk in Washington, D.C. Cities are experimenting with rubber to see if the bendable walks prevent the costly repairs from spreading tree roots.

Sidewalks have always been a place where city kids can play games. Children can draw with chalk, play hopscotch or jump rope. Now some sidewalks are starting to share even more with playgrounds. Cities are experimenting with the kind of rubber pavement that you often see under swings and slides.

The idea for a rubber sidewalk first came to Richard Valeriano in a dream. For two decades, Valeriano has worked as a street inspector in Santa Monica, Calif. Part of his job is to search for sidewalks broken up by tree roots. In the fall, he spends days driving around just looking at sidewalks. After one such day, he had a strange dream about floating, moving, animated sidewalks.

Valeriano and his supervisor laughed about the weird dream the next day and Valeriano forgot about it for years, until his health club was remodeled.

"They were putting in this sports flooring, which I noticed was made out of rubber," he says. "The light bulbs went off, of course, and I thought, ‘Wow, could this possibly work?’"

Valeriano wondered whether a rubber sidewalk might be less likely to crack. He asked a sports-flooring company to build prototypes and Santa Monica began testing them. But the idea didn't really take off until 2001, when a screenwriter named Lindsay Smith wanted to find an alternative to cutting down trees whose roots were tearing up the sidewalks in Los Angeles.

She called the public works departments of other cities to see how they handled this problem. When she was talking to a public works official in Santa Monica, whe wondered why they couldn’t just use a material that would bend around tree roots instead of breaking.

"And he said, ‘Why, we have somebody here in the city who has been experimenting with rubber,’ Smith recalls. "I hopped in my car. And that was the beginning."

Smith now runs a small company called Rubbersidewalks, Inc. that sells rubber panels that link together. The panels are about an inch thick and are made out of recycled tires, but they're not black and rubbery; they're gray and kind of pebbly. And they're hard -- much harder than the panels you might find in a playground.

Rubber sidewalks are now being tested in sixty cities in fifteen states. John Thomas, the chief arborist for Washington, D.C., says that in this city, some of the panels went in under a row of giant willow oaks on Rhode Island Avenue, a busy city street. Giant willow oaks are notorious for ripping up the concrete sidewalk.

"And we’ve done everything in the past from patching and cutting and repouring, and it’s just a perpetual problem that just goes on and on and on," Thomas says.

Earlier this week, workers took up the sidewalk and put rubber panels around several of the trees. Thomas says water can seep into the seams between the panels. That means tree roots don't have to be as pushy in their search for nutrients. And even if the roots do start to bend the panels, workers can take the rubber up, regrade the path, and lay the sidewalk down again.

"It's a win-win for the tree, for the citizens, and it looks like concrete as well," Thomas says. "It's hard to tell that it's rubber."

His boss agrees. Michelle Pourciau is acting director of the city's transportation department. She says that the rubber costs about one-third more than regular concrete.

"I love the way they look," Pourciau says. "And who knows? In the future, if the cost goes down and it truly lasts, it might be the new sidewalk treatment all over the city."

At this point, Pourciau says she doesn’t see any real disadvantages to using rubber.

But some residents say they hate the rubber sidewalks.

"You can see the appearance of it just doesn’t look right," says Genola Williams, who lives in one of the Victorian row houses on the block. "In fact, I thought this was temporary, and that they were going to come out and put the concrete down. But no, I'm not pleased with this at all."

"It’s like being at the playground," Toya Coles says. "And that’s not a nice feel, to come out of your historical, half-a-million-dollar home into the playground."

Regardless of what some adults think, kids probably won't mind the rubber. You can still draw on the sidewalks with chalk and they're excellent for jumping rope. But if you want to write your name in wet cement, you're out of luck.