Accessibility links
Organic Apple? Check. But Is It Local? As mega-retailers like Wal-Mart begin to jump on the organic food wagon, organic agriculture is growing into a huge agribusiness. Foods are shipped thousands of miles to market. But the new trend for socially and environmentally conscious shoppers is to buy locally produced food.

Listen
Organic Apple? Check. But Is It Local?

As mega-retailers like Wal-Mart begin to jump on the organic food wagon, organic agriculture is growing into a huge agribusiness. Foods are shipped thousands of miles to market. But the new trend for socially and environmentally conscious shoppers is to buy locally produced food. 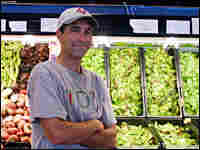 When you sit down to dinner tonight, think about this. On average, an item of food travels at least 1500 miles from farm to table. But that distance may be starting to shrink as more and more Americans develop an appetite for locally raised food.

It's a beautiful summer day and vendors at the Missoula Farmer's Market are doing a brisk business. Ann Emons(ph) is stocking up on locally grown organic vegetables.

Ms. ANN EMONS (Missoula resident): I think organic is important. I think supporting organic growers is important. And we buy locally because it takes commitment and work from all of us to keep this community looking this way.

WITKOWSKY: But farmer Josh Slotnick(ph) likes to point out that organic isn't necessarily the same thing as local.

Mr. SLOTNICK: Fifteen years ago, organic was the way to differentiate our food from the large scale conventional growers. Now what's happened is organic has become large scale.

WITKOWSKY: And that means that even many of the organic products you see in grocery stores are shipped long distances.

WITKOWSKY: Just like the ones on display here at the local health food store.

WITKOWSKY: That local label is Slotnick's way of distinguishing his connection to the community and his commitment to sustainable farming practices, which go beyond what is required for organic certification.

WITKOWSKY: That's a growing sentiment around the country, according to Brian Halweil. He's a researcher who tracks food and agriculture for World Watch Institute.

WITKOWSKY: Halweil says Americans desire to reconnect with their food and the people who grow it is driving a nascent local foods movement.

Mr. HALWEIL: It's a small movement right now, but it's growing very rapidly and its begun to move beyond the culinary fringe.

WITKOWSKY: In other words, beyond farmer's markets, upscale restaurants and independent retailers. Cafeterias in schools, colleges and hospitals are serving locally raised products. So are major grocery stores, including Wal-Mart, which has featured local apples, potatoes and other produce in its New York state stores.

NORRIS: Whole Foods' James Parker says the company will host weekly farmer's markets in its parking lots, and give its regional buyers more autonomy to purchase from local suppliers. Buying locally can be more time consuming than going through large distributors, but the company sees it as an investment.

Mr. PARKER: This is about our future as much as it is about the future of the small family farm or the small cottage industry. We want to support production of food everywhere.

NORRIS: That's because rising fuel costs are likely to make long distance shipping impractical for some commodities. Plus there are issues of fair trade, land use and pollution to consider.

Whatever the reason, World Watch Institute's Brian Halweil is delighted that Americans are even being to think about the broader implications of their diet.

Mr. HALWEIL: Finally, here's a reason for Americans to be curious about their food, and just not the number of calories or carbs it contains, but who grew it, how it was grown, where it was grown and how the landscape was used.

WITKOWSKY: No one expects kiwis or bananas or coffee to disappear from the American larder. And there will probably always be consumers who insist on fresh asparagus or strawberries in the depths of winter. But local food advocates are hoping to give shoppers something else to chew on.