Accessibility links
Johnny Cupcakes Finds Sweet Success in T-Shirts John Earle has turned what began as a joke into a thriving business on Boston's hip Newbury Street. His cupcake-themed T-shirts, at $40 to $70 each, are a lesson in the power of viral marketing and brand building. 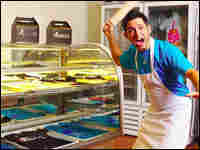 The Mad Buzz Baker: John Earle, above, started the "Johnny Cupcakes" brand as a joke. Now his cupcake-themed T-shirts, at $40 to $70 each, are flying off the shelves of his store on Boston's chic Newbury Street. Photo: Dave Green hide caption

Johnny's Do's and Don'ts for Starting Your Own Business

Don't rush. First impressions are everything. Don't release any product unless you know for sure it's as good as you can get it to be.

Don't get bummed out if you go broke. You have to spend money to make money.

Get a catchy domain name. Do something different, original, and memorable. Take your time coming up with a name.

Try to limit/not mass produce anything. Everyone wants what nobody has.

Be prepared to toss out any relationships or hobbies, if need be. You have to put 110 percent into building any company. You need to get your own act together before taking on a relationship.

Focus, focus! Living a drug-free, alcohol-free lifestyle my whole life has enabled me to save money, think straight, live healthy, focus more, and use my time wisely. I'm not saying do what I did, I'm just pointing out that you're going to have to make your company your first priority.

Personalize your online orders. Johnny Cupcakes shirts are wrapped in special cupcake tissue paper, and usually come with a Ninja Turtles or Garbage Pail Kids card. Taking a couple of extra minutes to do that puts a gigantic smile on someone's face! 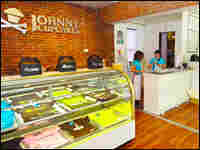 At just 24 years old, Johnny Cupcakes is still as much of a prankster as he is an entrepreneur.

He made his first buck selling whoopee cushions in junior high. So it's not surprising that, when it came time to open his own store, on Boston's Newbury Street, Johnny set it up like a well-laid trap: He planted a giant dough machine in the window, and made sure the glass bakery cases and stainless-steel cooling racks were visible from the street. All day, hungry passers-by come in asking for cupcakes.

And, all day, Johnny tries to contain his amusement as he explains he has no cupcakes for sale.

Instead, his baker's racks hold brightly colored T-shirts, each with the image of a cupcake where you'd least expect it: the Statue of Liberty holding a cupcake; Marilyn Monroe with a tiny cupcake-shaped mole; and the cupcake-and-crossbones motif that has become the store's signature design. At $40 to $70 a piece, the tees are selling like, well, hotcakes. And the guy who's most surprised is Johnny himself.

His real name is John Earle. And in a serious moment, he'll tell you this whole enterprise started as a joke: After a friend gave him the nickname "Johnny Cupcakes," he made a T-shirt for laughs. Almost immediately, people started asking for one, and Earle started printing more and selling them -- first to friends from the back of his car, and then to strangers on the Internet. He was clever enough to give them to some musicians when he was traveling with his band, and when a few showed up wearing them on MTV and VH-1, "Johnny Cupcakes" was officially hot. By the time word spread online that Earle was opening a store on Boston's chic Newbury Street, more than 500 people lined up around the block to get in.

"It's just got this really big cult following that keeps growing and growing," Earle says of his T-shirts' viral-marketing success. "They'll buy one of everything. And every time I'm here, people will ask to get their picture taken with me. They'll ask for my autograph. It's just word of mouth. It's unbelievable."

As his business emerges from the underground, Earle is trying to keep his shirts sought after by making limited editions.

"People want what no one else has," he says. But he's the first to admit a little shock at how quickly people have bought into this whole cupcake thing, and how many want to see his designs as more than they really are.

"People come in and they're like, 'I don't get it,'" Earle says, "and there's nothing really to get about it. It's just a cupcake. It is what it is. It's just cupcakes."

The whole thing intrigued Babson College business professor Glenn Kaplus, so much so that he invited Earle to speak to his entrepreneurship class. He says Earle's "brazen" decision to open up on Boston's hippest, hottest shopping strip is exactly what he needed to do to build his buzz and his brand.

"You've got to shake your head and say, 'Wow. This is just amazing,'" Kaplus says. "There is a certain cache that he is building that has people saying, 'Wow. This is really something.' But it all starts with saying, 'You know, listen, I have the chutzpah to put this on a shirt and say it's something.' You know, like, it isn't just soap, or whatever."

Earle may have pulled it off especially well, Kaplus says. "But isn't almost everything that way?" He observes, "Until you've done it, you're really faking it until you make it."