Accessibility links
Jazzman Allan Harris Tells a Cowboy Tale His song cycle Cross That River tells how African Americans helped shape the western frontier. The CD is part of a project that includes a novel, a musical and plans for an educational offering in Harlem schools. 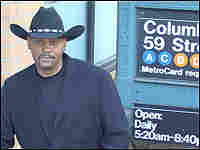 From NPR's Studio 4A

In jazz circles, singer Allan Harris is known as a crooner who favors old standards, including show tunes. Think Frank Sinatra or Tony Bennett. But his newest project is quite a departure. The songs in Cross That River tells the story of the African-American cowboy.

It's a song cycle, starting in the Deep South with slaves longing to find their way West, where they expect to find freedom. Each song moves the story along... and there's more to come. The CD is one leg of a three-part project. There's a novel and a musical is in the works.

Harris, who grew up in Brooklyn, enjoyed watching westerns on TV with his father. He says the project taught him quite a bit about the role African Americans played in conquering the western frontier. He plans to pass some of that knowledge along by using Cross That River as a teaching platform for students in Harlem schools.