Accessibility links
Newark Mayor: New Black Leaders Must Innovate Cory Booker is the new mayor of one of the nation's largest majority black cities. Booker says he hopes to be among the new generation of African-American leaders known for being dynamic innovators. 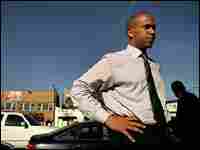 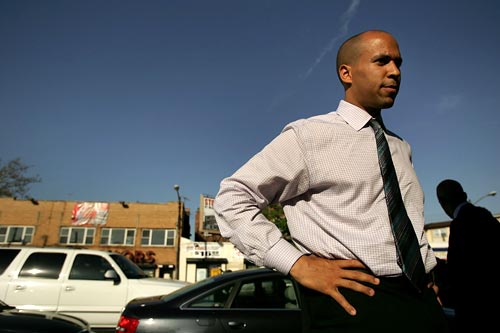 Although he could afford more, Cory Booker, an Oxford and Yale-educated lawyer, chose to live in one of Newark's downtrodden neighborhoods. Booker, the recently elected mayor of Newark, N.J., lives in a public housing project with no hot water and no heat in the winter.

"It's a little challenging living," Booker tells Steve Inskeep. "But for me what is an inconvenience, to a lot of residents that live there it's [an] issue of life and death."

Booker notes that while the black middle-class has grown since the 1960s, African-Americans living in poverty haven't seen much improvement in their lives.

"We could all sit and talk about the historical causes for where we are, we can talk about the geopolitical causes, the massive shifts economically in our global economy. But, more productively, my question as the mayor of New Jersey's largest city and one of the majority African-American cities is, where do we go from here?"

Booker says his top goal is to tackle the city's soaring crime rate. One answer, he says, is halfway houses and other alternatives to incarceration. He says they can be very effective in reducing recidivism.

Booker says he's a member of the new generation of black political leaders that he hopes will be known for being dynamic innovators.

"The folks in my generation of political leaders, we owe it to the ones that came before us to change the culture, to adapt, to evolve, to reexamine," he says. "That's what we've been doing in the black community for generations in this nation, and that's what we're going to continue to do as we go forward."

Are African-Americans focusing too much on racism?

"I think you can't ignore racism. People who try to do it will undermine their ability to deal with the problems. We have to be an honest nation and be candid. There are real racial realities that we have to be honest and talk about. But we cannot let people use it as a way to divide us. It must be used in a way that unifies us around common principles."