Accessibility links
Diplomacy Inches Forward in Lebanon Conflict Fighting in Lebanon between Israel and Hezbollah continues unabated, with Israel destroying two major buildings in Beirut on Monday night. An offer by the Lebanese government to send 15,000 of its own troops into the country's south was termed "interesting" by Israel's prime minister.

Fighting in Lebanon between Israel and Hezbollah continues unabated, with Israel destroying two major buildings in Beirut on Monday night. An offer by the Lebanese government to send 15,000 of its own troops into the country's south was termed "interesting" by Israel's prime minister. 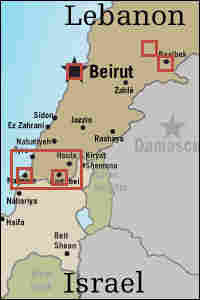 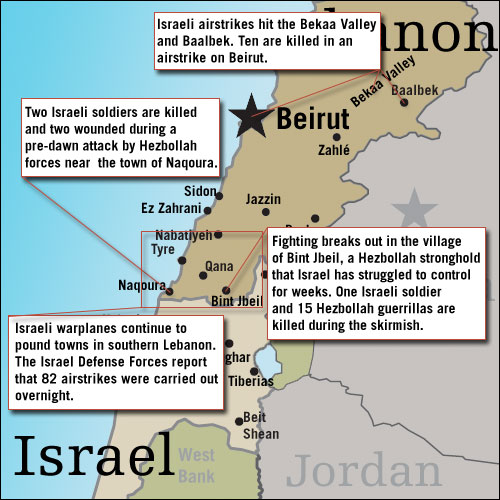 Two Israeli soldiers were killed in a Hezbollah attack in Naqoura. In Beirut, 10 die in Israeli airstrikes.

And I'm Renee Montagne. The fighting between Israel and Hezbollah continues after Lebanon rejected a ceasefire proposal backed by France and the U.S. Arab League officials will be at the U.N. today to press for changes to a draft resolution that would seek an immediate Israeli pullout from Lebanon. The U.S. ambassador to the United Nations, John Bolten, has said any resolution made at the present time would have to be a compromise.

Ambassador JOHN BOLTEN (U.S. Ambassador to the United Nations): If you could write a resolution that in every respect satisfied every party, you probably wouldn't be in a crisis now. So the effort has to be not to achieve perfect agreement or to completely satisfy anyone - because that's not possible at the present juncture - but to take the concrete steps we need to get on the road to a lasting solution.

MONTAGNE: For more on the situation in Lebanon, we turn to NPR's Ivan Watson in Beirut. Hello.

MONTAGNE: So there has been more fighting in Lebanon south and air attacks in Beirut. What more can you tell us about the fighting?

WATSON: Renee, around sunset last night, we heard massive explosions at the southern end of the city. The air strikes - a series of air strikes - brought down two four-story apartment blocks in southern Beirut in a densely populated part of town. This is what it sounded like this morning as rescue teams tried to dig through that rubble.

WATSON: As you can hear, Renee, there was a bulldozer at work. They were a crowd of about 100 people. Varying reports on how many were killed there - from 14 to as high as 28, the death toll there. And we saw this scene repeated in another town in Lebanon yesterday after Israeli air strikes brought down three houses in the coastal town of Gazea(ph). It can take hours to pull bodies or pieces of bodies out from underneath the concrete and steel.

MONTAGNE: And Ivan, yesterday, Lebanon offered to deploy 15,000 troops to the border to help enable a ceasefire. And then today, Israel's prime minister called the offer, quote, an interesting step worth reviewing. Not exactly a rousing endorsement, but what else can you tell us about the diplomatic efforts?

WATSON: Late last night, the Lebanese government - which includes two Hezbollah ministers in the cabinet - voted unanimously for a proposal to deploy 15,000 Lebanese Army soldiers along the southern border with Israel to help remove the threat - Israel feels - from Hezbollah guerillas in that area. But this decision would be contingent - the government says - on Israel withdrawing its soldiers from land captured in southern Lebanon over the past three-and-a-half weeks of fighting. The cabinet decision calls on the United Nations to help implement this procedure, and it is likely that the Arab delegation meeting with the United Nations Security Council today will be pushing for this proposal.

MONTAGNE: And despite diplomatic efforts, Israel's defense minister has told his forces to prepare to move deeper into Lebanon for an operation to control all of Hezbollah's launching sites. Talk to us about that.

WATSON: Well, U.N. peacekeepers say the fighting has intensified along the border, Renee. There are clashes all the way from the Mediterranean Coast in the west all the way up to the east. Hezbollah continues to fire more than 100 rockets a day at Israel, and the scope of Israeli air strikes appears to have expanded. Some of the areas that we thought were safe zones - such as the center of the city of Tyre in southern Lebanon - are now being repeatedly pounded by Israeli warplanes.