Accessibility links
Lebanese-Americans Are Angry and Anxious Dearborn, Mich., just outside Detroit, is home to the largest Lebanese community in America. Residents here are passionate about the crisis in the Middle East.

Listen
Lebanese-Americans Are Angry and Anxious 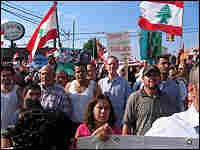 About half of Dearborn's Arab community turned out for a July 18 rally. Guy Raz, NPR hide caption

This is the first of a two-part series about Metro Detroit's response to the Middle East crisis. The second story focuses on the Jewish-American community of Detroit.

The Islamic Center in Dearborn is the largest Shiite mosque in the country. Guy Raz, NPR hide caption 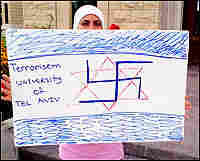 During daily protests in Dearborn, MI, some do not hesitate to compare the actions of Israeli forces to those of Nazi soldiers. Guy Raz, NPR hide caption 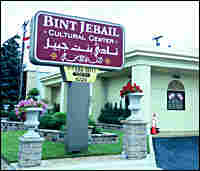 Naim Bazzi sits with about 14 other Lebanese men in a circle in the front living room of his house in an upscale part of Dearborn, Mich. The town is home to the nation's largest Lebanese-American community. Some of the men finger Islamic prayer beads; all are somber. They are here to mourn, to pay respects.

Bazzi left Lebanon in 1976; his parents stayed behind. Last week, Bazzi lost his elderly mother, Amina, in the southern Lebanese village of Bint Jbeil. She was too old to leave when fighting broke out.

Bazzi lost contact with his parents. But a few days ago, he was watching al-Jazeera when he saw his elderly father being interviewed.

Bazzi says he watched his father describe his mother dying in his arms, weakened by a lack of water and of medication -- the blood thinners and kidney medications she relied on.

"All these details I found out from the television, from what my father was telling the reporter," Bazzi says.

Bazzi wasn't the only person in Dearborn with a personal stake in the Mideast conflict. He is among 10,000 people who have roots in the Lebanese village of Bint Jbeil.

A Community in Shock

Along Warren Avenue, the nexus of Arab Dearborn, Lebanese flags flutter everywhere. Nearly every sign is in English and Arabic. Some bear familiar names. The Shatila Bakery is named after an infamous Beirut slum.

Most Arab-Americans are Christians. But in Dearborn, the majority are Shiite Muslims from southern Lebanon and Iraq. It's not uncommon to see fully covered women strolling down the sidewalks.

The Islamic Center in Dearborn is the largest Shiite mosque in the country. Recently, about a dozen families have visited the mosque to speak with community therapists. All had just returned from Lebanon.

Dr. Adnan Hammad says since the crisis began a month ago, the community mental-health clinic has been inundated with new patients.

The conflict that has left parts of Lebanon in ruins has had an immeasurable impact on this community. Some in Dearborn believe Hezbollah made a mistake by attacking Israel. But the fighting has also coarsened the rhetoric in the city.

Osama Siblani runs the Arab-American News, America's largest such newspaper. He says the fighting is fueling anger in his community -- not at Hezbollah, but at the Bush administration.

"The anger that you see in the Arab community, you do not see in the eyes of the American community," says Siblani. "They're not viewing the same thing. And the perspective you get out of Jazeera or Arabiya, you do not get it out of Fox News or CNN."

Siblani says many in the community who opposed Hezbollah before the fighting have now changed their minds. The U.S. State Department has designated Hezbollah a terrorist organization. Siblani disagrees.

"The terrorist here is the Bush administration," he says.

Daily protests occur in Dearborn. At one recent demonstration, organized by the Congress of Arab-Americans, about 1,000 people attended. College-age men asked, in call and response fashion, "Who is your army?" Protestors responded: "Hezbollah." "Who is your leader?" they were asked. "Nasrallah," the chanters responded. Many carried placards of the Hezbollah leader. A few days earlier at an even larger demonstration, more than 15,000 turned out, about half of Dearborn's Arab community.

Those who regularly attend the demonstrations tend to be the most strident.

"Oh, Jews, remember Khaibar," the marchers chant. "The army of the Prophet will return."

The line is a reference to Khaibar, a Jewish town north of Medina that, according to Islamic tradition, was overtaken by the Prophet Muhammad in the seventh century. Once defeated, the surviving Jews of Khaibar were forced into serfdom. Two decades later, they were expelled from the Arabian peninsula.

Abed Hammoud came to Dearborn from southern Lebanon in 1990. His hometown is just a few miles from the Israeli border. His day job is assistant county prosecutor, but his passion is advocating on behalf of the Congress of Arab-American organizations.

Hammoud regards Israeli airstrikes as "war crimes and atrocities" -- attacks he does not hesitate to compare with Nazi Germany.

"The Nazis used to kill, especially Jewish people, using the ovens and the concentration camps," he says. "The Israelis use F-16s and burning bombs and smart bombs. I'm sorry. A death of a child is a death of a child."

Nasser Beydoun balks at that comparison, but remains deeply troubled by the fighting. Beydoun runs the American Arab Chamber of Commerce and has worked closely with the Jewish community in the past.

Now that the war raging on, he says, that relationship is being tested.

"What bothers me the most is that I, as an Arab-American leader, will condemn actions that I feel are morally wrong or repugnant," Beydoun says. "But, in the Jewish community, there is a wall of silence that Israel can do no wrong, and if they do wrong, we can't publicly condemn it."

Beydoun believes that ultimately, the tension will subside and the relationship will continue. Right now, the anger and the enmity is very real and very raw. And that is something that deeply troubles Detroit's dwindling Jewish community.

In the second part of this series, which airs Wednesday on All Things Considered, we'll hear from Metro Detroit's Jewish community.